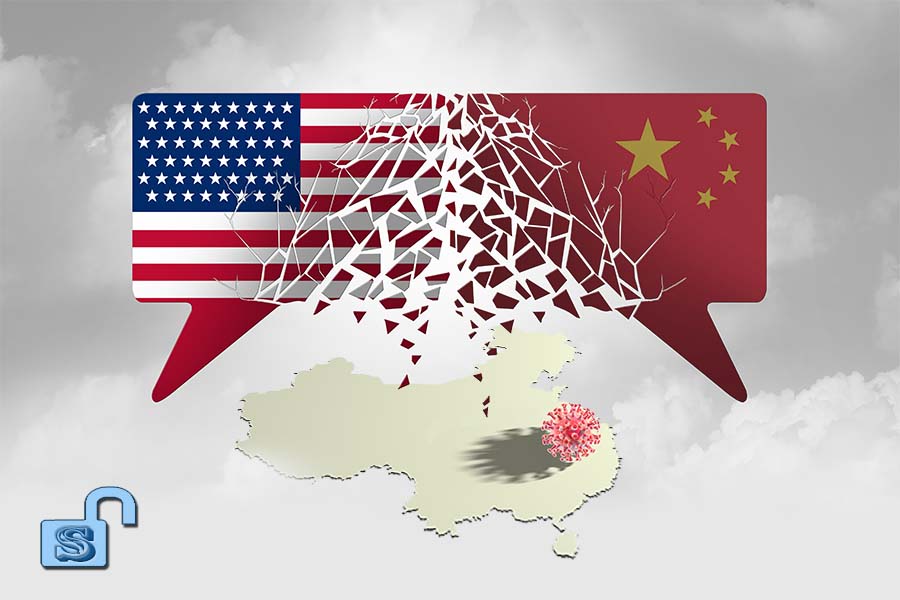 Geopolitics Watch: Why the CCP is Provoking America with Coronavirus Disinformation

◎ The CCP is now aggressively distracting, “brainwashing,” and “strong-arming” the Chinese people and the world into “forgetting” that it caused the coronavirus pandemic, to instead show “gratitude” to the PRC for “saving” them.

According to a one-paragraph statement on the call released by the U.S. State Department, Secretary Pompeo “conveyed strong U.S. objections to PRC efforts to shift blame for COVID-19 to the United States” and “stressed that this is not the time to spread disinformation and outlandish rumors, but rather a time for all nations to come together to fight this common threat.”

PRC state mouthpiece Xinhua’s statement on the Pompeo-Yang call ran for five paragraphs, three of which contained propaganda and disinformation about how the CCP had handled the epidemic outbreak, as well as the U.S. effort to counter CCP disinformation about the origins of the coronavirus.

Why is the CCP risking the escalation of Sino-U.S. tensions and reduced bilateral cooperation on tackling the coronavirus by using a diplomatic phone call where the U.S. side attempted to address the issue of CCP disinformation to double down on spreading disinformation and propaganda?

Survive and dominate
We previously explained that survival and domination are two sides of the same coin for the CCP (see here and here). The coronavirus epidemic is an existential threat to the regime and is derailing the CCP’s domination agenda because:

a) The Chinese people will blame the CCP for endangering their lives and impoverishing them with its poor early response to the outbreak. The economic consequences of the epidemic are potentially more devastating for the CCP than the coronavirus—while it has no qualms with sacrificing the well-being of Chinese citizens as it uses draconian measures to curb the epidemic, the CCP has to keep delivering economic results for the Chinese people or risk losing its political legitimacy.

b) The world, fearing another deadly and crippling outbreak in the PRC, will eventually seek to hold the CCP accountable for a global pandemic and partially “decouple” economically from China.

Thus, to survive and dominate, the CCP is now aggressively distracting, “brainwashing,” and “strong-arming” the Chinese people and the world into “forgetting” that it caused the coronavirus pandemic, to instead show “gratitude” to the PRC for “saving” them. By deploying the levers of propaganda and disinformation, foreign relations, and trade and production, the CCP is creating up so much smoke that the Chinese people and the world are at risk of neglecting the fire—the origin of the smoke—as they endeavor to clear away the smoke to see better.

Below is a non-exhaustive list of what the CCP has been doing to distract, “brainwash,” and “strong-arm” its audiences:
1. The CCP is painting itself as the “savior of the world.”

2. The CCP is shifting its narrative of the origins of the coronavirus.

3. The CCP is promoting the notion that it is “racist” to use the term “Wuhan virus” or “Chinese virus” in referring to COVID-19.

4. The CCP is tapping into its “Red Matrix” and “Great External Propaganda Plan” (大外宣) to push or coordinate the spread of its propaganda and disinformation.

5. The CCP is using its control over production to hold other countries “hostage.”

6. The CCP is preparing a Fourth Taiwan Strait Crisis.

Solutions
1. In our emergency warning on the Wuhan coronavirus outbreak on Jan. 24, we offered three ways in which the world should respond to avert a serious humanitarian and human rights crisis in China and the world. All three ways are still relevant today, particularly the need for the U.S. and the world to “press the PRC to release accurate information about the Wuhan virus” and “call on the CCP to immediately curb its propaganda and influence efforts to sway the global narrative on the virus outbreak.”

2. The U.S. and the world must press the CCP to allow impartial investigations into the inconclusive origins of the coronavirus in China.

3. The Trump administration’s strategy of referring to COVID-19 as the “Wuhan virus” or “Chinese virus” to counter CCP propaganda is a “best of the worse” option. While factually accurate, there is still a risk that real racists in America and elsewhere could latch on to the U.S. reference as an excuse to attack overseas Chinese (not the PRC/CCP) and other East Asians in places where they are a minority.

A more effective way to do counter propaganda would be to refer to COVID-19 as the “PRC virus” or “CCP virus” (中共病毒) or even the “CCP pandemic” (中共瘟疫). “PRC” refers to the communist regime in China instead of to an ethnicity. Meanwhile, the CCP can rightly be faulted for causing an epidemic in China which developed into a pandemic due to its poor early response—the regime did virtually nothing for two months and instead allowed about 5 million people to leave Wuhan without being screened when the coronavirus was already spreading.

Figuring out the best way to label COVID-19 for counter propaganda purposes, however, is what Sun Tze would refer to as the “worst policy” of “besieging walled cities” (其下攻城). The U.S. needs novel strategies to “balk the enemy’s plans” (上兵伐謀), rectify the international narrative on the coronavirus, seize “discourse power” (搶奪話語權) away from the CCP, and put it on the defensive. SinoInsider has those novel strategies.