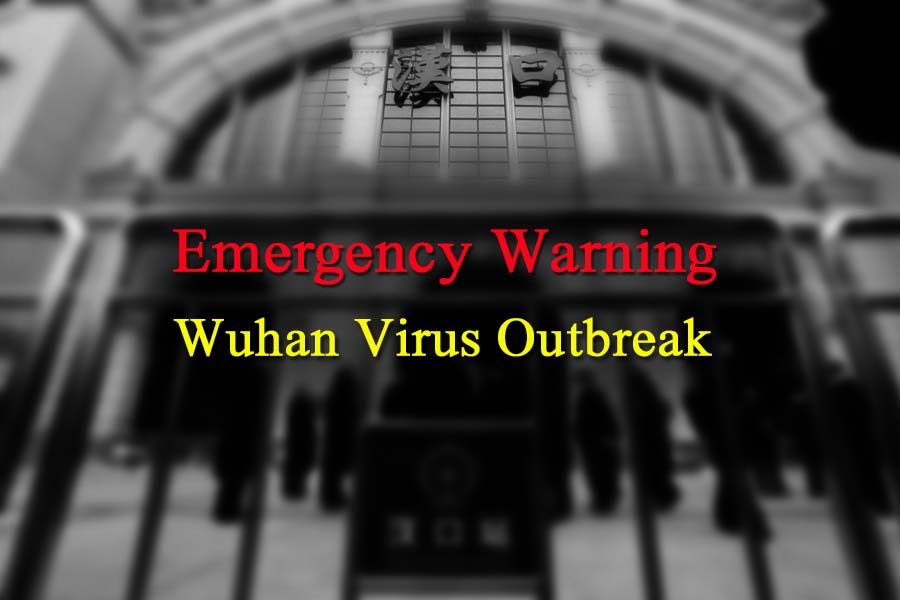 ◎ We believe that there is now a serious epidemic in Wuhan and the beginnings of a humanitarian crisis in mainland China.

The People’s Republic of China officially confirmed on Jan. 20 that a new coronavirus which originated in the city of Wuhan in central China can be passed on from person-to-person. On the same day, PRC leader Xi Jinping made his first public remarks about the virus outbreak, which was first reported in December 2019.

At the time of writing, the PRC authorities have confirmed 878 cases of the Wuhan coronavirus and 26 deaths. The authorities have also taken the unprecedented step of placing 12 Chinese cities on lockdown, including the virus epicenter of Wuhan. People’s Armed Police troops were spotted regulating people’s movement at Wuhan’s train stations.

A serious epidemic
Based on our understanding of Chinese Communist Party culture, its past handling of medical incidents of concern (the SARS epidemic, organ harvesting of prisoners of conscience, etc.), and the CCP’s prior practice of admitting to damaging information when it has something even bigger to hide, we have strong reason to believe that the PRC authorities, despite having admitted to the Wuhan virus outbreak, are continuing to cover-up the full extent of the public health situation. (For further analysis, see here and here.)

In reviewing the CCP’s response to the Wuhan virus, as well as various news reports and information on Chinese social media, we believe that there is now a serious epidemic in Wuhan and the beginnings of a humanitarian crisis in mainland China:

1. The PRC authorities are locking down cities, but did not take similar drastic measures during the SARS crisis. This alone is evidence that the Wuhan virus outbreak is very severe.

2. The number of officially confirmed cases and deaths caused by the Wuhan virus have rocketed into the hundreds within days after the PRC authorities affirmed that the new coronavirus can be transmitted from human-to-human. The “spike” in cases suggests that large numbers of people have been infected but the authorities are controlling the release of information to avoid a panic.

3. Videos are circulating on Chinese social media of jam-packed hospitals in Wuhan, frontline medical staff breaking down into hysterics from overwork, and people collapsing in the streets. There are also accounts of how hospitals in Wuhan are out of fever wards, face masks, and other medical supplies, as well as the woeful quarantine and isolation of patients in hospitals and so-called “home quarantine” measures. Chinese netizens have begun describing the Wuhan situation as a “humanitarian crisis” and some have taken to social media to post “distress calls.”

4. Wuhan mayor Zhou Xianwang was severely criticized by the public for allowing a Lunar New Year gathering of more than 40,000 people on Jan. 19 to go ahead when 62 cases had already been reported. Zhou was also slammed for belatedly canceling other public events to mark the Lunar New Year. Some Chinese citizens are calling for Zhou’s resignation.

5. Guan Yi, director of Hong Kong University’s State Key Laboratory of Emerging Infectious Diseases, told Caixin magazine in an interview on Jan. 23 that by his “conservative estimate,” the Wuhan virus epidemic “could end up at least 10 times the scale of SARS.” Officially, the SARS epidemic saw 5,327 confirmed cases and 349 deaths; unofficial estimates place the confirmed cases in the hundreds of thousands and deaths in the tens of thousands.

By conservative estimate, there could now be tens of thousands of cases and thousands of deaths caused by the Wuhan virus. Given the CCP’s response to the virus outbreak thus far, we believe that the epidemic could potentially impact hundreds of thousands to millions of people in China.

Forecasting the CCP’s response
In our China 2019 outlook, we predicted that “contagious diseases could break out on the mainland” and that the PRC authorities will only divulge more information about a disease outbreak when the situation becomes “too problematic to cover up.”

In our China 2020 outlook, we predicted that “A variety of highly contagious diseases affecting both humans and animals could break out and spread across China. The PRC will attempt to conceal the various epidemics until the situation is dire. We do not rule out the possibility that the PRC will use unethical means to contain the spread of the diseases and eliminate the epidemics.”

We derived the predictions above using our China political risk assessment model, which accounts for CCP culture and characteristics, CCP operations, and factional struggles in the CCP. In considering CCP culture, the PRC authorities can be expected to respond to the Wuhan virus outbreak in the following ways:

1. The CCP will simultaneously become more “transparent” in releasing information about the Wuhan virus outbreak (such as “allowing” semi-official media and pro-CCP media in Hong Kong and overseas Chinese language to report on some controversial aspects of the Wuhan virus) while still covering up the more serious developments (such as the mistreatment of patients, food and medical supply problems, the actual confirmed cases and death count, etc.).

3. Propaganda is part of “stability maintenance.” Domestically, the CCP will downplay the severity of the Wuhan virus outbreak, tightly control the release of information about the epidemic to the public and international health bodies, and make disingenuous comparisons between the situation in China with that of other countries (already, Party and state media are claiming that thousands of people die of the flu-related causes in America each year without providing proper context). Externally, the CCP will try to depict itself as a “responsible world power” by “promptly” informing the globe of the virus outbreak, as well as tap into its “Red Matrix” to influence the global narrative on the virus outbreak and spin the PRC’s handling of the epidemic in a positive light.

4. There is a chance that the PRC authorities could lockdown key first-tier cities like Beijing, Shanghai, Tianjin, and Guangzhou to better contain a serious epidemic.

5. Given the shortage of fever wards in hospitals, local governments could increasingly turn to “home quarantine” as a measure to contain the spread of the epidemic. “Home quarantine” currently entails the infected staying in their homes with no access to proper medical attention and in danger of spreading the virus to those living with them, to neighbors, and to those they come into contact with when making trips to and from the hospital.

6. The CCP has a penchant for spinning calamity into “victory” or less negative news (see the Long March, the Great Leap Forward, the Cultural Revolution, etc.). Thus, it should not be surprising if the PRC later blames China’s economic decline on the Wuhan virus outbreak instead of admitting to making bad economic decisions or the Sino-U.S. trade war. It is also very CCP to acknowledge the seriousness of the virus outbreak only after several countries reported cases; per CCP logic, when other countries are focused on tackling the virus at home, there would be comparatively less international scrutiny on how China is handling the epidemic at home.

Epidemic fallout
A serious epidemic in Wuhan and other cities bring substantial risks for China, the CCP regime, and the world. We list some key risks below.

China
1. A severe humanitarian and human crisis on the mainland.

The CCP regime
1. Serious erosion of political legitimacy when the Chinese people discover the CCP’s mishandling of the Wuhan virus outbreak.

2. Incapacitation of the “stability maintenance” apparatus (domestic security forces and the military) due to the spread of the virus.

3. Steep escalation of the “you die, I live” factional struggle in the CCP elite.

The world
1. Emergence of a global public health crisis.

2. Disruption of supply chains in China.

3. Significantly reduced exports of food and manufactured products from China.

4. If the CCP feels that it cannot cope with regime-threatening risks, it cannot be ruled out that the CCP could find ways to “weaponize” the Wuhan virus by engineering its spread to many countries; from the CCP’s perspective, when other countries are distracted with an epidemic, then there will be less international pressure on the PRC and the regime’s internal problems.

How the world should respond

From the CCP’s militarization of the South China Sea despite explicit promises not to do so to its denial of mass concentration camps in Xinjiang, the world has in recent years been made increasingly aware of the CCP’s untrustworthiness. If the world cannot get the CCP to come clean about its pernicious behavior and human rights abuses, then the world also cannot expect the CCP to suddenly become “more transparent” with the Wuhan virus outbreak.

To avert a serious humanitarian and human rights crisis in China and the world, the following responses can be considered:

1. The United States and other world governments should continually press the PRC to release accurate information about the Wuhan virus; call on the CCP to immediately curb its propaganda and influence efforts to sway the global narrative on the virus outbreak; and sternly caution the PRC against taking “public health” measures that would result in a humanitarian and human rights crisis in China.

2. The World Health Organization should declare China an emergency epidemic zone; sanction the dispatching of international medical experts and staff to China to investigate the virus outbreak and help with the medical situation on the ground; ship face masks and other medical supplies to China; and step up action to prevent the coronavirus’s spread around the world.

3. Businesses, investors, scholars, and other China influencers should publicly and privately urge the PRC government to release accurate information about the Wuhan virus and avoid causing a humanitarian and human rights crisis in China.