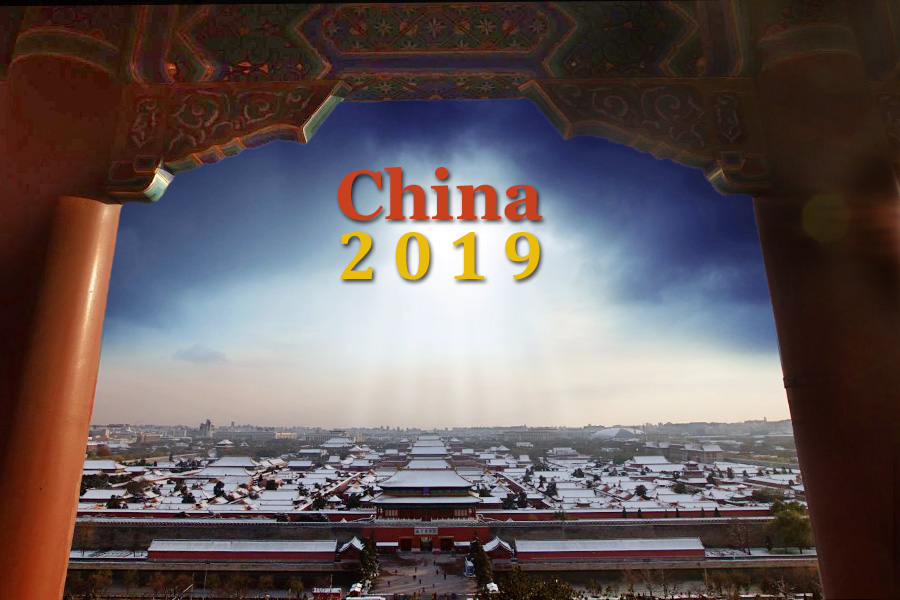 With the trade war well underway, an escalating factional struggle in the Chinese Communist Party, and the revolution in U.S. policy towards China, we believe that 2019 will see even more turbulence in China and the world than 2018.

We expect to see three broad trends in 2019:
1. 2019 will be a year of decisive battle between China and the United States. U.S. policy will determine the battle outcome.

2. Sino-U.S. relations will be tense. China will be increasingly isolated by the international community and the CCP’s expansionist agenda will hit a brick wall. Meanwhile, the U.S. will continue to reshape the CCP-hijacked world order.

3. China could see political Black Swans and charging Gray Rhinos in the economic and social arena. The CCP regime will likely face immense challenges from inside China and abroad. 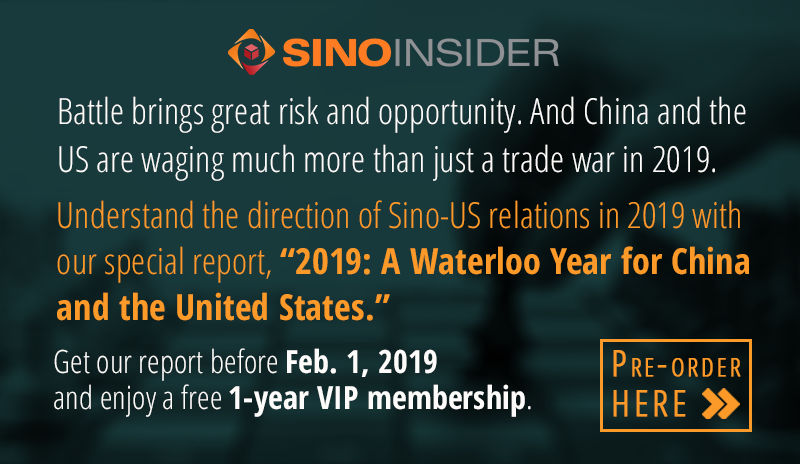 We present our 2019 China outlook.

1. The CCP factional struggle will escalate. Retired members of the Politburo and its Standing Committee may even be purged. Serving senior officials are also at risk of being investigated.

2. Xi Jinping remains at risk of being targeted by coups from political rivals. Xi’s supporters will likely also be targeted by political opponents if they are responsible for policy failure.

3. Personnel reshuffles should occur frequently throughout the year, with a younger generation of officials being promoted in large numbers to more senior positions.

5. A Black Swan event could imperil the CCP regime. (For more, see our 2019 special report.)

1. China’s economy will deteriorate across the board. Many key economic indicators could hit record lows.

3. The renminbi will likely drop below the level of 7 yuan to the U.S. dollar.

5. China’s capital outflows could be severe, and the authorities could tighten capital controls.

6. The central government may order more infrastructure projects, but will find it tough selling bonds to fund the projects.

7. The central government will introduce tax reduction measures, but will unlikely trim a proportionate number of government workers. As a result, corporate tax will be subtly raised, not decreased.

8. The central government will continue promoting reform and opening up, and may even implement bold reforms in Hainan Province.

9. China’s property market may see an increase in auctions and more homeowners may have difficulties in paying their mortgages.

10. Chinese companies may start selling off their property assets to pay off debt.

13. A few major property companies could file for bankruptcy.

15. Pledged shares are at high risk of a meltdown.

16. There is a possibility that big Chinese tech companies (not including Baidu, Alibaba, and Tencent) could collapse in 2019.

17. Some financial institutions may go bankrupt.

19. Foreign enterprises who primarily export to the U.S. may shift supply lines out of China or leave the mainland in large numbers.

21. The wave of unemployment will become more serious.

22. Food shortages may worsen, and the price of staple food may rise sharply.

23. The price of gold and silver in China will rise.

24. If Sino-U.S. relations improve, there is a chance that China’s economy will improve as well. Changes, however, may not be immediately noticeable.

2. A few PLA generals could be publicly investigated.

3. The PLA will strengthen its presence in the South China Sea.

4. The CCP’s military expansionism will be impeded by a worsening economy and the international isolation of China.

5. Barring major incidents in the CCP factional struggle, the scale and frequency of domestic military drills will likely be lowered in 2019.

1. Social tensions could become unprecedentedly fierce. Expect to see more rights defense incidents from disenfranchised individuals and groups, and even cases of police protests and petitions.

2. The CCP will clamp down harder on society, including implementing stricter controls over speech, further human rights abuses, and increased persecution of dissidents and religious groups.

3. Indiscriminate murders and “revenge on society” violent incidents could become more frequent and severe in 2019 as compared to 2018.

4. Aside from the African swine flu, other forms of contagious diseases could break out on the mainland. The authorities, however, will only divulge more information about a disease outbreak when the situation becomes too problematic to cover up.

1. The CCP will likely persist with its “carrot or stick” approach to pressure Taiwan to return to the mainland. CCP tactics include stepping up influence and interference operations to widen the divide in Taiwanese society; economic and military coercion; and further isolating Taiwan on the world stage by getting Taiwan’s allies to switch ties to Beijing, threatening foreign airliners or other companies that list Taiwan as a country, and other diplomatic action.

2. The CCP could offer attractive terms to the ROC government to sign a new consensus or peace treaty.

3. The CCP will likely step up military activity (sailing warships through the Taiwan Strait, sending jet fighter patrols, missile testing, etc.) near Taiwan to intimidate the ROC government. However, Beijing’s bark will likely be worse than its bite, and there is a very low probability of a military invasion of Taiwan in 2019.

1. The U.S. and China could hold a high-level summit in February. Xi Jinping may visit the United States.

2. China and the U.S. could reach a framework agreement which Washington finds acceptable by the end of the 90-day trade negotiation period in March. Further Sino-U.S. trade talks will be held.

4. The Trump administration will continue to reshape the current world order (in areas such as trade, military cooperation, diplomatic relations, etc.) and advance the isolation of the CCP regime on the international stage.

5. The U.S. could reassess Hong Kong’s status as a free port, and even consider reclassifying Hong Kong as part of the same customs territory as mainland China.

6. The CCP could downplay overt efforts to influence and interfere in American politics and society. However, the CCP could step up the scale and speed of covert subversion activities like espionage and cyber hacking.

8. The US. will continue challenging the CCP on human rights and religious freedom issues. Key perpetrators of persecution in China could face U.S. sanctions.

10. The U.S. will likely move to strengthen and deepen its relationship with Taiwan economically, politically, and militarily. For instance, the U.S. may sell advanced weaponry to Taiwan, and U.S. warships may dock in Taiwan.

11. As a result of the CCP factional struggle, the PLA might engineer near-collision (fighter jet or warship) or “misfiring” incidents to escalate Sino-U.S. tensions.

12. A Black Swan event could tip the Sino-U.S. confrontation in America’s favor, and produce one of two opposite outcomes in China. (For more, see our 2019 special report.)

China and the world

1. The CCP regime will come under U.S. military pressure as America withdraws from the Middle East and shifts forces to the Indo-Pacific region.

2. European countries will likely fall in step with the U.S. in curbing the CCP due to energy, national security, and geopolitical reasons.

3. The countries in the Indo-Pacific region could edge closer to the U.S. against China and more strongly resist CCP influence operations and other subversive activities.

4. U.S.-Russian relations may improve, and China will not benefit from the improvement.

5. There will be good progress in the peace and denuclearization process on the Korean Peninsula despite signs of “backsliding” from North Korea. Kim Jong Un will likely visit South Korea, and may have a second summit with President Trump to sign a joint peace declaration.