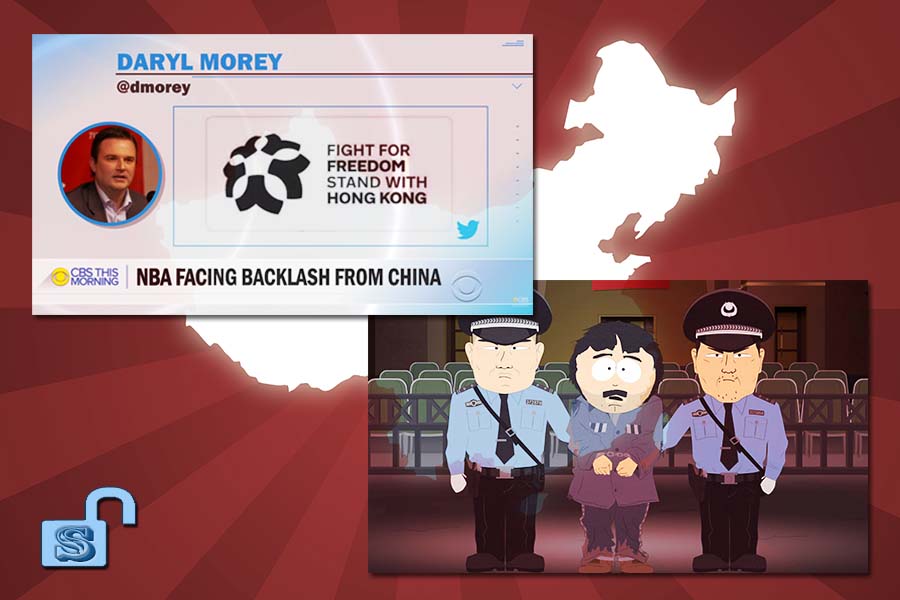 ◎ Within the span of a week, art imitated life and life imitated art regarding CCP censorship.

In August 2018, we observed that “America is paying greater attention to ideological matters in addressing the CCP threat.” Senior U.S. military and security officials have since been calling attention to the threat of the Chinese Communist Party and its ideology. This February, United States Indo-Pacific Command commander Philip S. Davidson said in a testimony before the U.S. Senate Armed Services Committee that “through fear and economic pressure, Beijing is working to expand its form of Communist-Socialist ideology in order to bend, break, and replace the existing rules-based international order.” In April, U.S. assistant secretary of defense for Indo-Pacific security affairs Randall Schriver said at an event at the Hudson Institute that there are “ideological battles” between the United States and China.

Recent developments concerning the National Basketball Association and the American adult animated sitcom South Park suggest that the ideological turn in Sino-U.S. relations is percolating down from the government level to the masses. We believe that this ideological turn will complicate the U.S.-China trade talks and have important geopolitical ramifications.

The backdrop:
On Oct. 2, South Park aired an episode titled, “Band in China,” that took aim at the CCP’s pernicious behavior, including encouraging and enforcing censorship and self-censorship by Hollywood and other foreigners, labor camp torture and persecution, forced organ harvesting of prisoners of conscience, and corrupt business practices in China. The episode was lauded by China watchers and human rights activists for its veracity. The CCP regime subsequently completely censored and purged South Park from the Chinese internet.

On Oct. 4, Daryl Morey, the general manager of the NBA team Houston Rockets, tweeted a picture with the words, “Fight for Freedom. Stand with Hong Kong,” a reference to the over four-month-long anti-extradition bill mass protests in Hong Kong. Although Morey later deleted his tweet, it sparked a huge response in mainland China—Chinese companies withdrew their sponsorship; the Chinese Basketball Association suspended its ties with the Rockets; the Rockets’ pre-season games in China were canceled; state broadcaster China Central Television announced that it was dropping two NBA games scheduled this week and “immediately investigate all cooperation and exchanges involving the NBA”; and Morey and the Houston Rockets were heavily criticized on Chinese social media.

On Oct. 6, Morey tweeted that he did not “intend my tweet to cause any offense to Rockets fans and friends of mine in China, and that he was “merely voicing one thought, based on one interpretation, of one complicated event.” Meanwhile, the NBA’s responded with a statement that began, “We recognize that the views expressed by Houston Rockets General Manager Daryl Morey have deeply offended many of our friends and fans in China, which is regrettable.” Neither statement from the NBA or Morey were apologies. According to an Associated Press report, however, the NBA posted a statement on its Weibo account on Oct. 7 which stated the league was “extremely disappointed” by Morey’s “inappropriate comment” and that his view “severely hurt the feelings of Chinese fans.” NBA spokesman Mike Bass said that there “should be no discrepancy” between the Chinese and English statements, and that “our statement in English is the league’s official statement.” Also on Oct. 7, Rockets guard James Harden said with regard to Morey’s tweet, “We apologize. We love China. We love playing there.”

Chinese state and Party media blasted Daryl Morey and the NBA. Morey had “broken the bottom line,” blared headlines a People’s Daily headline. Global Times, a nationalistic tabloid, mocked those who defended Morey as exercising his freedom of speech as an American while criticizing the CCP government in a commentary with the headline, “Rockets and Chinese fans have their own freedoms.” Meanwhile, “Changan Sword,” the official social media account of Central Political and Legal Affairs Commission, accused the Rockets of “counting China’s money while scolding China.” Finally, Xinhua News Agency reported a short piece about the Chinese Basketball Association’s “strong dissatisfaction” with Daryl Morey’s statement.

On Oct. 6, Joe Tsai, the CEO of Alibaba and co-owner of the NBA team Brooklyn Nets, posted a lengthy “open letter to all NBA fans” on Facebook where he repeated often trotted out CCP talking points in slamming Daryl Morey for supporting Hong Kong. “Supporting a separatist movement in a Chinese territory is one of those third-rail issues, not only for the Chinese government, but also for all citizens in China,” he wrote. Tsai added, “The one thing that is terribly misunderstood, and often ignored, by the western press and those critical of China is that 1.4 billion Chinese citizens stand united when it comes to the territorial integrity of China and the country’s sovereignty over her homeland. This issue is non-negotiable.”

Several American media outlets, China watchers, and commentators across the ideological spectrum criticized the CCP government for its censorship and heavily-handedness in dealing with Daryl Morey, the Houston Rockets, and the NBA. They also criticized Joe Tsai for his commentary on the issue.

Our take:
1. It is one thing for the U.S. government, the think-tanks, and the media to warn about CCP influence operations, censorship, and political warfare. It is another thing for a popular animated sitcom to call attention to the same topics in a humorous yet accurate manner. Likewise, millions of NBA fans are now aware that the league and its players, who are not afraid to express critical views of U.S. politics and the American government as well as speak up about oppression, are practicing self-censorship and apologizing instead of censuring the CCP government, media, and Chinese companies for trying to restrict free expression.

Within the span of a week, art imitated life and life imitated art. We believe that South Park and the NBA’s run-in with the CCP regime would awaken the American public to the CCP’s ideological threat and eventually lead to growing support in the grassroots for a “Cold War”-style confrontation with communist China.

2. Daryl Morey’s Hong Kong tweet and the NBA’s defense of him have roused nationalistic sentiments in mainland China. Nationalism, however, is something that the CCP might not necessarily benefit from in this sensitive period of trade negotiations with the United States and mass protests in Hong Kong. Indeed, the CCP cannot guarantee that anti-American street protests will not suddenly transform into anti-CCP protests depending on how the situation in Hong Kong and with the U.S. develops.

3. Based on our long-term study of the CCP, we believe that the early Chinese response to Daryl Morey’s tweet and the NBA does not necessarily reflect Beijing’s will.

The CCP will likely revise the current NBA propaganda strategy. A revision could come when Chinese nationalism and the fear of being locked out of China’s markets fail to frighten the U.S. and instead provokes strong anti-CCP sentiment in the West; or the situation in Hong Kong becomes very unstable; or Sino-U.S. trade negotiations are in danger of breaking down completely; or any combination of the three and other reasons. To downplay the NBA “controversy,” the CCP propaganda organs could wind down or cease criticism of Daryl Morey and the NBA, and even find ways to criticize those in the mainland for being “too nationalistic” and overly sensitive about the issue. Such a shift in propaganda strategy, however, has dangerous downsides for the CCP—the Chinese people will see that the CCP is a paper tiger and the double-edged sword of nationalism could cut towards the CCP.

4. As the situation in Hong Kong becomes more unstable and with Sino-U.S. trade negotiations becoming more complicated and confusing, the CCP will likely try to simultaneously retain the goodwill of foreign businesses and governments and coerce them into siding with the CCP regime over America. To achieve that effect, the CCP could stress and repeat the following narratives and see that they are amplified by its Red Matrix:

The CCP’s propaganda narratives, however, will become less and less effective with increased and additional U.S. tariffs, and as more companies exit the China market.

Get smart:
The “China controversy” over South Park and the NBA clearly illustrates the sort of political risk that businesses, investors, and governments face in dealing with the Chinese communist regime.

Businesses, investors, and governments must account for the ideological turn in Sino-U.S. relations to sidestep risks and discover hidden opportunities in a time of increasing geopolitical uncertainty.