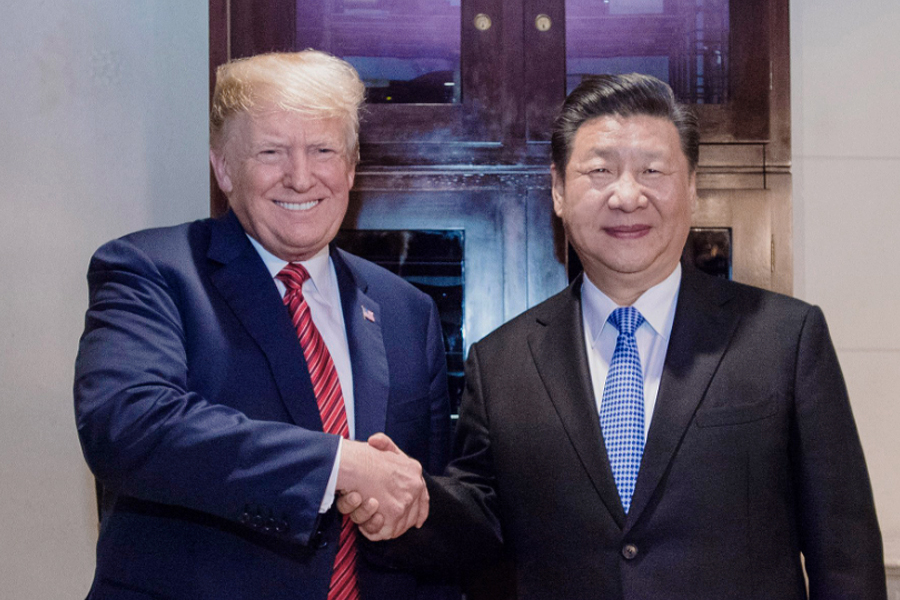 ◎ Xi was likely seeking a pause going into the G20. The concessions which he made to gain the pause suggests a “pyrrhic victory.”

The United States and the People’s Republic of China agreed to pause the escalation of the trade war after a “highly successful” meeting between President Donald Trump and Chinese leader Xi Jinping at the G20 meeting in Argentina.

Both sides issued statements shortly after Trump and Xi held an over two-hour-long dinner session in the evening of Dec. 1. The U.S. statement offered fuller details of what the pause entailed while the PRC statement left out certain facts to make the agreement read more favorably to China. Per both statements:

PRC state media reporting of the Trump-Xi meeting was relatively neutral in tone. Xinhua said that both sides had reached an “important consensus” and agreed to “expand cooperation based on reciprocity and mutual benefit and manage differences based on mutual respect.”

However, Xinhua, People’s Daily, chinanews.com, and other mainland Chinese news sites republished on their homepage a “self-media” commentator’s piece on the Trump-Xi meeting which boasted that China, who was supposedly unafraid of battle, had compelled America to compromise at the G20. “America’s attack was akin to boxing, aggressively ratcheting up” trade pressure, the commentator wrote. But “China was doing Taiji, using softness to trump hard.”

Flying back from Argentina on board Air Force One, President Trump told reporters that his agreement with Xi was an “incredible deal.” He said, “certainly, if it happens, it goes down as one of the largest deals ever made.”

Michael Pillsbury, the author of “The Hundred-Year Marathon” and director of Chinese strategy at the Hudson Institute, told Bloomberg that “neither side got their maximum demands and it’s not the first time in U.S.-China relations that both sides claim victory. Both sides avoided the worst-case scenario.”

Our take:
Before the G20, we assessed that “Trump and Xi will unlikely reach a substantial trade agreement at the G20.” This has been confirmed with the U.S. announcing a 90-day pause in the escalation of the trade war to allow both sides to negotiate a deal.

We also noted that for Xi, “dissuading Trump from escalating the trade war is likely his main goal at their G20 meeting.” And back in October, we noted that “Xi will be very fortunate if America decides to escalate the trade war at a slower pace (such as delaying the rise of tariff rate from 10 percent to 25 percent on $200 billion worth of Chinese imports).” Xi managed this at the dining table, but details of the agreement from the U.S. side indicates that he leaves Argentina with a “pyrrhic victory.”

Meanwhile, Trump and the U.S. seem to have come out ahead with a pause in the escalation of trade tariffs, at least based on what is publicly known thus far.

Below is our preliminary take on the G20 outcome.

Xi and the PRC
Beijing has been consistent in presenting an uncompromising posture in the lead up to the G20, and Washington has been equally adamant in its demands. One party definitely blinked in Argentina, and going by the details listed in the U.S. post-dinner statement, that party was Xi and the PRC.

1. The deteriorating situation on the mainland very likely forced Xi Jinping to compromise at the G20 to lower political risks for the regime.

A worsening economy, plunging stock markets, rising business failure and unemployment, growing social tensions, a food crisis, and the recent spread of African swine fever are each very severe problems for any government to handle. These problems are now all occurring simultaneously in the PRC.

2. Of all domestic problems, collapse in market confidence is likely the most pressing issue for the CCP, which has tied its political legitimacy to economic and financial performance. Already, the Shanghai Composite Index has fallen below 2,500 points, a level not even breached during the 2015 stock crash.

If Xi cannot even secure a pause in the escalation of the trade war, China’s markets are likely to plummet faster. And given the financial set up in China, a huge market drop could trigger a system-wide financial crisis, further worsening the economy and severely threatening the CCP’s political legitimacy.

3. There are also pressing external issues forcing Xi to compromise at the G20, such as losing face at prominent international events. For instance, the PRC loss face at the APEC summit in November when APEC leaders declined to issue a joint statement, the first time in the summit’s 25 year history. The PRC also gained notoriety for exhibiting thuggish behavior towards host Papua New Guinea.

Another loss of face at the G20 summit could prove politically disastrous for Xi and the PRC at home. Domestic markets also tend to react negatively to poor showings by the PRC overseas.

4. Growing U.S. pressure in spheres other than trade is likely the top external factor shaping Xi’s decision to make concessions in Argentina. For example, America is clamping down on exporting much-needed technology to the PRC and convincing its allies to stop using Huawei 5G equipment. Further, the U.S. has stepped up freedom of navigation operations in the South China Sea despite PRC complaints.

The shift in U.S. policy on China from engagement to competition has also created a geopolitical environment that is increasingly wary of CCP influence and interference, and more willing to stand up to PRC bullying.

Trump and the US
1. Chinese Communist Party propagandists may have hinted that the Sino-U.S. agreement at the G20 was a “compromise” on Trump’s part, but Trump barely gave up any leverage with a 90-day pause in the escalation of the trade conflict.

First, existing U.S. and Chinese tariffs are still in effect during the 90-day period, not put on hold as in an actual ceasefire. If anything, the PRC is a big loser of the G20 agreement for having agreed to immediately purchase a “very substantial” amount of agricultural products from America (China has a 25 percent tariff on U.S. soybeans), as well as other “Made in USA” goods (some of which may be subjected to tariffs).

Second, Trump has shown with North Korea this year that he can call off scheduled negotiations when he feels that the other party is not being serious. Put another way, Trump will be as good as his word so long as the Chinese Communist Party is trying to make a genuine effort towards making a concrete deal and shows good behavior during the process.

Third, Trump ordered Section 301 investigations in 2017 after a 100-day action plan for trade talks failed to deliver results. The CCP may have only bought 90 days of non-escalation if again fails to meet U.S. expectations.

2. Trump’s opponents (the Democrats, Never Trumpers, scholars, media, etc.) may be inclined to attack him for agreeing to pause escalating the trade war with the PRC. Unless Trump caves after 90 days and ends the trade war, however, such attacks are unlikely to be meaningful in the long run.

3. American farmers and energy producers could emerge as big winners of the Sino-U.S. G20 deal.

China is likely suffering from a food crisis (see our August analysis) and has urgent need to purchase American agricultural products. China’s food crisis should have worsened in recent weeks with the spread of African swine flu on the mainland.

Meanwhile, Beijing’s push to move the country away from coal-powered heating to natural gas starting in 2017 has resulted in increased demands for LNG.

Americans who benefit from China’s “very substantial” purchases of U.S. products could end up boosting Trump’s re-election bid in 2020.

4. Trump will score political points with Americans affected by or worried about the drug crisis in the country if Xi can deliver on his promise to harshly punish Chinese drug dealers who export Fentanyl to the United States.

5. The U.S. may be able to expect better cooperation from the PRC on denuclearizing North Korea while trade negotiations are ongoing.

6. By meeting Xi Jinping “halfway” with a pause, Trump has granted Xi some time and sufficient “face” to push through reforms in China. This is in line with the principled realism espoused in Trump’s National Security Strategy.

Should Xi succeed in meeting Washington’s tough asks (trade, intellectual property, cyber, etc.), the resulting deal will be a true “win-win” for both parties. Should Xi fail, he cannot claim that Trump never gave him a second chance to live up to his pledge of carrying out true reform and opening up.

7. Encouraged by fresh Sino-U.S. negotiations, the so-called “Goldman Sachs faction” may relax their pressure on Trump.

In the lead up to the G20, White House trade advisor Peter Navarro accused current and former Wall Street executives of acting as “unregistered foreign agents” in carrying out a “full court press” against the Trump administration on behalf of the PRC. “Bring your Goldman Sachs money to Dayton, Ohio and invest in America. The president of the United States does not need shuttle diplomacy,” he said.

Michael Pillsbury coined the term “Goldman Sachs faction” during an interview with Fox News to describe Wall Street executives who appear to be playing middlemen for the PRC.

8. The 90-day pause gives the Trump administration additional time to finalize a China strategy for when trade negotiations fail and the U.S. enters all-out competition with the PRC.

Timing wise, President Trump is due to submit a report to Congress containing a whole-of-government strategy with respect to the PRC by March 1, 2019, per the 2019 National Defense Authorization Act.

What’s next:
1. We noted earlier that Xi Jinping will not be able to meet the Trump administration’s trade demands due to political and institutional factors. Because it is highly unlikely that Xi can overcome those factors in a short period, we do not expect the latest round of Sino-U.S. trade talks to bear fruit after 90 days. Xi and Trump may have merely delayed a full-blown trade war at the G20.

2. Xi’s political rivals and various CCP interest groups will almost certainly be affected by his efforts to reform and open up the regime. Hence, they will undermine Xi and find ways to prevent the Sino-U.S. trade negotiations from succeeding. If Xi fails, his rivals have an excuse to pressure him to revert to a “collective leadership” model or put restrictions on his power.

In the highly unlikely event that Xi does meet all of Washington’s asks by the 90-day mark, his rivals will likely escalate the CCP factional struggle to a point where the regime is endangered.

3. A favorite crisis management tactic of the CCP is trading space for time. The CCP will likely step up external influence operations during the 90-day negotiation period.

As a broad strategy, the CCP could use its propaganda apparatus and the Red Matrix to advance the idea of “win-win” consensus and pressure the White House into prolonging negotiations past the 90-day mark.

4. We wrote previously that the U.S. will likely continue to pressure the PRC after the G20 “even if Xi manages to convince Trump to grant him a face-saving reprieve so that he can return to China to accelerate reforms.” Pressure could come in the form of calling out the CCP’s human rights abuses, cybersecurity issues, or espionage.

5. In a more optimistic scenario for Sino-U.S. relations, Xi Jinping manages a decisive victory in the factional struggle during the 90-day window and is thus able to implement the concrete reforms that would lead to a trade deal with the United States. To come out ahead in the struggle, Xi will have to strongly suppress political foes and convince the officialdom to follow his lead instead of engaging in the sort of “passive resistance” seen over the past 6 years. Given that China’s economic, social, food, and other problems have reached crisis point, Chinese officials may be willing to “bite down on bone” and fully cooperate with Xi’s reform drive. (For more on the issue of Xi and reform, read “Why Xi Jinping Removed China’s Presidential Term Limit”)