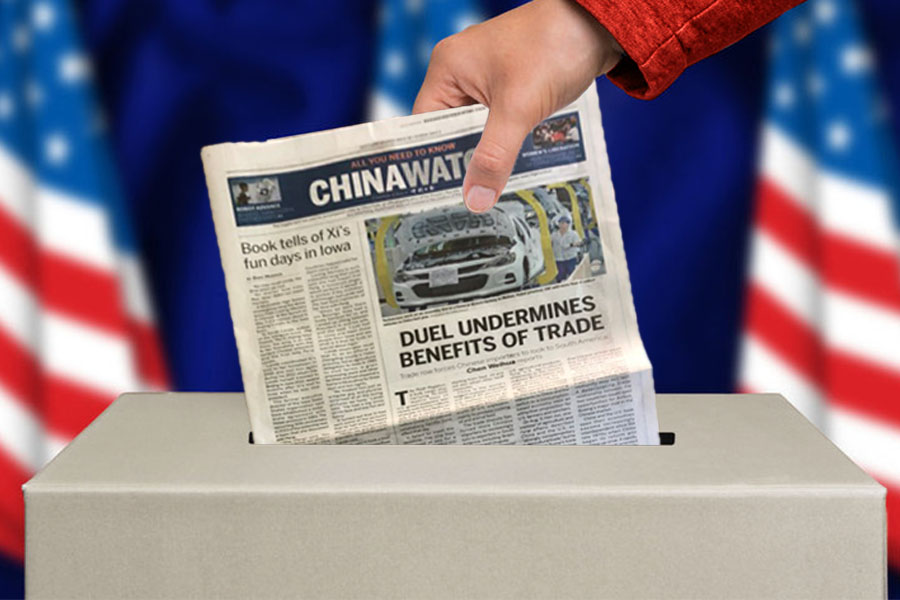 Geopolitics Watch: How the CCP Can Interfere in US Elections

◎ We believe that Trump and his administration have identified a very real threat to the upcoming U.S. midterm elections.

United States President Donald Trump accused China of trying to meddle in the upcoming U.S. midterm elections in his opening remarks at the 2018 United Nations Security Council session on Sept. 26.

“Regrettably, we’ve found that China has been attempting to interfere in our upcoming 2018 election coming up in November against my administration. They do not want me—or us—to win because I am the first president ever to challenge China on trade,” he said.

Trump later tweeted: “China is actually placing propaganda ads in the Des Moines Register and other papers, made to look like news. That’s because we are beating them on Trade, opening markets, and the farmers will make a fortune when this is over!”

Trump shared on his Twitter account photos of the Sept. 23 edition of China Watch found in Des Moines Register, a local newspaper in Iowa. That particular edition ran articles critical of Trump and the Sino-U.S. trade war. China Watch, a supplement produced by the state-run China Daily, is also carried by major U.S. newspapers like the Wall Street Journal and the Washington Post, as well as in prominent newspapers in other English-speaking countries.

On Sept. 18, Trump tweeted: “China has openly stated that they are actively trying to affect and change our election by attacking our farmers, ranchers and industrial workers because of their loyalty to me.” Chinese $60 billion worth of tariffs include farm products, and look to have the largest impact on U.S. counties that voted for Trump in 2016

In the lead up to Trump’s statement at the UN, senior officials in the Trump administration had been warning about election meddling by China:

Our take:
Based on our understanding of the Chinese Communist Party (CCP) and its operations, we believe that President Trump and his administration have identified a very real threat to the upcoming U.S. midterm elections. For Trump to denounce the CCP’s effort to undermine U.S. elections at the UN Security Council meeting is very revealing of the severity of the issue and suggests that the Trump administration is taking this threat very seriously.

Indeed, running propaganda ads in American newspapers is very likely only the tip of the iceberg of the CCP’s overseas subversion capabilities.

For decades, the CCP has been advancing its Great External Propaganda Plan (GEPP) to shape the world’s perception of China. While chiefly aimed at buttressing domestic propaganda, the GEPP has succeeded overseas in promoting a rosy image of the Chinese regime while downplaying its abuses, pernicious behavior, and expansionism. GEPP messaging also includes false narratives which are designed to make countries or people side with China over the U.S., as well as other forms of disinformation. Western mainstream media outlets, academic institutions, and think-tanks, particularly those that receive funding from the Chinese regime, are known to produce content containing GEPP messaging with a range of subtlety. The CCP would almost certainly be tapping its GEPP to mobilize seemingly non-PRC assets to interfere in the 2018 U.S. midterm elections.

In recent years, political, business, and intellectual elites in Australia and New Zealand were found to have been targeted by the CCP for influence activities, and very successfully so in some instances. Elected officials in both countries, for example, have been outed for openly promoting the Party line on key global issues. The CCP’s successful subversion of Australian and New Zealand democracies raises questions about what it might have accomplished in America.

One news item this August offers a glimpse of CCP infiltration of U.S. democracy. Several U.S. news outlets reported that U.S. Senator Dianne Feinstein (D-Calif.), a member of the Senate Select Committee on Intelligence, had a former staffer who was reporting back to China’s Ministry of State Security. The staffer had worked for Sen. Feinstein for nearly 20 years. According to The Federalist, Feinstein and her family appear to have a lucrative and decades-long friendship with former CCP leader Jiang Zemin while she supported “greater ties with China while taking a relatively dovish and strictly apologist line on its human rights atrocities.”

How the CCP can interfere in US elections
Here are some possible ways in which the CCP might try to sway the U.S. midterm election in November:

What the U.S. can do to counter CCP interference
CCP infiltration and interference in U.S. democracy and society is severe, but there are effective countermeasures which the Trump administration can take:

Get smart:
Knowledge of China or the language is helpful in sieving out CCP propaganda messaging and interference tactics. But without an in-depth understanding of CCP elite politics or CCP political culture, separating the weeds from the chaff can be very trying. Clumsy counter propaganda moves can leave additional openings for the CCP to exploit.

SinoInsider is completely independent and free from Chinese government influence. Better yet, we have a proven track record of correctly predicting developments in China’s politics and geopolitics because our experts have a deep understanding of CCP elite politics and culture. For more on identifying and countering CCP propaganda and interference activities, contact us.

The CCP is Hijacking the ‘New Cold War’ Narrative