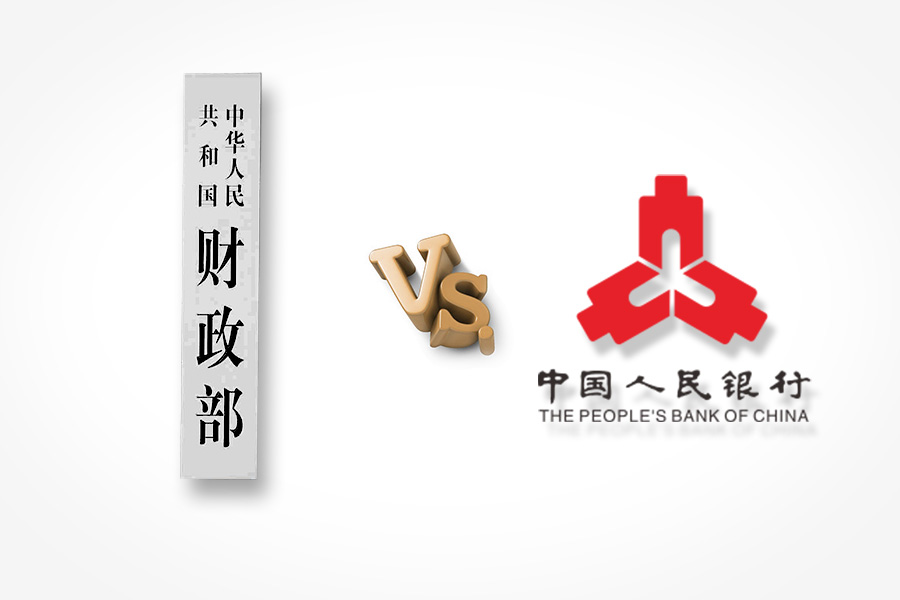 ◎ The exchange between the finance ministry and central bank exposes deeply-rooted institutional problems in the Chinese regime.

In an article published on July 13, Xu Zhong, the head of research for the People’s Bank of China (PBoC), criticized China’s Ministry of Finance (MoF) for failing to actively implement fiscal policy to stimulate growth and for “playing the gangster.” On June 30, the Chinese Communist Party (CCP) had published a guiding opinion that placed the management of all state-owned capital under the MoF.

On July 16, an official from the finance ministry disputed Xu’s claims in an essay published under a pen name.

The exchange between the PBoC and MoF garnered much attention because it is virtually unheard of for government agencies in China to publicly air their disagreements.

We believe that the exchange exposes deeply-rooted institutional problems in the Chinese regime.

The key takeaways from Xu Zhong’s curt critique of the MoF:
1. The MoF’s fiscal policy is not active enough, lacks fiscal transparency, and has inadequate public supervision. “National People’s Congress delegates can’t comprehend the MoF financial statements, and neither can I,” Xu wrote.

2. The Chinese government’s tax reduction policies would result in “tax reductions for large and medium-sized state-owned enterprises, but tax increases for small and micro enterprises.” Meanwhile, government revenue is “growing at a higher rate” during a period when Beijing is demanding that enterprises, the financial sector, and households undergo deleveraging. Also, the MoF seems to reluctant to increase the deficit to stimulate the economy.

3. Given that the MoF is the central authority responsible for managing the assets of the various state-owned financial institutions and investors, then it has to dole out “real gold and silver” and not make “fake capital injections” and “play sleight of hand tricks” with the said institutions and investors. Xu also criticizes the MoF for “sending ‘grannies’ to the state-owned financial institutions” (“granny” is a substitute word for “supervisor”; Xu is mocking the MoF) instead of improving the professionalism of corporate governance.

2. The rebuttal notes that Xu Zhong’s point about “fake capital injections” is “very unprofessional,” and that it is meaningless to suspect the MoF of not actually distributing funding when it is “not so poor as to start issuing IOUs.”

4. The rebuttal argues that “given the national sentiment and political realities, and especially in the context of guarding against major risks,” some local governments are “intentionally” obscuring their debt out of “political grading and risk benchmark considerations.” These local governments are not “intentionally delaying paying off their bills and waiting to default.”

5. The rebuttal asserts that the PBoC ought to be “independent and authoritative” and that the MoF and PBoC should manage their respective portfolios—a roundabout way of telling the PBoC to mind its own business.

The big picture:
The squabble between the PBoC and the MoF comes as deeper problems are developing in the Chinese economy at the onset of a Sino-U.S. trade war. The financial troubles of local governments have been surfacing nonstop in the first half of 2018, and some local governments have already defaulted on payments.

Our take:
1. The implicit debt of local governments is very large, and a debt crisis could be triggered at any moment. The PBoC and MoF seem to be well aware of this, and the recent exchange between Xu Zhong and the anonymous MoF official reflects a desire on both sides to shift the blame for a looming financial crisis. The exchange also inadvertently exposes the fact that China’s financial woes stem from the CCP regime’s institutional deficiencies.

2. We have mentioned in previous articles that China’s current financial predicament is the result of the policies and corruption of the Jiang Zemin era (1989-2012) and the characteristics of CCP authoritarian rule. Xi Jinping inherited a Chinese economy that was in shambles when he took office in 2012, and the situation got worse due to resistance from the Jiang faction. The Jiang faction long controlled key financial nodes in China, and its associates triggered the 2015 China financial crisis as a way to undermine Xi’s rule.

Based on our research, we observed that Xi carried out virtually no economic reform in his first term because he was focused on consolidating power. In his second term, Xi centralized authority to a high degree, appointed allies to key positions, and launched a deleveraging campaign to tackle China’s economic woes. However, he was not able to push through reform quickly enough to convince United States President Donald Trump not to start a trade war against China. Trump’s tariffs have thus far caused the CCP propaganda apparatus to lose control over the narrative and punctured the CCP’s illusion of an economically prosperous China.

3. In our analysis of the PBoC personnel reshuffle, we noted that the incumbent central bank president Yi Gang was not the ideal candidate for the post.

Meanwhile, the MoF’s leadership ranks have been reshuffled at least once in the period between Xi taking office and the Two Sessions this year. Now relatively younger officials with prior experience in the state banks, banking regulator, and discipline inspection commission staff the upper echelons of the MoF.

4. From the establishment of the Financial Stability and Development Committee (sub-national level) to the appointment of Guo Shuqing as PBoC Party secretary, it appears that that the central bank’s authority has been significantly weakened.

Beijing’s move to have the MoF manage all state-owned financial capital instead of dividing up responsibilities between the PBoC, the State-owned Assets Supervision and Administration Commission, the National Development and Reform Commission, and local governments as per the previous model naturally engenders opposition from PBoC officials. PBoC opposition is also understandable given that China’s financial system now has to shoulder the burden of local government debt risks.