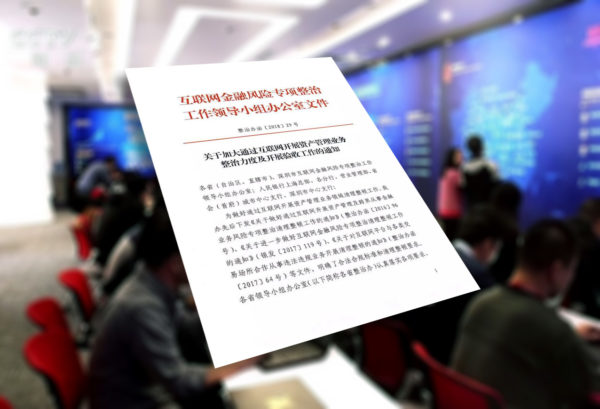 ◎ Beijing is likely very clear that a trade war is unavoidable, and it can only seek to delay its start and find ways to lessen the blow.

The Chinese Communist Party’s Leading Group of Internet Financial Risks Remediation issued a memo on March 28 regarding the sale of asset management products (AMP) on the internet.

Key points from the memo include:

1. Firms that issue and sell AMPs online are required to obtain an AMP business or agent license from the central financial management authorities.

2. Dealing in various AMPs over the internet without permission from the authorities may be constituted as illegal fund-raising, absorbing public deposits, and issuance of securities.

3. Businesses or agents involved in issuing or selling AMPs online must cease operations by the end of June if they are without a license.

The backdrop:
1. Lou Jiwei, China’s former finance minister and chairman of the National Social Security Fund Council, said in January that China’s financial sector is in a “messy” state and faces risks even worse than the United States before the 2008 crash. He also noted that many mainland internet financial firms are “quasi-financial frauds.”

2. At the first meeting of the Central Financial and Economic Affairs Commission on April 2, Xi Jinping said that cleaning up financial issues that “may threaten economic and social stability and trigger systemic risks” is a priority.

The big picture:
The Trump administration’s tariffs on Chinese imports which was announced near the end of March will only come into effect 60 days later when the tariff list has undergone public consultation.

Our take:
In 2017, Beijing launched a deleveraging and de-risking campaign to rectify China’s financial chaos. The deleveraging served to clean up corruption in the financial sector and to avoid a debt crisis in the event of a Sino-U.S. trade war.

Beijing is likely very clear that a trade war is unavoidable, and it can only seek to delay its start and find ways to lessen the blow. However, the central authorities have limited time to fix the risks.

Should Xi Jinping find a way to effectively contribute to the denuclearization of the Korean Peninsula in a manner that is satisfactory to the United States, he could gain a bargaining chip to ease the impact of the Sino-U.S. trade war.