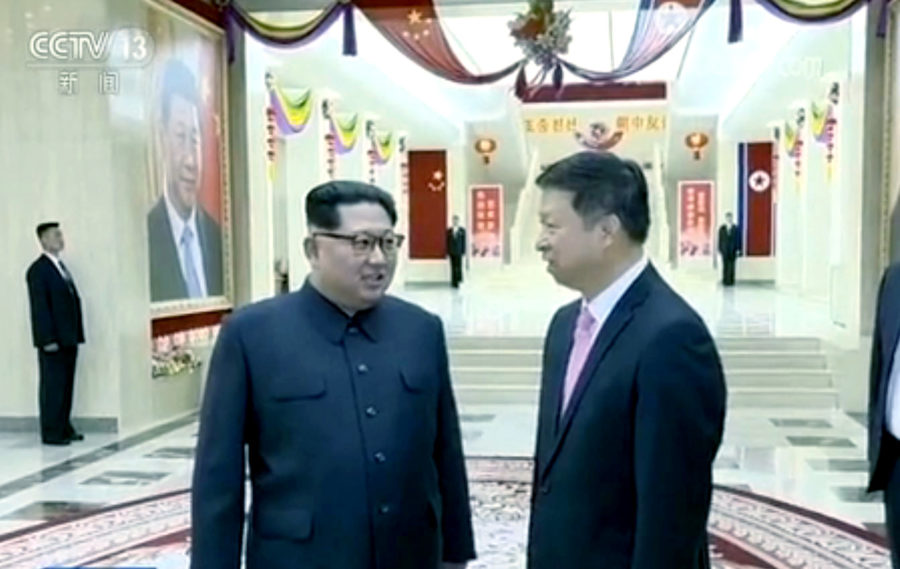 ◎ The warm reception that Song Tao and the Chinese delegation recently enjoyed contrasts sharply with Song’s visit to North Korea in November 2017.

At the airport, Song was received by Kim Yo Jong, Kim Jong Un’s sister and an alternate member of the Politburo, and Politburo member Ri Su Yong, according to images from North Korean state media. Chinese state television showed Kim Jong Un embracing Song in a big banquet hall. A big picture of Xi Jinping and Kim shaking hands during their meeting in Beijing was on display, while another shot from state media revealed a screen with a large picture of Xi.

The Chinese delegation was treated to a banquet. According to North Korean state media, Kim Jong Un said with “deep emotion that the Chinese comrades accorded cordial hospitality to him with utmost sincerity in token of warm comradely friendship during his recent unforgettable visit to China,” and he was giving the Chinese delegation “the highest level” of treatment as a “close friend” of Xi Jinping. Kim and Song also held talks where they exchanged views about the “international situation” and the “common interests” of both regimes.

The backdrop:
The warm reception that Song Tao and the Chinese delegation recently enjoyed contrasts sharply with Song’s visit to North Korea last November. During his four days in Pyongyang, Song failed to meet with Kim Jong Un. Both North Korean and Chinese state media gave muted coverage to his trip.

Since Song’s November trip, both China and the United States have been enforcing the strictest ever United Nations sanctions on North Korea. In March, Kim Jong Un sought and got a meeting with President Donald Trump, and later made a secret visit to Beijing, his first official diplomat trip since taking office.

U.S. and North Korean officials are presently finalizing the agenda and details of the Trump-Kim summit. According to South Korean media, the Trump administration wants North Korea to denuclearize within six months to a year as opposed to the “phased and simultaneous denuclearization” which Pyongyang proposed. Meanwhile, North Korea wants the U.S. to remove its nuclear and strategic assets from the Korean Peninsula, provide assurance that North Korea wouldn’t be attacked, and turn the armistice agreement into a peace treaty and normalize diplomatic arrangements.

On April 15, Chinese foreign minister Wang Yi met his Japanese counterpart Taro Kono in Tokyo. The summit was the first high-profile bilateral meeting the two countries in nearly a decade. One of the issues Wang and Kono discussed was the denuclearization of North Korea. On the same day, Japan’s Kyodo News reported that Trump and Japanese prime minister Shinzo Abe would agree to demand “complete, verifiable and irreversible denuclearization” of North Korea during their upcoming meeting in Florida.

Our take:
We have been writing that the Xi-Kim summit forebodes peace on the Korean Peninsula and a gradual opening up of North Korea. Song Tao’s most recent trip offers further signs of this progress.

1) The difference in how Song Tao was received in Pyongyang in April versus November 2017 shows that Kim Jong Un has decided to be supportive of the Xi administration instead of Xi’s political rivals. The Kim family has warm ties with the Jiang Zemin faction, an association which likely threw the relationship between Xi and Kim into deep freeze for the entire duration of Xi’s first term in office. Xi spent most of those five years purging Jiang faction loyalists and consolidating his control over the Chinese regime.

After the personnel reshuffles at the 19th Party Congress and the Two Sessions, the Jiang faction has been noticeably weakened. Further, Xi has more fully consolidated power by adding his political theory (“Xi Jinping Thought”) to the constitution and Party Charter, and signaled that he wouldn’t be a lame duck leader by dropping the presidential term limits.

Factional struggles play an outsized role in the affairs of elite CCP politics. Kim must have observed the transition of power in the Chinese regime, and decided that it was more prudent to cast his weight behind Xi in the face of throttling economic sanctions and the threat of U.S. military attack. In other words, aligning himself with the Xi camp is the best option for Kim to preserve his rule and avoid the economic and military pitfalls that come with continued sanctions.

2) Kim will likely cooperate with denuclearization after seeing the resolve of the Trump administration. Trump has persisted with his “maximum pressure” strategy against North Korea, and has shown with timely attacks on Syria that he will use the military option if strongmen cross the red line. Also, the Trump administration’s cautious approach to trade talks with China demonstrates that Trump is concerned chiefly with actions and results, and not merely words and promises.

3) For Xi Jinping, pushing Kim towards denuclearization and peace on the Korean Peninsula is his only option to stall a trade war with America. China cannot withstand a trade war with the U.S. in light of its pressing economic, social, and political problems, and Xi needs to buy as much time as he can to deleverage and de-risk the financial sector. Should Kim fail to reach a reasonable denuclearization deal with Trump, Trump would likely push both North Korea and China harder on the economic front, a move which imperils both regimes.