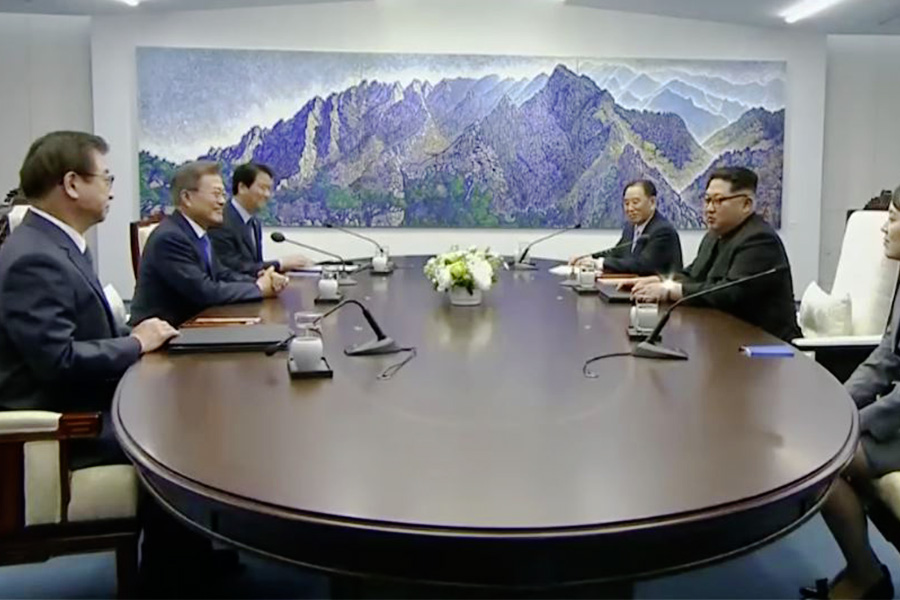 ◎ Kim’s willingness to make the closure of the Punggyeri test site public and the scrapping of “Pyongyang time” are signs that he is sincere about denuclearization.

More details of the Korean Peninsula peace and denuclearization process have emerged since the inter-Korean summit on April 27.

On April 29, South Korean officials said that North Korean leader Kim Jong Un revealed at the inter-Korean meeting plans to make his previously announced closure of North Korea’s nuclear test site open to the international community. Kim would invite experts and journalists from the United States and South Korea to witness the dismantling of the facilities. “There is no reason for us to possess nuclear weapons while suffering difficulties if mutual trust with the United States is built through frequent meetings from now on, and an end to the war and non-aggression are promised,” Kim had said. The closure of the Punggyeri test site is scheduled for May.

Kim also plans to do away with “Pyongyang time” (30 minutes behind South Korean time) established in 2015 and sync North Korea’s clocks with Seoul’s.

In an interview with ABC aired on April 29, Secretary of State Mike Pompeo said that there was a “real opportunity” to denuclearize North Korea. “We have built a coalition – a diplomatic coalition has come together to put pressure on Kim Jong Un. President Trump and that pressure campaign are the reasons Kim Jong Un wants this meeting,” he said. Pompeo added that the United States is looking at Pyongyang’s “actions and deeds,” and “until such time, the president has made it incredibly clear we will keep the pressure campaign in place until we achieve that.”

On April 28, President Donald Trump said at a rally in Michigan that he expects to meet Kim Jong Un in the next three or four weeks.

The backdrop:
1. In early March, Kim sought a meeting with Trump, and Trump agreed to a summit. About six months ago, the United Nations announced its strictest ever sanctions on North Korea. Chinese official data in the first quarter of 2018 revealed that the Chinese regime was imposing energy sanctions (oil, coal, fuel) on North Korea that were even more stringent than those mandated by the U.N.

2. From March 25 to March 28, Kim held a secret meeting with Xi Jinping in Beijing. At the meeting, Kim pledged to denuclearize the Korean Peninsula. Days later, over 150 South Korean artists, including K-pop groups, held performances in Pyongyang.

3. On April 19, South Korean president Moon Jae-in announced that North Korea has expressed its desire for “complete denuclearization” of the Korean Peninsula and would not be seeking the withdrawal of U.S. troops from the peninsula as a condition for denuclearization. Moon said that North Korea was looking for an “end of hostile policies” and a “guarantee of security” from America.

5. On April 24, Trump said that the North Koreans want the summit between him and Kim to take place “as soon as possible.” He said that this development is “a great thing for the world.”

6. At the inter-Korean summit on April 27, Kim and Moon met at the demilitarized zone and signed a joint declaration of “peace, prosperity and unification” of the Korean Peninsula. The declaration noted that both Koreas have a “common goal of realizing, through complete denuclearization, a nuclear-free Korean Peninsula.”

Our take:
1. Kim’s willingness to make the closure of the Punggyeri test site public and the scrapping of “Pyongyang time” are signs that he is sincere about denuclearization. And Kim’s sincerity suggests that the sanctions and Trump’s “maximum pressure” campaign have taken its toll on North Korea and seriously threatens the survivability of the Kim regime. The North Korean economy could be in dire straits, and Kim has no bargaining chip to use in negotiations with Washington and Beijing to preserve his regime save complete denuclearization.

2. Trump announcing an early summit with Kim is another sign that the North Koreans are very anxious about ending their current predicament. The Trump administration has repeatedly said that they are looking at actions and not words when it comes to North Korea’s denuclearization, and Trump has said that he would walk away from the table if negotiations are not favorable to that outcome. Expect Kim to accede to U.S. demands and demonstrate more signs of his willingness to completely denuclearize in coming weeks.

3. South Korean and U.S. media report that either Mongolia or Singapore could be the venue for the coming Trump-Kim summit, with Singapore being America’s preference. Given the strength of U.S-Singapore relations and Singapore’s trade relations with North Korea (seventh largest trading partner before Singapore suspended commercial ties as part of U.N. sanctions), the island-state seems the likelier venue of the two for the meeting between Kim and Trump.

If Kim views his security as paramount and the U.S. is willing to accommodate him, however, then Mongolia could be the summit site because it is accessible by train. The Kim family has never favored air travel out of fear of assassination.

4. The date of the inter-Korean summit was likely chosen for symbolic effect. Should the peace process maintain its present trajectory, we are anticipating the signing of a peace treaty on July 27, the 65th anniversary of the Korean War armistice. By that date, North Korea should have taken significant verifiable and irreversible steps to denuclearize. Complete denuclearization could be achieved by the end of 2018.

5. SinoInsider has been predicting coming peace to the Korean Peninsula since news that Kim Jong Un was in Beijing broke on March 26. Our prediction was derived from analyzing the North Korean situation from the perspective of the interests of North Korea, the U.S., and China. We believe that changes in Chinese Communist Party elite politics over the past half a year and U.S. “maximum pressure” are particularly critical in de-escalating the North Korean crisis and accelerating the peace process.