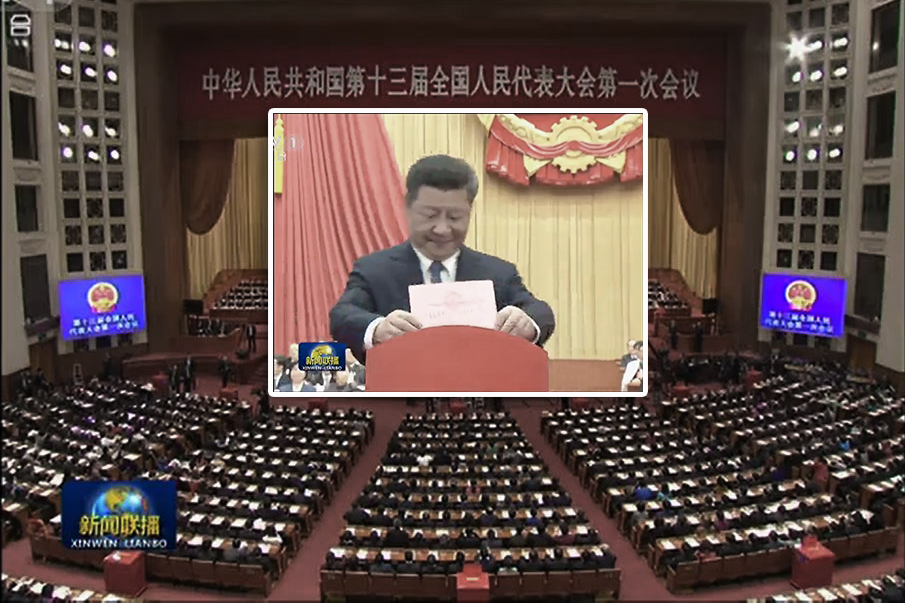 ◎ We believe that Xi’s motivation for driving reform measures is his life-and-death struggle with the Jiang faction.

On March 11, the 13th National People’s Congress voted to pass a list of constitutional amendments which included changes like removing presidential term limits and adding legislation for a new state supervisory commission.

The voting, which was described as anonymous, required a two-thirds majority to pass. The final result was 2958 “yes” votes, 2 “no” votes, 3 abstentions, and 1 invalid vote.

According to Chinese language media reports, the delegates voted by shading “support,” “oppose,” or “abstain” on optical ballot sheets. Optical sheets and pencils were provided in the auditorium. Booths to ensure voting secrecy were set up at the venue, and delegates had to deposit their optical ballot sheets in 28 ballot boxes set up in fixed locations. Delegates also had to cast their ballots in boxes that they were designated. Voting results were electronically compiled.

Foreign media were seated on the second floor of the Great Hall of the People. An announcer instructed the press to leave the venue five minutes before the delegates filled up their voting ballots, but the process of casting votes was open to the media.

The backdrop:
1. On Jan. 19, the 19th Central Committee deliberated and passed a list of changes to the state constitution at the Second Plenum. The plenum communique only noted some of the proposed constitutional amendments, including adding Xi Jinping’s political theory into the constitution and legislation for the new National Supervision Commission.

2. On Feb. 25, state media announced the full list of constitutional amendments deliberated at the Second Plenum. The timing of the announcement broke with convention since the complete constitutional changes list should have been released a week after the Second Plenum, and not over a month later. The amendments were also announced just eight days before the opening of the Two Sessions.

3. Also on Feb. 25, the English edition of Xinhua ran a separate article about the Chinese Communist Party’s proposal to remove term limits for the presidency and the vice presidency. The article was released an hour before the full list of changes were announced, and sparked an international uproar. The journalist responsible for issuing the article was punished, according to media reports.

4. Popular opinion in China and abroad regarding the dropping of presidential term limits was that Xi Jinping is planning to rule indefinitely like Mao Zedong. The CCP stepped up censorship, including blocking a string of search terms on Sina Weibo and other search sites like “emperor,” “I oppose,” and “Winnie the Pooh.” Later, even “Xi Jinping,” “Xi guan” (“habit”), “Xi yi wei chang” (“getting used to”), “Xi wu” (“practice martial arts”), “Yan Xi” (“practice”), “Xue Xi” (“study”), “Lian Xi” (“drill”) and other “Xi” related terms were blocked.

5. Delegates at the Two Sessions were careful about commenting on the constitutional amendments, and many even refused to talk to reporters about it.

6. On March 7, the website of Phoenix Television, a Jiang faction-controlled overseas news outlet, ran an editorial which indirectly encouraged delegates to vote “no” to the constitutional amendments. The editorial was subsequently deleted.

7. On March 9, He Zuoxiu, an academician at the Chinese Academy of Sciences, told Cable TV Hong Kong that indefinite rule would only “bring ruin and infamy,” and cited the case of former Chinese warlord Yuan Shikai declaring himself emperor as reason to reject the idea of removing presidential term limits. He, a Jiang faction literati, isn’t an NPC delegate.

The big picture:
1. Hu Jintao and Jiang Zemin picked Xi Jinping, a Party princeling with no faction of his own or factional aligning, as a compromise candidate for Party leader in 2007. A year later, Xi skipped the Politburo and was appointed directly to the Politburo Standing Committee. In 2012, Xi succeeded Hu as CCP General Secretary.

2. Although Jiang consented to Xi replacing Hu, he also groomed Bo Xilai to displace Xi via a coup after the 18th Party Congress. Bo sought to build political capital through a “Singing Red, Hitting Black” campaign in Chongqing and by buying influence overseas. Many people in China and abroad believed that Bo was a future political star. However, the Jiang faction’s plans were scuppered when Chongqing public security chief Wang Lijun exposed the coup plot when he tried to defect at the United States Consulate in Chengdu.

3. After Xi took office, he sought to consolidate power in the Party through a grinding anti-corruption campaign and the implementation of a new state supervisory system. He also carried out a massive military modernization reform to gain control over the People’s Liberation Army. Furthermore, Xi talked of a “constitutional dream,” and pushed legal reforms which introduced vertical control in the system of provincial courts and procuratorates while weakening the authority that provincial Party committees formerly had over legal institutions. Finally, Xi looks set to strengthen his control over the state government after the 19th Congress through institutional reforms.

Our take:
1. We believe that Xi’s motivation for driving reform measures is his life-and-death struggle with the Jiang faction. During Xi’s first term, Chinese officials widely believed that Xi would have difficulties gaining a foothold in his tussle with the Jiang faction, and hence many ended up sitting on their hands while they awaited a victor to emerge from the factional struggle. Thus, Xi made no progress with his economic reforms in his first five years in office, a point that is obvious from his 19th Congress report.

2. Xi now has the upper hand over the Jiang faction, but the next five years would be very challenging for the Xi administration. Domestically, Xi faces severe economic problems that he is trying to resolve through a deleveraging and de-risking campaign. Meanwhile, China has to contend with America’s pro-business reforms and an impending trade war.

From Xi’s perspective, it makes sense to cancel presidential term limits to send a signal that he is not a lame duck leader while buying himself time to resolve China’s economic woes. The prospect of “indefinite” rule also serves to dissuade Xi’s factional rivals and their supporters that they have a chance for a second coming while giving them incentive to fall in line with Xi instead. In other words, Xi is looking to avoid being hamstrung by factional politics like Hu Jintao, who struggled to get his orders out of Zhongnanhai.

3. The foiled coup attempt before the 19th Congress indicates that the Xi-Jiang conflict is irreconcilable. Xi will continue to be in danger of coups. (See: “Xi’s Former Top Aide Obliquely Confirms Coup by Rivals“)

4. The Jiang faction appears to be powerless to stop Xi amending the constitution, but they still showed resistance by trying to shape public opinion about the presidential term limits change.

5. We believe that the NPC voted on constitutional amendments anonymously to give an impression of democratic process. Xi is likely confident that he will still get the result he wants because officials were tightly monitored during the Two Sessions.