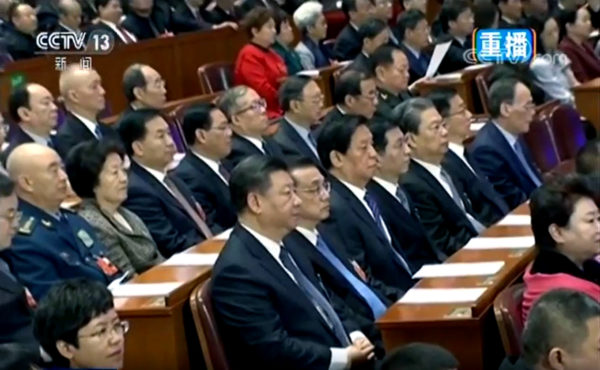 ◎ Wang Qishan’s political standing is akin to that of an “eighth” Politburo Standing Committee member.

Wang Qishan, the former anti-corruption chief, is listed among the 190 members of the 13th National People’s Congress presidium, according to the official name list released on March 4.

On China Central Television’s Xinwen Lianbo news program of the 13th NPC’s first session on March 4, a shot of the Politburo Standing Committee revealed that Wang was seated in their row and positioned directly after seventh-rank Han Zheng. Each Standing Committee member had three seconds of individual screen time, and a shot of Wang immediately followed Han’s. The camera shot of Wang also showed three empty seats beside him in the row.

The backdrop:
At the 19th Party Congress last October, Wang Qishan didn’t make the new Politburo Standing Committee or the Central Committee. Many observers presumed that Wang had retired.

On Jan. 29, Wang was listed as a delegate to the NPC for Hunan Province.

On Feb. 13, Wang didn’t make a list of “old comrades” whom Xi Jinping and the Central Committee were scheduled to visit over the Lunar New Year holidays.

2. Wang is virtually locked in for the position of Chinese vice president.

3. We wrote on Oct. 18 that Xi might appoint Wang as vice president.

Xi Jinping May Turn to Top Ally to Handle US Pressure