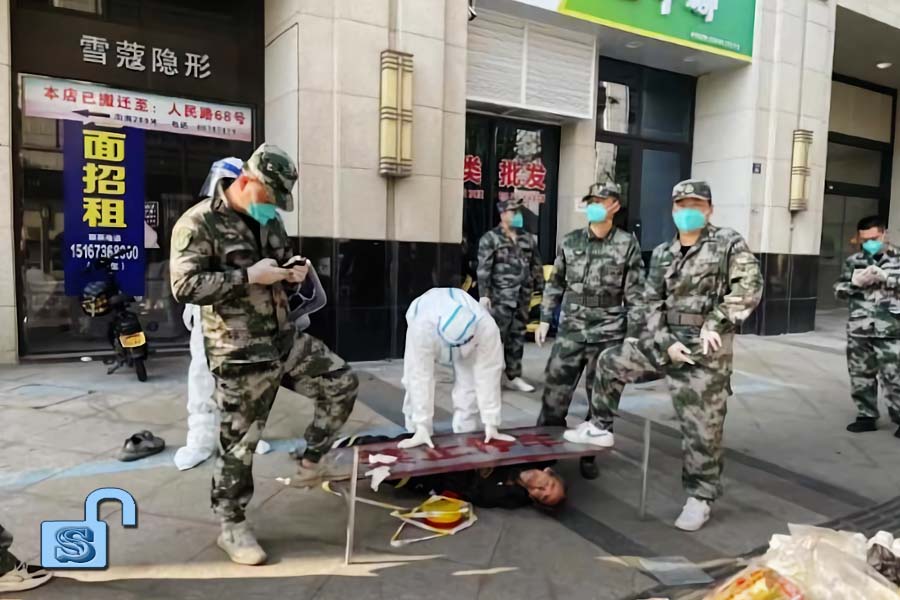 The Shanghai lockdown and those in other areas are starting to weigh on the Chinese economy.

◎ The Shanghai lockdown and those in other areas are starting to weigh on the Chinese economy.

Shanghai largely kept COVID-19 at bay over the past two years through the implementation of targeted epidemic prevention and control measures. So-called “precise epidemic prevention” saw the city maintain relatively regular operations and avoid crushing city-wide lockdowns for the most part.

All this changed when the Omicron strain swept through Shanghai in March. By the end of the month, the city’s government had traded in its milder epidemic measures for bona fide “zero-COVID,” suddenly staggering 25 million people into draconian lockdown. A humanitarian crisis ensued as people ran out of food, had difficulties accessing medical facilities for non-COVID illnesses, were herded into mass-quarantine centers with assorted issues, and briefly saw COVID-positive young children separated from their parents before a massive public outcry forced the authorities to amend the policy.

Small-scale protests erupted in a number of local communities, and the Shanghai government quietly stepped up security presence in early April to carry out what local residents exposed as “militarized management” of the city.

The Shanghai lockdown and those in other areas amid the recent wave of coronavirus outbreaks have also started to weigh on the economy. Early economic data signals bleak times ahead and increasing political pressure for the Xi Jinping leadership.

Auto troubles
Shanghai is home to several local and foreign automotive plants like General Motors, Tesla, Aptiv PLC, Thyssenkrupp, Volkswagen, SAIC Motor, and Nio. While a handful of manufacturers like SAIC Motor have sidestepped the lockdown problem by ordering their workers to live on the factory campus in a “bubble-like” environment, many plants have been forced to suspend production.

Prolonged shutdown will hit production hard. For instance, Tesla’s Gigafactory Shanghai delivered 310,000 vehicles to customers in the first quarter of 2022, including 65,814 in March. However, the factory entered its longest production halt since manufacturing started in late 2019 when it suspended operations on March 28. A fortnight later, Tesla is preparing for a scenario where production cannot restart until the end of April, according to The Wall Street Journal. With Gigafactory Shanghai’s production capacity of over 2,000 vehicles a day, a 34-day halt means at least 68,000 fewer vehicles rolling off the factory floor.

Supply problems resulting from lockdowns are also hampering production. Chinese electric car manufacturer Nio announced that it was suspending production on April 9 because its supplier partners in Jilin, Shanghai, and Jiangsu halted operations due to the pandemic. “Cars can’t be produced without parts,” wrote company CEO William Li in announcing the suspension of production on Nio’s mobile app. “We are as anxious as everyone else and hope that the pandemic will pass soon.”

Car sales for March hint at very tough times for the auto industry and the Chinese economy in general. The China Passenger Car Association (CPCA) reported on April 11 that car sales in China fell 10.5 percent in March from a year ago to 1.58 million vehicles. On a quarter-to-quarter basis, car sales dropped 4.5 percent year-on-year, the third consecutive quarter of declines. CPCA secretary-general Cui Dongshu said that COVID outbreaks had a “tremendous impact” on car production, consumers are going out less to make purchases, and various epidemic prevention and control measures in cities are delaying car deliveries. Meanwhile, Sanford C. Bernstein analysts lowered their 2022 auto sales forecast by 500,000 vehicles to 22.5 million vehicles; China sold 26.3 million passenger and commercial vehicles in 2021, according to China Association of Automobile Manufacturers data.

Economic slowdown
Shanghai is a first-tier Chinese city with one of the highest annual growth figures, a key port and international hub, a leading business, financial, and service center, and a productive manufacturing base. The lockdown of the city would naturally have a ripple effect on the Chinese economy on the whole.

Many economists have slashed their annual growth forecasts for the Chinese economy to just 5 percent, below the official target of around 5.5 percent. Banks like Citigroup are warning of growth risks in the second quarter.

Data for March offer a glimpse of the economic toll of “zero-COVID” in Shanghai and elsewhere. The official manufacturing Purchasing Managers’ Index (PMI) and the non-manufacturing PMI fell to 49.5 from 50.2 and 48.4 from 51.6 respectively in March from a month ago, the first time that both PMI indexes went into contraction territory since the 2020 Wuhan lockdown. Meanwhile, the Caixin/Markit manufacturing PMI, services PMI, and composite PMI dropped to 48.1 from 50.4, 42.0 from 50.2, and 43.9 from 50.1 respectively in March from the previous month, the steepest decline since the first COVID outbreak in February 2020.

On April 11, the National Bureau of Statistics reported a 1.5 percent increase in inflation in March, the fastest year-on-year gain in three months. Vegetable prices grew more than 17 percent from a year ago, while fruit and flour prices were up 4.3 percent and 4.6 percent respectively. Tourism revenue over the three-day Qingming Festival national holiday also fell 31 percent from a year ago to 18.8 billion yuan, or 39 percent of the level in 2019 before the pandemic, according to Ministry of Culture and Tourism figures.

Political epidemic
Omicron may be more transmissible than earlier variants of the virus, but it also generally produces milder symptoms. Several countries that reimposed tough coronavirus restrictions to deal with Omicron soon removed them and proceeded to “live with the virus.” In a leaked recording circulating in February, an adviser to the PRC leadership noted the milder nature of Omicron and speculated that the U.S. and European countries did away with restrictions to help the population achieve herd immunity.

The adviser’s views and the experiences of other countries, however, have not swayed the Shanghai local government or the Xi leadership from doubling down on extreme measures in the city. Xi and his ally Li Qiang, Shanghai’s Party boss, dare not deviate from Beijing’s current epidemic prevention policy even if it goes against the science because it has become part of Xi’s political legacy. Backtracking now would be tantamount to an admission of failure, something that Xi cannot abide as he makes a bid for a norm-breaking third term in office at the 20th Party Congress near the end of the year.

Yet sticking to “zero-COVID” also undermines Xi. Mounting social and economic problems in Shanghai and elsewhere will tarnish Xi’s political legacy regardless, and offer a golden opportunity for his political foes in the Party elite to attack him and firmly put their foot down on allowing him to extend his tenure. To counter the pushback, Xi will be compelled to target the policy legacy of his political enemies and step up the anti-corruption campaign. Worsening political contradictions in the CCP regime will lead to a serious crisis for the Xi leadership and pave the way for Black Swans to emerge in China.