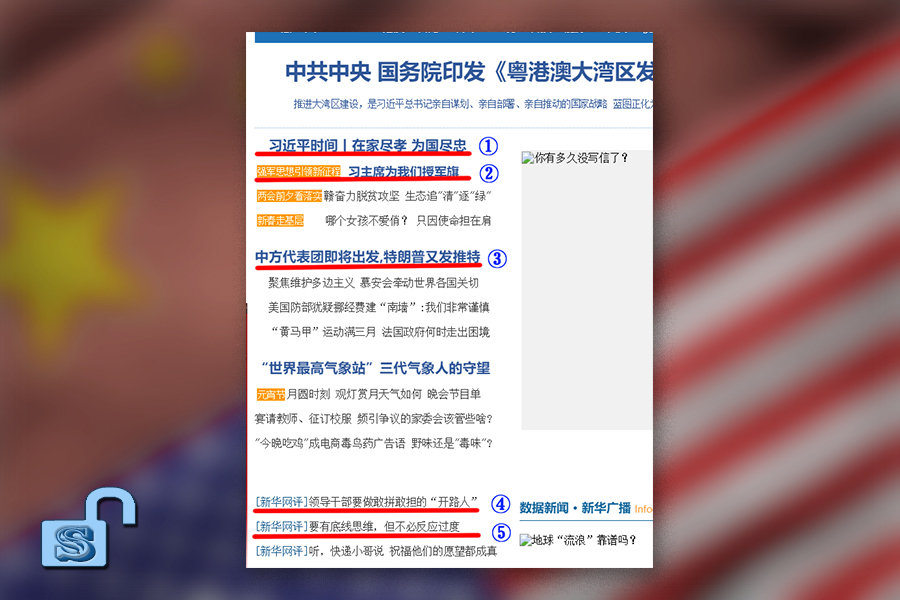 ◎ The propaganda narratives in Xinhua lay the groundwork for Xi to agree to U.S. demands on sensitive issues like structural reform without losing face at home.

We spotted a shift in the Party’s propaganda narrative in the week of Feb. 11 (for the full analysis, see the Feb. 14 issue of SinoWeekly Plus).

The headlines in Xinhua’s Chinese language homepage on Feb. 18 confirms a trend in Beijing’s propaganda push:

The three narratives above lay the groundwork for Xi to agree to U.S. demands on sensitive issues like structural reform without losing face at home, or at least minimize potential pushback from the populace. The narratives also signal to Xi’s rivals or would-be opponents that he is the paramount leader and that they should not seek to challenge him on his decisions, especially with regard to the trade deal.

Parsing propaganda
Xinhua propaganda is aimed at shaping the thinking of a mainland audience and signaling what is “politically correct” for officials at a given point in time.

Five headlines on Xinhua’s homepage on Feb. 18 (see cover image) underscore the three narratives which we mentioned above:

Headline 1: “Xi Jinping Time | Utmost Filial Piety in the Family, Utmost Loyalty to the Nation”
Headline 2: “Strong Military Thoughts Paves a New Path | Xi Jinping Hands Us Military Colors”
Headline 3: “As the Chinese Delegation is Sets Off, Trump Sends Another Tweet”
Headline 4: “Xinhua Commentary: Leading Cadres Must be ‘Trailblazers’ Who Dare to Go All Out and Shoulder the Burden”
Headline 5: “Xinhua Commentary: Keep the Bottom Line in Mind, But Don’t Overreact”

1. The effect of positioning Headline 1 (loyalty to the nation) above Headline 3 (news on the trade negotiations) telegraphs the message that Xi cares for the people and the country, and will look out for their best interests in matters such as trade talks with America. Put another way, Beijing is leaving itself room to make the case later that any concession made to the U.S. is in China’s interests, and not an attempt to “sell-out” the country and the people.

Beijing can also use the “in the people’s best interests” propaganda narrative to justify failure to reach an agreement. In that scenario, Xinhua can explain that Xi decided not to sign a trade deal because it does not benefit China.

2. Headline 2 is a part of a series of articles on Xi Jinping and the military that were published recently. The fact that Beijing feels a need to emphasize Xi’s paramount command over the military during a crucial period of Sino-U.S. trade negotiations suggests that Xi is not completely confident that he is fully in charge, and/or unsettled elements in the military could be causing trouble. Thus, Xi has to stress to the troops and the regime that he is the boss and that they should be loyalty to his leadership.

Another likely purpose of articles like Headline 2 is to remind Xi’s political rivals that the “Party’s gun” (“槍桿子”) answers to him, and they should think twice about trying to challenge his authority or undermine his policies.

3. Headlines 4 and 5 are geared to the officialdom and appear to be asking for loyalty to Xi when he makes potentially controversial decisions on the trade deal.

Headline 4 strikes a reform-minded tone. It echoes a recent Central Military Commission guideline on appointing “fearless” but inexperienced military cadres who made “mistakes” in the process of pushing military reforms, as well as a call by Xi to build “high-quality” officials in the regime in January.

Get smart:
1. Beijing is preparing to make concessions to get a trade deal. Based on the Chinese Communist Party’s past behavior and characteristics, however, it is hard to envision a case where it fulfills the concessions in good faith. Hence, we are not surprised if there is a ceasefire in the trade war in March, but the U.S. escalates matters (increased tariff rates, additional tariffs) down the road.

2. Xi Jinping faces very high levels of political risk, and will see even greater risks after the signing of a trade agreement.

Xi’s political rivals, particularly those in the political and legal affairs system, are at very high risk of being purged in the coming months. 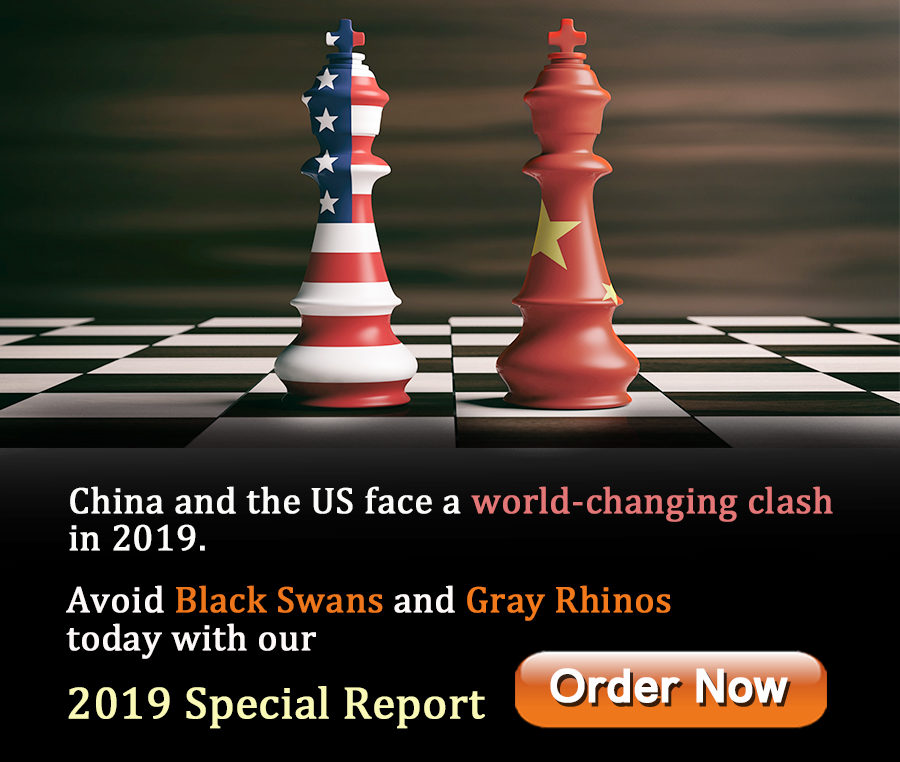