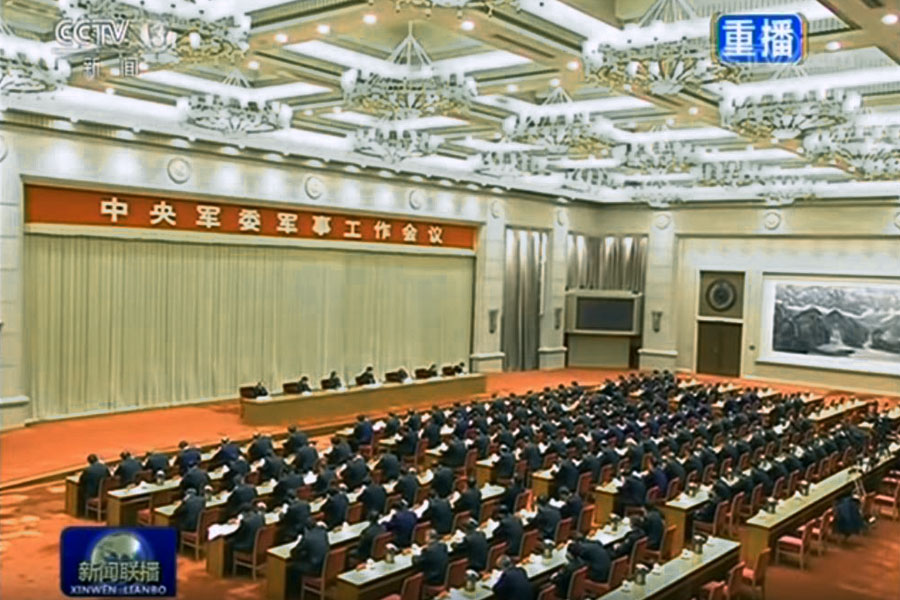 ◎ Xi is likely seeking to strengthen his control over the military in a crucial period.

2. Pass on the spirit of the enlarged meetings of the local military theater Party committee and the National Defense Mobilization Department of the CMC.

4. Uphold the Xi “core” leadership, the authority of the CCP Central Committee, and the CMC chairman responsibility system.

The backdrop:
1. Xi Jinping chaired a meeting of the CMC on Jan. 4. During the meeting, he ordered the military to “enhance combat readiness” and signed a mobilization order for the training of troops.

The big picture:
1. The week of Jan. 7 saw China and the United States hold vice ministerial-level trade negotiations in Beijing.

2. The rescheduling of provincial-level “Two Sessions” suggests that the 19th CCP Central Committee could hold its Fourth Plenum near the end of the month.

Our take:
1. From the official news reports of the enlarged military meetings and the over 100 attendees of the CMC meeting on Jan. 4, it appears that the Jan. 4 CMC meeting was an enlarged meeting.

Xi Jinping might have convened an enlarged meeting of the CMC to further consolidate his authority and demand that the military show its fealty to the Xi “core.”

2. Many observers believe that Xi’s call for the PLA to “enhance combat readiness” is aimed at threatening Taiwan since the CMC meeting (Jan. 4) was held shortly after Xi made a speech to mark the 40th anniversary of improving PRC-ROC relations (Jan. 2).

While we concur that the CMC meeting may be held with Taiwan in mind, we believe that it had the more pressing purpose of suppressing domestic political tensions to allow Xi to convene the Fourth Plenum. (See our Dec. 17 analysis: “Xi’s Reform Anniversary Speech Signals Political Crisis in China”)

The CCP typically does not publicly report that a CMC enlarged meeting had been convened. A rare exception is the November 2012 meeting, which was publicized in a high-profile manner.