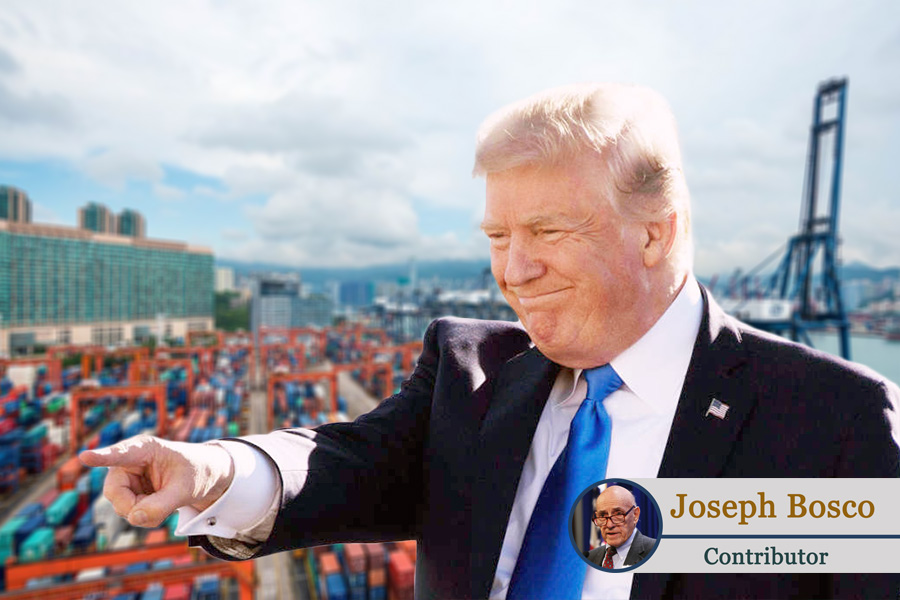 ◎ The outcome of the trade confrontation, and the lessons it teaches, will greatly influence the likelihood of actual conflict in the future.

President Trump just took the latest escalatory move in a trade war the United States and China are vigorously waging as either a proxy for a shooting war, or a run-up to one. The outcome of the trade confrontation, and the lessons it teaches, will greatly influence the likelihood of actual conflict in the future. It is essential that we win this one in order to deter a real one.

The psychological dynamics at play in the trade dispute are the same as would apply in a kinetic conflict. As important as the parties’ actual strengths and vulnerabilities are their respective perceptions of each other’s capabilities and intentions, willingness to inflict and absorb pain, inclination to escalate or to use diplomatic off-ramps to avoid conflict, and other factors that enhance or diminish deterrence.

In the staring contest between President Donald Trump and Chinese leader Xi Jinping, Beijing is betting that Trump will blink first. Its wary confidence is based on two earlier encounters with the U.S. president.

Trump told Xi he wouldn’t do it again without contacting him first. He did not say he would ask permission or give China a veto, but that is how most media and expert opinion — and almost certainly, Beijing — interpreted it.

In the other prominent case, the Trump administration banned ZTE, a major Chinese telecom company, from acquiring U.S. parts and software because it illegally sold prohibited technology to North Korea and Iran. The U.S. action would have driven ZTE out of business and presumably cost the jobs of some 70,000 Chinese workers.

Again, Xi made a personal appeal to his newfound friend in the White House, explaining that for China’s economy, ZTE was too big to fail. Trump, conscious of Beijing’s critical role in the North Korea nuclear crisis, was more than willing to cooperate, and directed his Commerce Department to reverse the decision.

This may have been the first time in the history of international negotiations that the party with the dominant hand took the pressure off — not for fear of retaliation but out of compassion that it was working too well and imposing too punishing a cost on its adversary.

ZTE was saved, though Xi had done little on North Korea to deserve Washington’s generous favor. In fact, his personal intervention clearly stalled the progress Trump and North Korean leader Kim Jong Un appeared to be making on a denuclearization agreement. For decades, Beijing has dined off the ongoing nuclear and missile crisis and the diplomatic leverage it gained from keeping it roiling.

Trump publicly noted China’s non-cooperation and seemed to relish imposing tariffs on Chinese exports, ostensibly on the merits of the trade issues but with a hidden message about North Korea. All the while, he accused Beijing of the reverse motivation — blocking progress on North Korea because of tough U.S. trade actions.

In linking trade and security issues, both sides recognize there is more at stake than imports and exports, tariffs and duties. Trump and Xi are locked in a test of wills in the context of more dangerous zero-sum face-offs that loom over the South China Sea, Taiwan and the Korean Peninsula.

Has Beijing taken away from the two earlier episodes the idea that Trump will reverse course if Xi reacts strongly and accuses him of hurting the feelings of the Chinese people, i.e., his own?

Or, are the Chinese about to learn to their surprise that Trump’s will is indomitable and his empathy goes only so far when U.S. national interests are at stake? And, that he has a national security team committed to carrying out the tougher policies?

The answers to those questions could be existential, given the decades of U.S. policymakers grievously misreading China’s hostile intentions and avoiding confrontation at every turn.

In the trade battle, Trump is sending a clearer, stronger signal to Chinese leaders who may have misread his earlier goodwill as bluff and weakness — something they experienced with previous administrations (e.g., the Syrian red line).

They seemed to assume that responding to Trump’s initial imposition of $50 billion in tariffs on Chinese goods with their own tariffs on U.S. exports, especially agricultural products, would cause Washington to back off. Instead, Trump more than doubled down and announced $200 billion worth of additional tariffs on an even broader range of Chinese goods.

This is the kind of mutual escalation that could readily occur in a military conflict, which could erupt over any of Asia’s major flashpoints. Beijing long has relied on the expectation that U.S. political leaders are unwilling to pursue foreign policy objectives that impose pain on their own constituencies and to pay the political price for doing so.

This president is proving in the economic realm, as he did earlier on North Korea, that Chinese leaders no longer can count on that restraint — a lesson they would be wise to absorb as they decide whether to pursue their aggressive goals in the region.