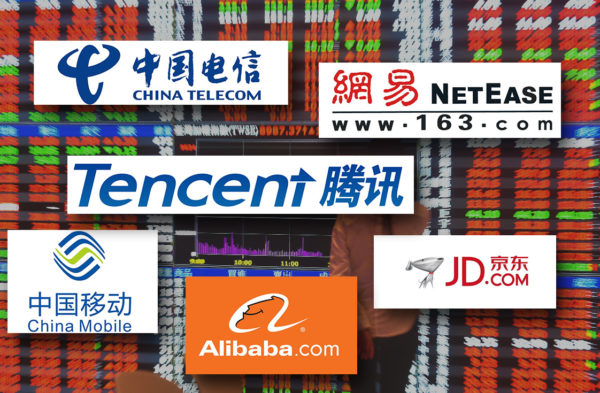 ◎ China wants tech giants and “unicorns” to list in domestic markets to prevent a liquidity crunch that could trigger a debt crisis.

Through the Chinese Depositary Receipts (CDR) mechanism, Chinese tech giants and “unicorns” (unlisted private companies worth $1 billion and are not more than 10 years old) can float shares or launch initial public offerings on the A-share market.

According to the guidelines, CDRs apply to companies in sectors that possess critical technology that complies with China’s national strategy policies, including internet and software, big data, cloud computing, artificial intelligence, semiconductors, biotech, high-end manufacturing, and others. These innovative companies should also have valuations of at least 20 billion yuan (about $3.2 billion) and annual revenue of not less than 3 billion yuan.

The guidelines also touched on the issue of optimizing the issuance of securities, as well as the variable interest entities of innovative companies and other company governance issues.

The CDR plan appeared to have been approved at warp speed, with the China Securities Regulatory Commission floating the idea in early March and the State Council passing the guidelines on March 22.

The big picture:
1. The Trump administration’s tax cuts are attracting capital and industries to the United States and having an impact on the Chinese economy. Also, Trump is planning to impose $50 to $60 billion of tariffs on Chinese imports.

2. The Xi Jinping administration is in the midst of a de-risking and deleveraging campaign. Chinese regulators are supervising and investigating financial institutions with unprecedented strictness, and efforts are being made to reduce debt.

3. A May 1 value-added tax rate reform on the manufacturing, transportation, construction, telecommunication and agricultural sectors will result in annual savings of 400 billion yuan (about $63.5 billion).

Our take:
1. China wants tech giants and “unicorns” to list in domestic markets to prevent a liquidity crunch that could trigger a debt crisis. In our article analyzing the merger of the banking and insurance regulators, we noted that China’s banking and insurance sector needs to undergo deleveraging and reduce its asset-liability ratio to prevent financial risks from blowing up. And in the current liquidity squeeze, the securities regulator needs to arrange for top companies to list shares domestically and jumpstart the markets.

2. China has to ensure that its innovative companies can operate normally to maintain confidence in its markets. If the companies cannot continue normal operations, then China will be in trouble in an unfriendly business climate.

Unlike the U.S., China’s tax cuts are not attractive enough for businesses to consider staying in the country, and can only be counted as a declaration of intent. In fact, China’s tax cuts would just add to its financial pressures.

3. Chinese unicorns need a ceaseless stream of funding to maintain growth. The earlier crackdown on internet financial companies has exposed severe debt risks in the sector. And once the markets grow cautious to venture capitalists, unicorns could meet with financing constraints.

4. We believe that Beijing is rushing the entry of unicorns and tech giants into the A-shares market to burnish its prestige and preserve confidence in the markets. Also, unicorns can cope with future liquidity contractions when the Chinese people buy CDRs of top tech companies.