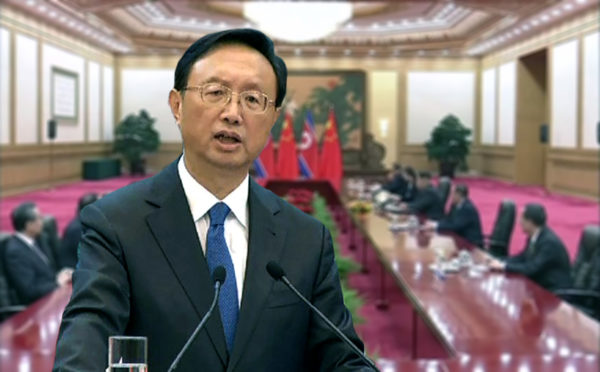 Yang, a Politburo member and Foreign Affairs Work Commission director, would be making the trip as Xi Jinping’s special representative.

The backdrop:
1. According to South Korean newspaper Chosun Ilbo, Xi Jinping “squeezed out time” during the Two Sessions meeting to meet with South Korean national security director Chung Eui Yong when he visited Beijing on March 12.

Before meeting Xi, Chung held talks with Yang Jiechi, who asked him to reveal “all details about Kim Jong Un.” A week earlier, Kim hosted a high-level South Korean delegation in Pyongyang and asked pass on a message to President Donald Trump inviting him to meet.

2. On March 16, the South Korean foreign ministry announced that Yang Jiechi’s March 21 to March 22 visit would be rescheduled to March 28 to March 29.

3. From March 25 to March 28, Kim Jong Un visited Beijing, his first official overseas trip since 2011. The trip was unannounced until its conclusion, and Beijing accorded Kim with state visit-level reception. According to a Xinhua report, Kim agreed to the denuclearization of the Korean Peninsula.

Our take:
1. We wrote earlier that Yang Jiechi’s trip to South Korea was likely delayed because he was either in trouble or there was trouble on the Korean Peninsula. Now it is evident that Kim Jong Un’s Beijing trip was the reason; the secrecy surrounding visits by North Korean leaders to China meant that the international community could not detect any signs that foreshadowed Kim’s trip until he was in Beijing.

2. We also wrote that Yang would likely head the Foreign Affairs Work Commission and its administrative office. State media reporting of Yang at the Xi-Kim summit confirms that he is presently the director of the Foreign Affairs Work Commission Office. Barring any surprise arrangements, Yang should also be named as secretary-general of the Party’s foreign affairs agency.

3. In our analysis of Kim’s Beijing trip, we noted that Trump’s “maximum strategy” is very effective and he would likely want to resolve the North Korean issue while he is in office. The upcoming Trump-Kim summit in May could see progress towards peace and denuclearization on the Korean Peninsula.

4. We believe that Kim is willing to denuclearize in exchange for keeping his rule over North Korea because he lacks better options in the present international climate. During his South Korea trip, Yang Jiechi will likely update the South Korean authorities on the Xi-Kim meeting, and discuss plans for the lifting of sanctions and the resumption of economic aid to North Korea.