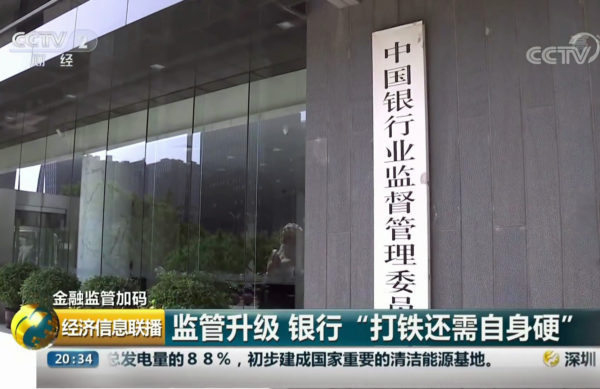 ◎ The CCP has noticeably ratcheted up its supervision of the financial sector in 2018.

In the first month of 2018, the China Banking Regulatory Commission (CBRC) rolled out a slew of new supervisory measures. In accordance with the tougher regulatory climate, local banking regulatory departments issued a total of 497 violations (averaging a high of 16 violations a day) to law-breaking financial institutions and collected 897 million yuan (about $142 million) worth of fines.

Three of the biggest cases in January involved the Chengdu branch of Shanghai Pudong Development Bank, Industrial and Commercial Bank of China branches in Heilongjiang, and a Gansu branch of the Postal Savings Bank of China Co. The fines collected from these three cases was 799 million yuan, or 89 percent of the total fines banking regulators collected for the month.

In 2017, the CBRC’s inspection of negotiable instruments turned up 2 trillion yuan worth of violations.

Why it matters: The Chinese Communist Party (CCP) has noticeably ratcheted up its supervision of the financial sector in 2018.

1. The CBRC’s unprecedented, extra stringent oversight of the financial industry indicates that China’s economic risks are in grave danger of blowing up. The CCP’s political legitimacy is at stake, and time is running out for the Xi Jinping administration to fix the problems.

2. We noted in our assessment of the 19th Party Congress in October and in our China 2018 outlook that the Xi leadership will focus on cleaning up corruption in the financial sector and tighten up regulation.

3. For companies in mainland China, political risk is the greatest risk to account for. Understanding China’s political directions will allow companies to sidestep or mitigate their exposure to political risk.