◎ Team Biden will leave the CCP with clear avenues to “reset” relations with the U.S., sabotage Washington’s “new cold war” footing, and restart its own ambitions for global hegemony.

Speaking on Nov. 28 before an audience in Shanghai, Renmin University professor of international relations Di Dongsheng boasted about the advantageous position Beijing would enjoy following the victory of Democratic candidate Joe Biden in the 2020 U.S. presidential election.

A Biden presidency, Di said, would return U.S.-China relations to the era where the Chinese Communist Party (CCP) could smooth out any issue using its “‘old friends’ in America’s core inner circle of power and influence,” and a stack or two of American dollars. With Donald Trump removed, Wall Street would be free to lobby “the traditional elite” represented by the Biden “establishment,” allowing Beijing to make “a lot of ‘deals.’”

The leaked video of Di celebrating the CCP’s influence in U.S. elite circles circulated widely via Chinese-American social media personalities. It was carried by top political commentator Tucker Carlson on Fox News, then shared by President Trump among his millions of Twitter followers.

Time will tell as to whether Biden has indeed beaten Trump at the ballot box—or if the maverick president has secured a second term. Meanwhile, Di’s speech highlights salient realities about the Sino-U.S. relationship and the free world’s prospects should Team Biden enter the White House on Jan. 20.

‘Competition without confrontation’
In the lead-up to the U.S. election, observers noted the stark lack of coverage regarding Biden’s political positions. Most media outlets portrayed the 78-year-old as a moderate politician who represented normalcy and partnership with U.S. allies, the antithesis of Donald Trump and his “America First” program.

On China, Biden was similarly vague. Apart from offering a one-off condemnation of Chinese leader Xi Jinping as a “thug” and touting “competition” with China, the former vice president demurred from explaining what Americans and the rest of the world could expect from a Biden presidency when it came to countering the CCP.

Biden was notably unwilling to name China the primary threat to the United States, an assessment the Trump administration had made in 2017 with that year’s National Security Strategy and only further elaborated upon since.

Biden’s positions have become clearer since the Nov. 3 election. Many of Biden’s proposed cabinet picks are long-time bureaucrats, lobbyists, or corporatists, and are multinational in view—in short, figures associated with cozy U.S.-China relations. For example, Janet Yellen, Biden’s pick for Treasury Secretary as reported by The Wall Street Journal, expressed her opposition to Trump’s trade and tech war during an event in January 2020. Jake Sullivan, Biden’s long-time aide and his pick for National Security Advisor, said in 2017 that the U.S. should encourage China’s peaceful rise.

The Virginia-based Politico Magazine reported that a well-placed consulting firm founded in 2017, WestExec Advisors, “now looks like a government-in-waiting for the next administration,” with its staff consisting heavily of Obama-era former national security and foreign policy officials who “raised money for the Biden campaign, have joined his transition team, or have served as unofficial advisers.” Tony Blinken, Biden’s pick for Secretary of State, is a co-founder and managing partner at WestExec.

The Washington Free Beacon reported Dec. 2 that “as recently as late July, WestExec Advisors touted its work helping major American universities court donations in China without jeopardizing Pentagon-funded research grants,” achievements that have since been scrubbed from its website. WestExec’s work runs counter to the Trump administration’s China policies, which include curbing CCP influence in America’s universities.

Shortly after Biden and his running mate Kamala Harris gave acceptance speeches on Nov. 7, the South China Morning Post cited a Chinese official as saying that Beijing had “revived stalled backchannel diplomacy” with the U.S. via a “semi-official communication channel” that had gone inactive in recent months due to the Trump administration’s confrontational stance on the CCP.

As we wrote in a Nov. 26 analysis, Biden would “return to the pro-China ‘engagement’ strategy, though it may superficially appear as ‘competition.’” Biden’s stance contrasts with the Trump administration’s tough, principles-first approach to the “China Challenge.”

‘Great reset’
Reviewing a 110-page document by the “unity task force” of Biden and socialist candidate Bernie Sanders, conservative radio host and constitutional lawyer Mark Levin found many similarities between the recommendations listed in the document and the 1936 constitution of the Soviet Union. Most notably, according to Levin, the document proposes centralized regulatory and tax agencies controlled by the Democrats to handle six aspects encompassing much of American society.

A socialist program may seem contradictory, given the evidently close relationship between Biden and Wall Street, which for generations has stood as the symbol of American capitalism. In practice, however, the doctrines of Karl Marx and Vladimir Lenin—who advocated socialism as the primary stage of communism—do not preclude cooperation with capitalists in achieving revolutionary goals.

Marxist philosophy centers on the fundamental issues of power and class-on-class struggle. While communism and other left-wing ideologies claim to be “for the people” or other downtrodden groups, in practice, they are always the justification wielded by a small group of elites to establish monopolies over political power, establish a totalitarian program, and deprive the general public of their property and rights.

The growing “equality of outcome” rhetoric of mainstream figures on the political Left, and the obscuring of heinous crimes committed by socialist and communist regimes over the last century, have helped normalize strains of Marxist thought in the United States and other democratic countries.

Biden’s messaging suggests that he will use the pandemic to expand and entrench elite control over America. During the presidential debates, Biden forecasted a “dark winter,” saying he would approve of more lockdowns if it means “following the science.”

Team Biden is preparing to take advantage of the pandemic to implement a Davos-approved “great reset” of America and American society. The promise to “build back better”—in other words, establishing socialism in America using nonviolent means like high taxation, income redistribution, and “social justice”—would see democratic America come to increasingly mirror Communist China.

President Trump is an active defender of traditional American values and principles, while his administration’s Secretary of State Mike Pompeo unapologetically champions freedom and democracy abroad. Pompeo’s no-holds-barred exposure of CCP malign activity, willingness to challenge the Party on ideological grounds, and frequent comparisons between the Communist Party and bygone brutal dictatorships, has seen Party propaganda and diplomatic corps target him with heated invective. By contrast, a Biden administration with its thinly-veiled socialist program and compromising foreign policy is poised to drop all meaningful confrontation with the CCP. Already, Chinese officials, Party-controlled outlets, and figures like Di Dongsheng are celebrating Biden as a “predictable”—that is, controllable—U.S. leader.

A Biden presidency would see Xi and the CCP weather the “perfect storm” of crises it currently faces, such as serious economic challenges and existential geopolitical pressure in the form of the Trump administration’s hardline China stance. Absent the current checks on the Party’s worldwide influence, the CCP will find clear avenues to “reset” relations with the United States, sabotage Washington’s “new cold war” footing, and restart its own ambitions for global hegemony.

Constitutional solutions
Most media and public figures have called the U.S. election for Biden. However, Trump has not conceded the race and there remain several legal and constitutional means by which he can still secure a second term. Thousands of sworn witnesses have testified to massive and systemic electoral fraud and irregularities in multiple key states. And at least 18 states plus President Trump have joined a Texas lawsuit filed in the U.S. Supreme Court alleging that Pennsylvania, Georgia, Michigan, and Wisconsin conducted their elections in violation of the U.S. Constitution.

In line with the desire of the Founding Fathers to set up “every practicable obstacle” to “cabal, intrigue, and corruption,” the Trump campaign could use the remaining weeks until Jan. 6—the day Congress counts the electoral votes—to run its case through the American court system and rouse the public. An election voided by fraud would then be decided by state delegations to the U.S. House of Representatives, of which a majority are for the Republican Party.

As alluded to by professor Di Dongsheng, a Biden administration would be massively advantageous for Communist China’s hegemonic ambitions. This, however, will not come to pass should Trump and his supporters pull through to hold the White House. Rather than trusting legacy media and CCP propaganda narratives, investors, firms, and governments are advised to make China plans after the U.S. election is officially finalized to avoid risks and uncover opportunities. 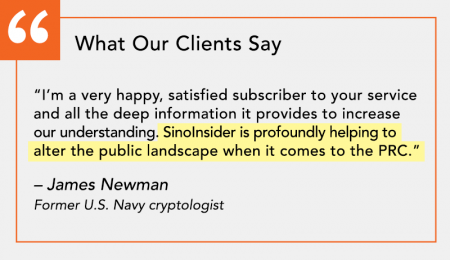