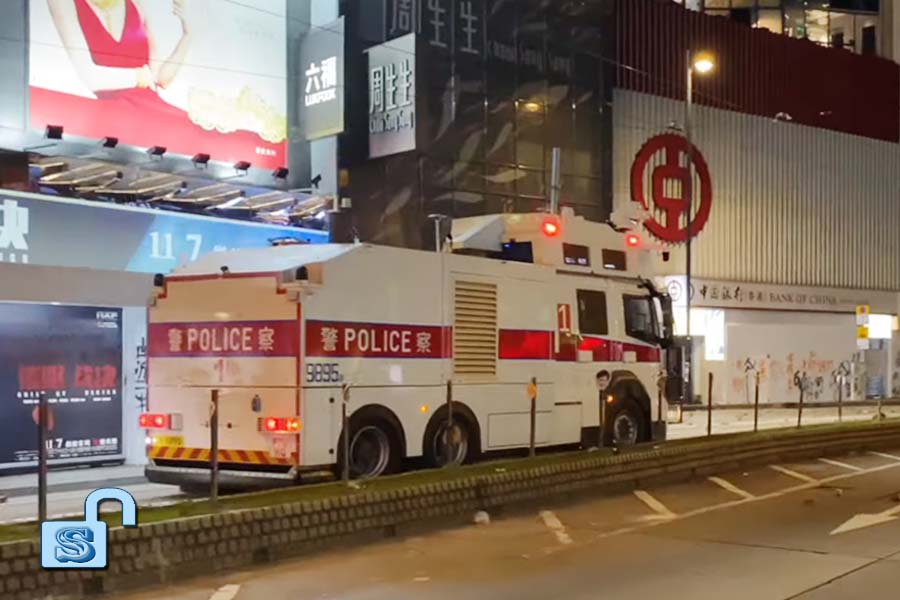 ◎ Based on our observation, the CCP is again preparing to shift strategies in Hong Kong as it pursues short, medium, and long-term agendas.

On Oct. 31, the 19th Central Committee of the Chinese Communist Party issued an official communiqué on its recently concluded Fourth Plenum (Oct. 28 to Oct. 31).

The communiqué made three points on Hong Kong:

During the Fourth Plenum period and after, several peculiar developments unfolded:

Oct. 28
1. During a police press conference, a spokesperson announced that former Hong Kong police deputy commissioner Alan Lau Yip-shing would be again leaving the force on Oct. 31, the last day of a three-month contract. In August, Lau was appointed to the temporary post of deputy commissioner on special duty to deal with the Hong Kong protests. “As the current situation has improved relative to the previous months, [Lau] thought that there was no need to extend his appointment,” the spokesperson said. According to news reports, Lau was expected to extend his temporary contract to six months.

2. Yau Ching-yuen, founder of Hong Kong online media Post 852, claimed in a video that Hong Kong police commissioner Stephen Lo Wai Chung recently met with Zhao Kezhi, the PRC Minister of Public Security and newly appointed deputy group leader of the Central Coordination Group for Hong Kong and Macau Affairs, in Beijing. According to Yau, Zhao requested that Lo take three actions to address complaints about excessive police behavior in dealing with the Hong Kong protests, including “handing people over [to be disciplined]” (交人), establishing an independent committee to investigate the police, and placing that independent committee under the oversight of Hong Kong’s Independent Commission Against Corruption.

Shek said, “The ‘five demands’ have nothing to do with housing. The young people want justice!” The five demands (五大訴求) of the Hong Kong anti-extradition bill protesters include:

2. On the same day, over a hundred Hong Kong people gathered to protest shady police activity in a local district. In dispersing the protesters, the police rushed into nearby housing estates and shopping malls without a search warrant to make arrests. The police also forced many local residents to kneel on the floor and raise their hands in the air while they were being searched. Because it is not technically illegal to hold mass gatherings in private property like shopping malls, the police do not have a legitimate excuse to make arrests.

Oct. 31
1. An assistant clerical officer from the Hong Kong Chief Secretary for Administration’s office was arrested during a rally in Mong Kok. CCP mouthpiece People’s Daily later singled out the arrest in a commentary piece about how Hong Kong civil servants who support the protests should “burn with the rioters.”

2. Hong Kong media reported that a 28-year-old firefighter stationed at the Tuen Mun Fire Station was arrested in Mong Kok on “suspicion of assaulting police and illegal assembly.”

3. The Hong Kong Secretary for Justice applied for an injunction order “against promotion, encouragement and incitement of the use or threat of violence via internet-based platform or medium” from the city’s High Court. The High Court issued an interim injunction order “to restrain persons from unlawfully and wilfully conducting themselves” in several acts, including “wilfully disseminating, circulating, publishing or re-publishing on any internet-based platform or medium (including but not limited to LIHKG and Telegram) any material or information that promotes, encourages or incites the use or threat of violence, intended or likely to cause.” The interim injunction order will remain in force until the morning of November 15, 2019.

Nov. 2
1. Hong Kong police fired large numbers of tear gas canisters to disperse several legal gathering in the city, including a district councilor election gathering at Victoria Park attended by 100 election candidates. The police arrested three election candidates and pepper sprayed one of them to subdue him.

2. The Hong Kong police dispatched water cannon trucks to disperse peaceful rallies on the streets of Wan Chai district. Riot police chased down those who were slow to leave the rallies and made several arrests. At one point, about a hundred people were trapped and searched by the police in a passageway between Southorn Playground and an MTR station. The police divided the group up into three after completing their search and escorted them up police buses in supposed arrest. Among those taken away were a dozen teenage girls. Videos of the incident showed that those marched away by the police had numbers scribbled on the back of their hands.

4. A video of a Hong Kong firefighter getting into an argument with riot police before he was surrounded by them and pushed up against the wall of a nearby building was widely circulated on social media. According to some Hong Kong online forums, the firefighter was later arrested. On Nov. 3, the Hong Kong police and fire services department released a joint statement claiming that “there was misunderstanding in the verbal communication between both sides” and “the matter was tackled and resolved at the scene after further communication.”

Nov. 3
1. The Hong Kong Chief Executive Office released a statement announcing that Carrie Lam will meet with PRC vice premier Han Zheng “in the morning and afternoon” of Nov. 6, and later “attend the third plenary meeting of the Leading Group for the Development of the Guangdong-Hong Kong-Macao Greater Bay Area (Leading Group).”

2. Hong Kong riot police again stormed several shopping malls to arrest protesters. There was also a suspicious knife attack incident at one of the malls where a Mandarin-speaking man stabbed and injured five people and partially bit off the ear of a local councilor.

Our take:
1. The Fourth Plenum communiqué reveals that the CCP elite is preoccupied with strengthening “systems” and “governance” in the face of unprecedented crisis for the regime. Also, the communiqué makes no mention of the Hong Kong protests, but stresses the importance of the “one country, two systems” model and the governance of the Hong Kong special administrative region.

2. Many of the Hong Kong government’s moves, including the enacting of emergency law to ban face masks at gatherings, the application of a High Court interim injunction order, the early closing of train stations, and the Hong Kong police’s increasing abuse of their authority, have pernicious ramifications beyond the controversial extradition bill and even Article 23 of the Basic Law.

We believe that the Hong Kong government has already placed the city under de facto martial law.

3. We previously identified the CCP’s strategies and goals in its handling of the Hong Kong protests. How the CCP handles Hong Kong is guided by its need to survive and dominate: In the long-term, Hong Kong is a card to play when confronting the United States as the Sino-U.S. rivalry escalates; in the medium-term, the Hong Kong situation will affect the CCP’s ability to influence the 2020 Taiwan presidential election; and in the short-term, the CCP needs to shape the outcome of Hong Kong’s district council elections.

For communist regimes, commitments are merely tools of strategy; commitments do not have to be honored and can be easily made or broken if doing so advances strategic agendas. Hence, the CCP will “allow” the pro-establishment side to take action to meet the five demands and secure seats in the Legislative Council, but may not let them actually resolve some of the more critical demands, such as the implementation of genuine universal suffrage or conducting a truly independent inquiry into police conduct. Also, once pro-establishment lawmakers have been voted into office, they can use their control over the legislature to drag out the meeting of the five demands. Finally, the CCP’s willingness to offer “concessions” is tied with its progress in achieving its medium- and long-term goals; once its other goals are met, the CCP can find various ways to retract the “concessions.”

In considering the present situation with Taiwan, the United States, and internationally, the CCP could offer “shocking concessions” to the Hong Kong protesters before the year is out. The “concessions” could even “rehabilitate” the CCP’s international image and again make the “one country, two systems” model seem like a viable option, especially for Taiwan. If the CCP does make such “concessions,” however, it will also ramp up its internal and external propaganda work to ensure that the informational environment stays in its favor and avoid having to make “concessions” on the mainland to Chinese people sensing weakness on the CCP’s part and an opportunity for revolution.

4. In a scenario where the CCP “meets” the five demands but gauges that the move cannot grant the pro-establishment side a strong advantage at the polls, it could shift strategies and instead escalate chaos in the city to give the Hong Kong government an excuse to postpone the local elections. The CCP, however, will avoid this “lower strategy” where possible because it further discredits the “one country, two systems” model, weakens its ability to sway the 2020 Taiwan election, and greatly tarnishes the PRC’s international image.

5. We believe that the “second retirement” of former police deputy commissioner Alan Lau is a sign that the CCP is preparing to sacrifice the Hong Kong police force to meet its short-term goals in Hong Kong.

Lau, a veteran police officer who oversaw the heavy-handed suppression of the 2014 Umbrella Movement protests and the 2016 Mong Kok incident, returned to the force in August to “enhance strategic command and oversee public order events.” His stepping aside “ahead of schedule” suggests that the CCP recognizes that brute force alone has been unsuccessful in quelling the protests and that it needs to shift strategies if it is to meet its short, medium, and long-term goals.

6. The Hong Kong situation is particularly messy because there are many interests in play. While the CCP’s interests appear to dominate, it also faces challenges from other institutions with self-preservation issues. One of these institutions is the Hong Kong police force.

The Hong Kong police are already under scrutiny for their brutal suppression tactics and rampant abuse of authority. The only way in which the police ensure their self-preservation at this stage is through framing their actions as the “only viable option” which could be taken at the time. Hence, it is in the police’s interest to frame the protesters as “terrorists” to justify their heavy-handed actions and escape scrutiny.

From our observation, the Hong Kong police have recently begun taking extreme measures to humiliate and provoke the protesters and even regular passersby. It cannot be ruled out that one of the goals of police provocation is to trigger a “police killing” incident, then officially designate protesters as “terrorists” and gain a legitimate excuse to take even stronger measures to squash the “terrorist movement.” In this scenario, the protesters will likely lose the support of the United States (the Hong Kong Human Rights and Democracy Act of 2019 has yet to clear the U.S. Senate) and the international community; in his second China policy speech, U.S. Vice President Mike Pence had urged the Hong Kong people to “stay on the path of nonviolent protest.”