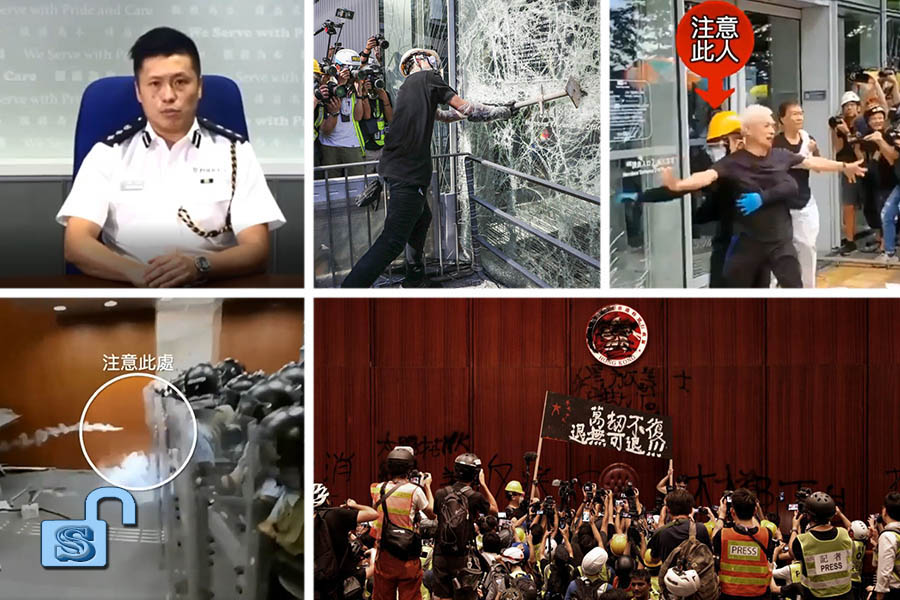 ◎ There are several questionable details about the legislature break-in incident.

On July 1, Hong Kong protesters broke into and vandalized the city’s Legislative Council. The break-in incident generated a lot of controversy because of what happened and how developments unfolded.

In the afternoon of July 1, about 550,000 people participated in an annual protest march to mark the anniversary of Hong Kong’s handover to the Chinese regime. The march also protested the extradition bill, called for the resignation of Hong Kong leader Carrie Lam, requested that Lam revoke her earlier designation of the mass demonstrations as a “riot,” and other extradition bill-related demands. The march was carried out peacefully and without incident.

After the break-in, 42 pro-establishment Hong Kong lawmakers issued a statement that strongly condemned the violence but made no mention of the police abandoning the defense of the legislature building. At about 9:30 p.m., Hong Kong Police Commissioner Stephen Lo Wai-chung condemned the “riot” in a video and announced that the police would move in to clear the protesters from the legislature building.

Near midnight, the police fired several rounds of tear gas to disperse nearly 1,000 protesters who had gathered around the legislature building. The police proceeded to set up roadblocks in the area to intercept and arrest demonstrators in the early hours of the morning.

At 4:00 a.m., Hong Kong leader Carrie Lam held a press conference to condemn the “violent and illegal behavior” of the protesters and announce that the matter would be “pursued to the end.” Mainland social media websites started spreading the news of a “violent riot at the legislature.” Most pro-Beijing Hong Kong newspapers ran a frontpage story condemning the “riot.” Official Chinese regime media outlets also condemned the legislature break-in as a “riot,” but avoided showing footage or images of the protest.

On July 3, the Hong Kong police made their first arrest in a citywide raid to track down the protesters involved in the legislature break-in.

The backdrop:
Since early June, millions of people in Hong Kong have taken to the streets to protest an extradition law proposed by the Hong Kong government. If passed, the extradition bill would put the people in the city, including those passing through, at risk of being arrested and sent to mainland China for trial. (For previous analysis of this topic, see here, here, and here.)

Our take:
1. There are several questionable details about the legislature break-in incident:

Many observers, including former Hong Kong police officers, questioned why the police suddenly withdrew from the scene just before the break-in and did nothing to prevent the incident from escalating.

Martin Lee, a pro-democracy former lawmaker, told BBC radio: “When the protesters entered, the police just suddenly dispersed. Have you ever seen this in any country in any city where an important building, like the Legislative Council building, was attacked and the police were actually present and they didn’t think to stop it to begin with?”

According to a Reuters report, former Royal Hong Kong Police Criminal Intelligence Bureau commander Steve Vickers said that the police tactics were “suspect” and that “it must always be remembered that in the unlikely event of the police being perceived as not holding the line, that the only alternative would be direct mainland intervention.”

In explaining the police withdrawal, Hong Kong Police Commissioner Stephen Lo claimed that some protesters had thrown “toxic powder” on his officers while others had sought to interfere with the electrical system. He argued that it would be difficult for his officers to resort to regular measures to disperse the protesters without the lights.

1.3. According to Hong Kong media reports and social media commentary, triad members were involved in the skirmishes on July 1 and had supported the police in an event on June 30.

1.4. The Hong Kong police released a video condemning the “riot” at 10:20 p.m. on its Facebook page. Social media users pointed out that the wristwatch of the police spokesman in the video read “5:05” and speculated that the video was pre-recorded, with the implication that the legislature break-in incident was likely premeditated. The police later tried to dispel the speculation by claiming that online images of the wristwatch were “photoshopped,” but social media users took the police refutation as a “clumsy denial that reveals the truth” (此地無銀三百兩).

1.5. The legislature break-in goes against the grain of the peaceful mass demonstrations in Hong Kong.

A million people marched in the streets of Hong Kong on June 9 and two million on June 16 without incident. On July 1, 550,000 took to the streets without controversy. Observers lauded the peacefulness and civility of the mass protests. Protesters young and old generally behaved in a civic-minded fashion, such as picking up their own trash after the demonstrations and creating room to allow public transport to pass through the packed roads. The protests forced Hong Kong chief executive Carrie Lam to indefinitely postpone the passing of the extradition law. It is inconceivable why a small group of protesters would suddenly depart from the successful peaceful stance and use violent methods that would tarnish the image of Hong Kong protesters.

2. Incitement is a favorite tactic of the Chinese Communist Party. With its involvement in student movements, revolutions, and violent class struggles, the Party has unparalleled experience in creating and using incitement to justify moving in to suppress “problematic” areas or groups. A common tactic is deploying agents to infiltrate groups, fracture the group and its cause, and provoke violence with the authorities to give the CCP a ready-made reason to launch a crackdown. The Tibetans, Uyghurs, protesters in Tiananmen Square, and retired military veteran protesters were all victims to CCP incitement tactics.

Given the various questionable developments on July 1 and July 2, we cannot rule out the possibility that CCP incitement tactics were deployed in the Hong Kong legislature break-in incident. Regardless of whether such tactics were used, the Hong Kong police now have an excuse to arrest the perpetrators of the legislature break-in and create a climate of fear in the city. Also, the Hong Kong government now has an excuse to deflect international criticism of its earlier violent suppression of protesters and use brutal force to suppress subsequent “riots.” Further, the Hong Kong society is being fragmented along those who prefer a more hardline approach and those who prefer a more peaceful way of confronting the Hong Kong government.

What’s next:
1. The Chinese regime will not easily let Carrie Lam step down to avoid giving hope to the Hong Kong people that their protests are working.

2. The CCP and pro-Beijing overseas media outlets will continue criticizing the “riots” in Hong Kong in an effort to smear the Hong Kong protests and provoke incitement.

3. Hong Kong society could fracture and the resistance could become polarized. A small number of desperate protesters could tend towards violence in what they feel is a “fight to the death” against the Hong Kong and Chinese authorities.

4. Present international pressure could have a limited impact on Hong Kong, at least in the short-term.

5. Factional fighting in the CCP will likely aggravate the situation in Hong Kong. Multiple contradictory signals could be released about the Hong Kong government and the Chinese regime’s attitude towards Hong Kong.