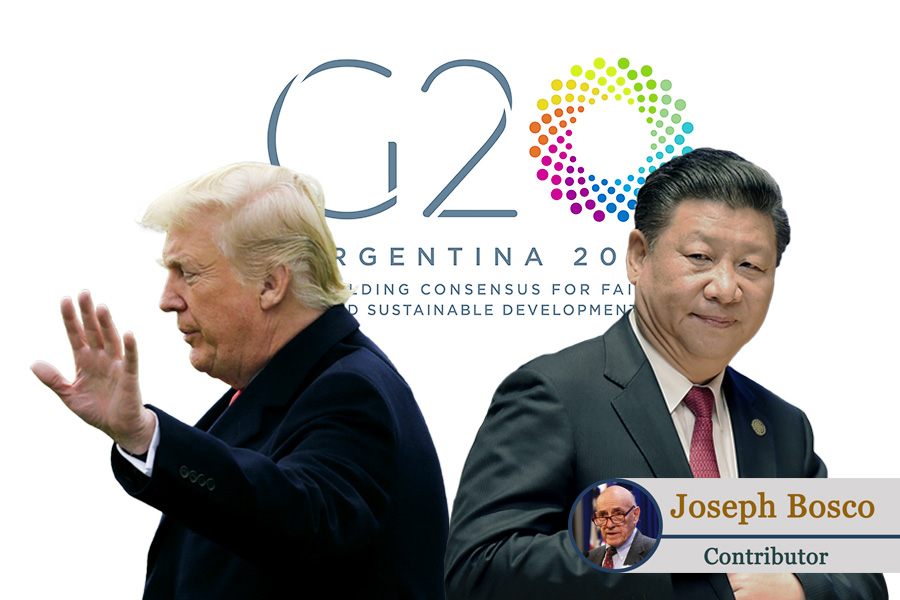 In the New China-US Cold War, Will Xi or Trump Blink First?

◎ Pence’s message to Beijing was firm and clear: “The United States … will not change course until China changes its ways.”

When Vice President Mike Pence addressed the recent Asia-Pacific Economic Summit, he criticized China for its myriad violations of international norms. America and the world have lost patience, he warned: “Things must change.”

He spoke these words 51 years after Richard Nixon issued the first urgent “China must change” message. In a Foreign Affairs article previewing the course he would follow in his historic opening to China, Nixon portrayed in stark terms the alternative course of history with an unchanged China:

“Taking the long view, we simply cannot afford to leave China forever outside the family of nations, there to nurture its fantasies, cherish its hates and threaten its neighbors.”

Integrating China into the international community, Nixon argued, would bring about reform in its economic and political systems. More importantly for the cause of regional and global peace, engagement was the only way to assure that a future China would moderate its innate hostility toward the West and let go of its historical grievances — real, imagined and contrived.

Every subsequent administration took measures to integrate China more fully in the international system, always with the same rationale: it will help China change for the better. Unfortunately, neither the Nixon administration nor any of its successors — until the Trump administration — bothered to assign any kind of normative metrics to judge how, or whether, China’s communist ideology was moderating its attitude toward either its own people or the outside world.

Instead, most China-watchers, in and out of government, focused on the dramatic openings in its economy and comfortably presumed that political reform and a more benign worldview inevitably would follow. Some who prospered as China rose did not fret about whether China was becoming a normal member of the family of nations, as long as business was good.

But Deng Xiaoping, author of the economic changes, brought the reality of the Chinese communist system crashing home long before Xi Jinping arrived on the scene. On June 4, 1989, the Great Reformer said no to the call for political change and turned the Chinese People’s Army against the Chinese people, slaughtering hundreds, if not thousands, who had shared optimistic assumptions about change.

In his message to the Communist Party in 1990, Deng provided an important clue to China’s future relationship with the West. Responding to the post-Tiananmen backlash and the collapse of Eastern Europe communist regimes, he advised his colleagues to “hide our capabilities and bide our time.” The line was much quoted in the West, but little attention was paid to its ominous meaning and important questions were rarely asked.

Why did China have to hide anything from the world, and was it hiding not only its capacities but also its intentions? Was this part of the Chinese tradition of political and diplomatic deception, perfected to a crude high art under its communist regime? And, most significantly, for what was Beijing biding its time? What would come next, when the time was right?

Since grasping power, Xi has provided answers to these questions — and they boil down to a truth that was there all along, since the creation of the People’s Republic of China: its perception that the West, led by the United States, is the mortal enemy. Despite the ups and downs with passing individual personalities, the waxing and waning of schools of communist thought and the vying among them, it all has been done within the framework of Mao Zedong’s interpretation of Marxism-Leninism: “Power comes from the barrel of a gun.”

The underlying, irreducible tenet of that ideology is that the economic and political systems of the West — rule of law, democracy, free expression — and the international institutions that have flowed from them are fundamentally incompatible, over the long run, with the party’s conception of how societies, and ultimately the world, are to be organized and governed.

The Trump administration has said goodbye to all that. Its intention to challenge Beijing’s hegemonic and expansionist initiatives were made clear in the National Security Strategy, the National Defense Strategy, and presidential statements and actions on trade, Taiwan, the South China Sea and North Korea. In his groundbreaking talk last month, the vice president captured the essence of the administration’s fresh thinking when he said China has been waging “a new Cold War” against the United States.

With his follow-on speeches in Asia last week, Pence signaled that America’s new China policy will not be transactional, transitory, or temporary — as he, the president, and other administration officials have stated, the U.S. commitment to challenge China’s hostility and deception will be sustained over the long term.

And he emphasized the issue is far larger than the fate of a man-made island in the South China Sea or the level of bilateral trade. It is about America’s core national interests. While China likes to remind us of its red lines, it needs to be reminded that America has what might be called our red, white and blue lines — and crossing them is no longer advisable in China’s own interest.

Pence’s message to Beijing was firm and clear: “The United States … will not change course until China changes its ways.” That resolve is about to be tested when Trump meets Xi for trade talks at the G20 conference in Argentina. Will personal chemistry, real or feigned, and the allure of a “successful” short-term deal once again allow Beijing to slip loose from accountability for its lawless actions? The future of U.S.-China relations is in the hands of President Trump.

He has yet to play his ultimate card: the need for either change in China’s policies, or a change of the regime. As Pence said, “[The] story of progress in the Indo-Pacific [is that] dictatorships have fallen and democracies have risen in their place.”