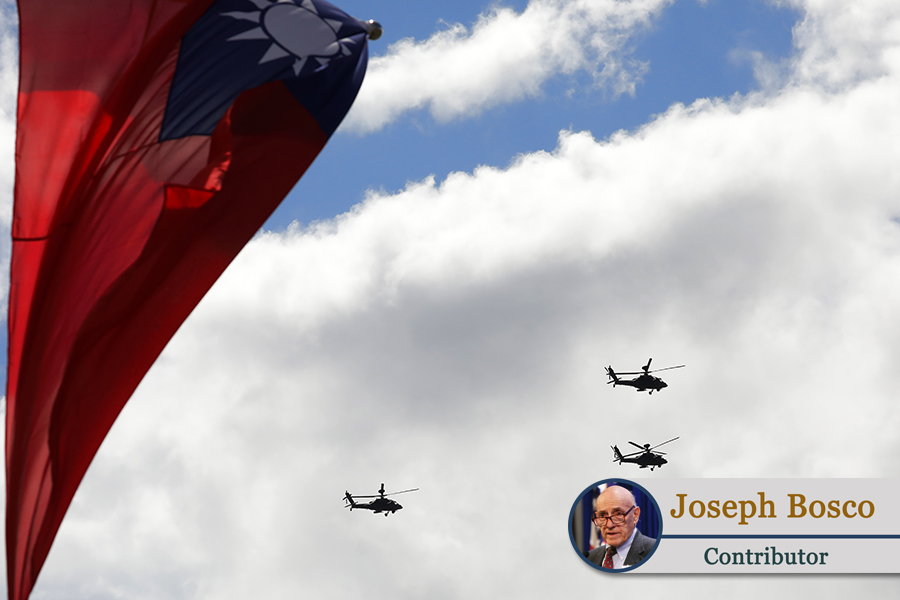 Scrap the Third Communique With China, Keep the Six Assurances to Taiwan

◎ President Donald Trump has not hesitated to tear up international commitments made by his predecessors if he determines they are not in America’s national interest.

President Donald Trump has not hesitated to tear up international commitments made by his predecessors if he determines they are not in America’s national interest. That was the fate of the Paris Climate Accord, the Global Migration Accord, North American Free Trade Agreement (NAFTA), the U.S.-Korea trade agreement, the Joint Comprehensive Plan of Action (JCPOA), Trans-Pacific Partnership (TPP), (Iran) Treaty of Amity, the recent opening of Cuba relations, and the long-established recognition of Tel Aviv as Israel’s capital.

As it happens, all those canceled deals were consummated by Democratic presidents. Now, however, Trump would do well to scrap a badly flawed document that was mistakenly signed by a Republican — Ronald Reagan.

That agreement is the U.S.-China joint communique executed by Reagan and Zhao Ziyang on Aug. 17, 1982, known as the Third Communique.

It followed the Shanghai Communique that Richard Nixon and Zhou Enlai signed on Feb.  27, 1972, to open informal relations, and the communique of diplomatic recognition executed by Jimmy Carter and Deng Xiaoping on Jan. 1, 1979.

Those prior breaks with longstanding U.S. policy, far more momentous than any of today’s controversial Trump reversals, had already severely disadvantaged Taiwan and set China and the United States on the long-term course to the potential conflict now looming.

The Third Communique made a bad situation even worse, but for Beijing it was a diplomatic bonanza. It furthered the sense that, after the Nixon-Carter actions, momentum was moving inexorably in China’s direction and away from Taiwan.

It accomplished what Beijing had been pressing for since the earlier two communiques: imposition of a ceiling on U.S. arms sales to Taiwan and Washington’s commitment to gradually eliminate them.

What makes the communique so astonishing is that it occurred less than three years after Congress had overwhelmingly passed the Taiwan Relations Act (TRA) mandating that the United States provide Taiwan with “a sufficient self-defense capability.” The TRA was an angry and instantaneous reaction to Carter’s rupture of diplomatic and military relations with the Republic of China.

Yet, here was Reagan who, during his 1980 campaign, had criticized Carter’s treatment of Taiwan and pledged to enforce the TRA — in effect, undoing Congress’s repudiation of Carter. The man who fervently opposed Chinese communists now was giving them what they wanted on Taiwan. How did this happen?

Henry Kissinger, who was in a position to know, says in his book, “On China,” that it was the work of his former deputy, Alexander Haig, now secretary of State himself under Reagan. Consistent with his campaign positions, “Reagan made no secret of his wish that some arms sales to Taiwan go forward …  Haig had a contrary view.” After complicated and confusing negotiations with China — and with the president — Haig produced the infamous Third Communique.

When conservative and liberal supporters of Taiwan in Congress and the media expressed their dismay, Reagan immediately disavowed his own communique. According to Kissinger, he admonished the National Review’s editor: “You can tell your friends there I have not changed my mind one damn bit about Taiwan. Whatever weapons they need to defend themselves against attacks or invasion by Red China, they will get from the United States.”

To repair the damage inflicted and reassure Taiwan, Reagan directed his staff to accept an earlier Taipei proposal to guide U.S.-Taiwan relations.

Known as the Six Assurances, it provided that Washington would not (1) set a date for termination of arms sales, (2) amend the TRA, (3) consult with China regarding U.S. arms sales, (4) mediate between Taiwan and China, (5) alter its position that Taiwan’s future be decided peacefully between the parties, or pressure Taiwan to negotiate, or (6) recognize Chinese sovereignty over Taiwan.

Kissinger notes that the Third Communique “has become part of the basic architecture of the U.S.-China relationship, regularly reaffirmed as part of the sacramental language of subsequent high-level dialogues and joint communiques.”

In Vice President Mike Pence’s recent speech on the Trump administration’s updated China policy, there it was again, the official genuflection to the Three Communiques.

Kissinger finds it “odd that the Third Communique should have achieved such a status together with the Shanghai Communique of Nixon’s visit and the normalization agreement of the Carter period.” Why? Because, he observes, “The communique is quite ambiguous, hence a difficult roadmap for the future.” This from the self-described grandmaster of diplomatic ambiguity.

Actually, President Trump needs to cancel the communique for the opposite reason: it is far too specific in two respects. It purports to regulate the level and duration of U.S. arms sales to Taiwan. True, the Six Assurances go a long way toward nullifying that intended Chinese veto. But the fact that the document is still constantly invoked gives Beijing ongoing leverage over Washington and operates as a psychological constraint on many U.S. policymakers. Beijing points to the communique, accuses Washington (accurately) of noncompliance, and, keeping America on the defensive, demands concessions or indulgence elsewhere.

Further, the communique rigidly circumscribes U.S. policy options regarding Taiwan’s future. It says the United States “reiterates that it has no intention of infringing on Chinese sovereignty and territorial integrity, or interfering in China’s internal affairs, or pursuing a policy of `two Chinas’ or ‘one China, one Taiwan.’”

The language is taken verbatim from the Chinese side’s statement in the Shanghai Communique.  U.S. negotiators never adopted it there or in the second communique. But here it is, stated in the Third Communique as the position of both sides.

Yet, it conflicts with Washington’s stated agnosticism on Taiwan’s future because the United States has never conceded that Taiwan is part of China’s “sovereignty,” “territorial integrity,” or “internal affairs.” If Washington one day decides to take a new position and recognize “two Chinas” or, more likely, “one China, one Taiwan,” it would do so without violating those principles as the United States and Taiwan see them.

Beijing, of course, would protest mightily over such a change in U.S. policy, but there is a ready response to its moral outrage: From the beginning, China has violated Washington’s rock-bottom position in all three communiques and in every policy statement over the past 46 years — that Taiwan’s fate must be settled peacefully.

China accepts that concept only as a convenient aspirational path to unification, not to any other outcome. On the contrary, it has deployed an arsenal of 1,600 ballistic missiles targeting Taiwan, fired some toward the island in 1995-96, declared in the 2005 Anti-Secession Law its intention to attack Taiwan for refusing to capitulate, and escalated its aggressive maritime and aviation maneuvers around Taiwan.

Washington’s decision on recognition is in the future. But the rationale of Chinese Communist Party’s bad faith and threats of force equally applies now for casting the anachronistic Third Communique into the dustbin of history. The Six Assurances, however, even without the communique, should remain as important American guiding principles.