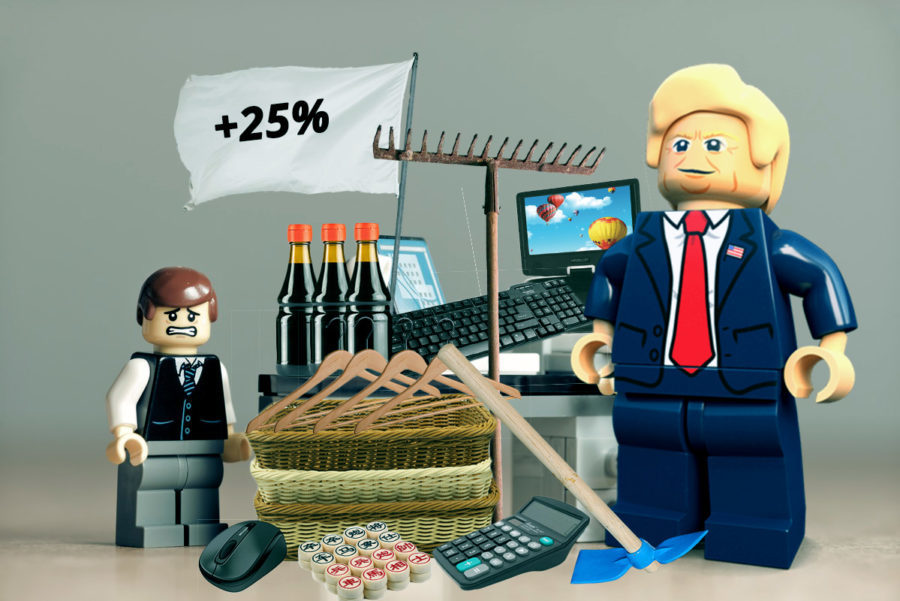 ◎ The CCP is putting on a show for the Chinese people with its retaliatory duties.

In response to the United States plan to levy 25 percent tariffs on $200 billion of Chinese goods, China’s Ministry of Commerce announced $60 billion of tariffs on 5,207 items of American goods on Aug. 3. The tariffs range in rates from 5 percent to 25 percent.

Previously, the Chinese Communist Party (CCP) vowed to retaliate to U.S. tariffs with “qualitative and quantitative” measures. We examined the Chinese tariff list, and it seems that the CCP is not seriously fighting back, but secretly waving the white flag at America.

Aug. 2: The Office of the United States Trade Representative (USTR) announced that the U.S. would be increasing the tariff rate on $200 billion worth of Chinese goods from 10 percent to 25 percent.

Aug. 3: After meeting with U.S. Secretary of State Mike Pompeo, Chinese foreign minister Wang Yi said they were “identical” in their understanding of the “general direction” of trade discussions. “We are willing to resolve the concerns of both sides via talks on the basis of an equal footing and mutual respect. He (Pompeo) was accommodating on this as a direction, and said that he does not want current frictions to continue,” Wang said.

The big picture:
China’s stock markets and foreign exchange markets have plummeted following the outbreak of the Sino-U.S. trade dispute in March. Since U.S. President Donald Trump signed the presidential memorandum targeting China’s intellectual property theft and forced technology transfers on March 22 until Aug. 7, the Shanghai Stock Exchange has fallen by 15.29 percent and the Shenzhen Stock Exchange by 21.01 percent. In the same period, both stock exchanges have lost 8.2 trillion yuan ($1.2 trillion) of market value.

Meanwhile, the renminbi exchange rate to the dollar has breached the 6.9 level, and the markets expect the currency to fall below the 7 mark this year.

Further, peer-to-peer lending platforms (P2P) in China have been failing one after the other in the first half of 2018. On Aug. 6, Beijing increased police presence in its financial district and near the China Banking and Insurance Regulatory Commission to disperse crowds of self-described “financial refugees,” or P2P investors who suffered after the lending platforms collapsed or refused to make payments.

Our take:
1. Going by the tariff list, we believe that the CCP is putting on a show for the Chinese people with its retaliatory duties. As we previously analyzed, the CCP has to resort to posturing to upkeep its “strong country” image.

2. The CCP’s tariff list is vastly inferior to the $200 billion of American tariffs in total amount and rates. The Ministry of Commerce also did not say when the tariffs would go into effect. Further, the U.S. goods being hit with tariffs seem like the sort of products that China would have exported to the U.S. several decades ago.

Items like tea leaves, bamboo, soy sauce, and coconut juice are specialty products of China. Ditto items like plastic, wooden, bamboo, and straw products, which are prevalent at the annual China Import and Export Fair in Guangzhou. Further, items like silk products and knitted clothing are labor-intensive commodities that are widely manufactured in China, not the U.S.

3. The CCP vowed to hit the U.S. with “qualitative and quantitative” measures after the USTR announced the $200 billion of tariffs. “Qualitative and quantitative” retaliation should be actions like substantially raising tariffs on American products like soybeans, airplanes, and auto exports, and not levying 25 percent tariffs on “Made in USA” Chinese checkers, staples, and cast iron bathtubs.

It remains to be seen if Beijing will really target Apple to gain “bargaining chips” as a state media commentary hinted, or if it is more empty posturing. The $60 billion tariff list suggests that the latter outcome is the more likely.

4. We believe that the CCP’s tariff list, which goes after items that the U.S. has no export advantage or does not manufacture, indicates that it dares not go head-on with America in a trade war. Indeed, the tariffs are less a throw down of the gauntlet than a white flag by the CCP, and could be its way of engaging in “ni dong de” (“you do know,” or inside baseball) signaling to Washington.

What’s next:
With China’s economy steadily worsening and social problems threatening Party rule, the CCP would definitely seek out ways to negotiate with America. If the U.S. is unprepared to deal immediately with the consequences of CCP collapse, it could be amenable to hearing out Beijing.