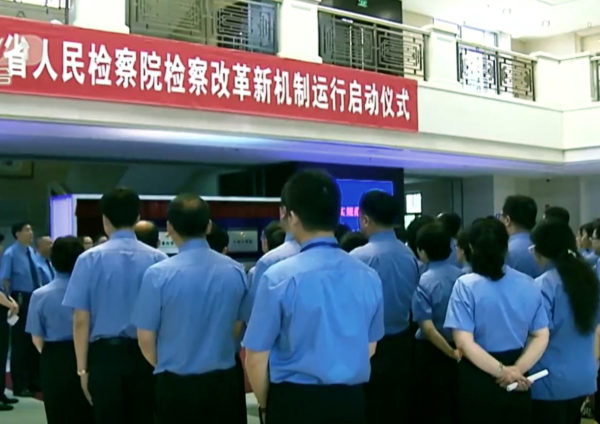 Procuratorates in 19 provincial-level administrations, including Beijing, Tianjin, and Shanxi, will now manage the manpower, finances, and assets of all lower-level procuratorates in their respective province, according to an official announcement on March 9.

The “unified the management of personnel, funds, and properties” will see the 19 provincial procuratorates determine the yearly budget for basic procuratorates, including assigning funding for salaries, the handling of cases, and office expenses.

The backdrop:
The 18th Central Committee decided at its Third Plenum in November 2013 that local courts and procuratorates at the provincial-level and below should have “unified management of personnel, funds, and properties.” The goal of this reform is to achieve “delocalization of judicial powers.”

Before the reforms, control over manpower, finances, and assets of local courts and procuratorates came under the purview of their local government in a horizontal hierarchy. For instance, a county administration’s Organization Department would make judicial appointments for county courts and procuratorates, while its financial department would determine the available budget and funding for the legal apparatuses. In other words, local governments had firm control over judicial personnel and its operations.

Given the horizontal hierarchical set up, grassroots judicial apparatuses were subjected to the whims of local governments. This was an important reason for the high incidence of institutional corruption in the local judiciary as power local Party officials sought to swing the verdict of sensitive cases in their favor.

Our take:
1. Xi Jinping’s various judicial reforms (“constitutional dream,” National Supervision Commission, correcting miscarriages of justice, etc.) and his strengthening the Party’s leadership are aimed at weakening the power of local governments and strengthening the central government’s control over the provinces.

2. After the Two Sessions, the Chinese regime’s supervisory (National Supervision Commission and Central Commission for Discipline Inspection) and judicial organs (courts and procuratorates) will either utilize or have transitioned to a vertical hierarchy of control, i.e., grassroots branches report directly to their provincial units, who then report to the central government. When the reforms are fully implemented, the power of the Political and Legal Affairs Commission (PLAC), a small but powerful Party organ that coordinates the courts, procuratorates, and security apparatus, will be weakened to a point where it becomes virtually redundant. We believe that the PLAC could very possibly be scrapped as part of Party and state institutional reform this year.

3. The current PLAC chief is Guo Shengkun, who is associated with the Jiang Zemin faction. Guo appeared to gain more power at the 19th Party Congress when he was promoted from Minister of Public Security to PLAC boss. If the PLAC is disbanded, however, then Guo and the Jiang faction would have instead been tripped up by Xi’s schemes.