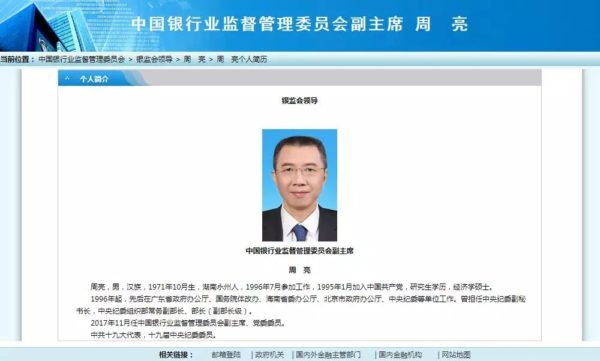 ◎ The appointment of Wang’s trusted aide to a top position in China’s banking regulator confirms our analysis that Xi is focusing his anti-corruption efforts on the financial sector.

Zhou, a Chinese official born in the 1970s, was previously the director of the Central Commission for Discipline Inspection (CCDI) Organization Department. He also served as Wang Qishan’s aide (mishu) for about 20 years.

The big picture: Zhou’s appointment brings the CBRC leadership to its full complement of one chairman and four vice chairs. Only the spot of assistant to the chairman is vacant. Four of the seven CBRC leaders were appointed this year.

Li Xinran, the head of the discipline inspection group stationed in the CBRC and one of the regulator’s top leaders, is also an associate of Wang Qishan. Li moved to the CBRC in September from the CCDI’s seventh inspection unit.

Our take: We earlier observed that Xi Jinping is focusing his anti-corruption efforts on the financial sector. The appointment of Wang’s trusted aide to a top position in China’s banking regulator confirms our analysis.

Wang appears to still have significant political influence, seeing how his associates are securing top positions. We wrote in October that Wang may serve as an “unofficial” Politburo Standing Committee member, and may even be appointed vice president. Our analysis was corroborated by a recent South China Morning Post report about Wang’s continued attendance of Politburo Standing Committee meetings as a “non-voting member” and the expectation that he will be named as vice-president at the Two Sessions meeting in March.