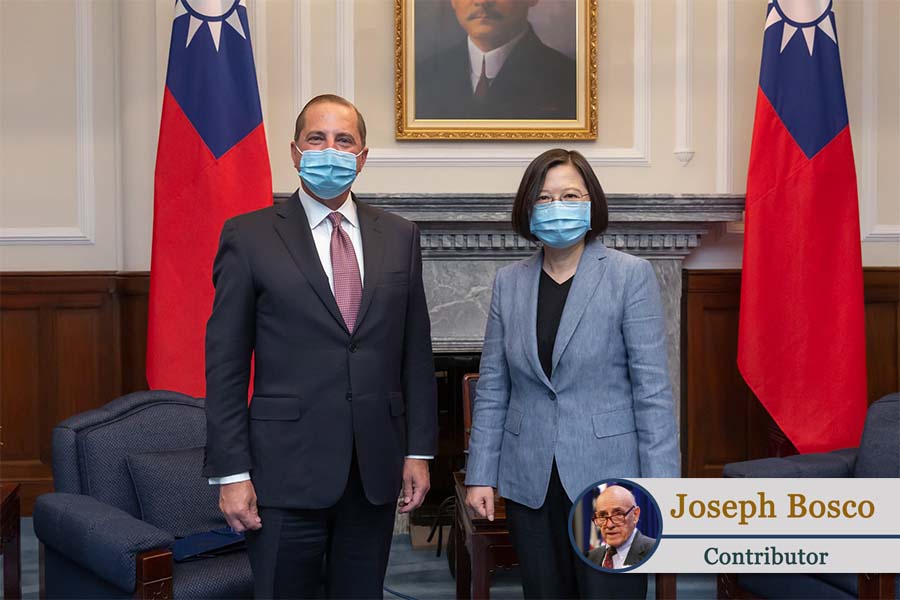 ◎ The Trump administration has taken the next step in responding to Communist China’s assault against the people of Hong Kong and their democratic aspirations.

The Trump administration has taken the next step in responding to Communist China’s assault against the people of Hong Kong and their democratic aspirations. Last week, it imposed sanctions on Hong Kong Chief Executive Carrie Lam and several other Hong Kong and Chinese officials. It has not yet exercised the full range of punitive options available under the Hong Kong Democracy and Human Rights Act that Congress passed and President Trump signed this year.

But Secretary of State Mike Pompeo’s expanding focus on Hong Kong and other human rights outrages by Beijing, and his call for other countries to join the effort, continue to provide hope to the multiple victims of Chinese communism that the free world has not forgotten them.

The Trump administration is also shoring up Taiwan’s international status to deter any similar aggression by Beijing against that democratic society.

Health and Human Services Director Alex Azar is visiting Taipei this week to discuss with Taiwan officials its exemplary record of preparing for and coping with the coronavirus pandemic. The highest-ranking U.S. official to visit Taiwan since 1979, Azar symbolizes the Trump administration’s commitment to closer U.S.-Taiwan relations despite Beijing’s threats.  The visit faithfully implements Congress’s intent when it passed the Taiwan Travel Act (TTA) that became law last year.

The TTA and other bipartisan congressional actions approved by the president demonstrate in both symbolic and concrete ways America’s commitment to the democratic security of Taiwan. The administration’s approval of weapons sales long held back by the Obama administration will enhance Taiwan’s self-defense capabilities as required by the 1979 Taiwan Relations Act.

In addition, the Trump national security team has lifted some restrictions on Taiwan’s forward defense activities, as evidenced by its deployment of 200 Taiwanese marines to the Pratas Islands in the South China Sea. Commenting on expanded U.S. cooperation with Taiwan under the Trump administration, Wang Ting-yu, from the legislature’s foreign affairs and national defense committee, noted, “The U.S. used to condemn Taiwan if we posted the military on the Pratas and Taiping” but concurred with the deployment this time.

All these self-defense enhancement measures are certainly essential. By themselves, however, they can only incrementally strengthen Taiwan’s ability to defend against a full-fledged attack from the vastly larger naval, air and missile forces of the People’s Liberation Army.

The only way Beijing can be indefinitely deterred from military adventurism against Taiwan is by the certainty of American intervention. China needs to be convinced that war against Taiwan would mean war against the United States, which would destroy the economic development China has built over decades.

So far, China’s leaders and military planners are not certain they would have to face that suicidal outcome, which is why they continue preparations to attack Taiwan and to deter Washington’s intervention. If shooting does start, China’s planning is based on the expectation that Washington will blink first and rush to one of its strategic off-ramps to prevent the situation from escalating. Beijing’s default position in the past has been that the U.S., as the mature, responsible party, can be relied on to make concessions to deescalate a crisis.

The conviction of Chinese leaders that in the end the United States will not come to Taiwan’s defense was made clear again by a statement about the Azar visit in the Global Times, a Chinese Communist Party (CCP) propaganda outlet: “The mainland has many cards, including the military card. More importantly, it is much more determined to play the cards than Washington.”

That is Beijing’s thinking in a nutshell: convince U.S. leaders and the American public that China is more committed to taking Taiwan than Washington is to defending it. It’s the message about “core interests,” “red lines” and “Chinese sovereignty” that the CCP has been repeating for seven decades until it becomes accepted in the West and in China as holy writ — and theoretically, leaves no room for Beijing to back down from its extreme positions. Yet, in conversations with Americans, many Chinese indicate they do not share that view, instead seeing Taiwan as a democratic model to be emulated, not an enemy to be crushed.

Under prior administrations, China’s political and military leaders perceived a dwindling U.S. commitment to come to Taiwan’s defense. While continuing to push the envelope with provocative rhetoric and actions, they held back from an outright military attack. But they have never stopped building the capacity that they expect will tip the psychological balance against U.S. intervention and enable a relatively low-risk aggressive move.

The Trump administration seems to have given Xi Jinping and his colleagues some pause on the advisability of moving too close to kinetic action. America’s anti-China mood has intensified with China’s reckless spread of the coronavirus pandemic to the world. The president himself, after giving Xi a pass on his deceptive handling of the virus, has repeatedly stressed its China origin and reportedly said in April that he was “getting tired of China.”

Actually, Xi already had concluded he was done with Trump once he realized Trump was serious about forcing the structural changes in China’s economy needed to comply with the trade deal.  We may never know whether the pandemic’s devastation of Western economies was a fortuitous coincidence for China or something more sinister. But the intelligence community confirmed this week what has been clear for months — that Beijing would like to see the “unpredictable” Trump gone and would be pleased to deal instead with Joe Biden as president.

Deng Xiaoping famously told his generation of Chinese leaders that while China was building its economic and military power it was prudent to keep a low profile to conceal their true intentions: “Hide your capabilities, bide your time.”

Xi has passed the point of coyness about what China believes it can do to the U.S. Navy if it intervenes in a cross-Strait conflict. But, given the strong pushback from the Trump administration on Taiwan and a range of issues, he apparently has decided China should bide its time a little longer and wait for Biden.