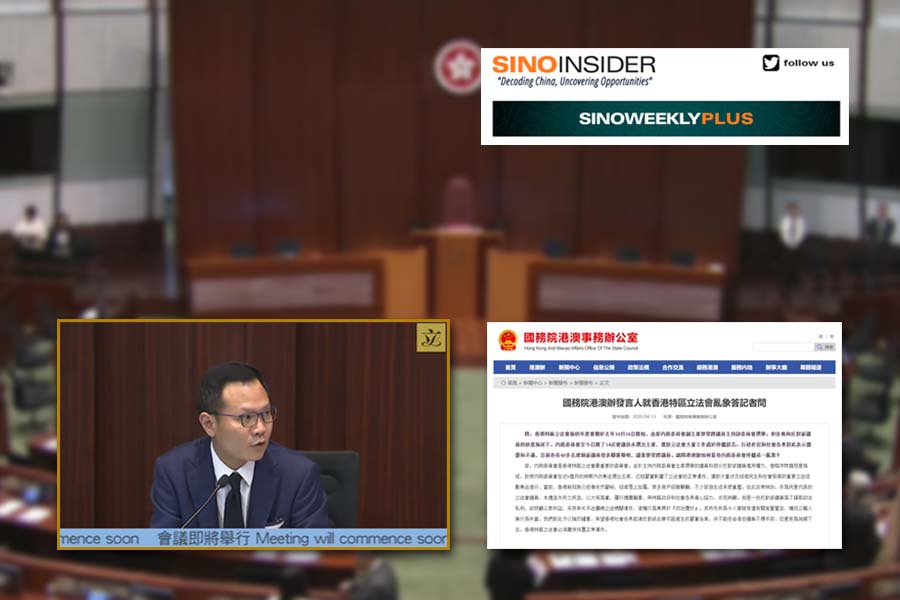 Risk Watch: What the CCP’s Push for Article 23 in Hong Kong Entails

◎ The following analysis was first published in the April 16 edition of our subscriber-only SinoWeekly Plus newsletter. Subscribe to SinoInsider to view past analyses in our newsletter archive.

Tensions in Hong Kong have reignited with the CCP again taking steps to interfere in Hong Kong affairs and moving personnel in the PRC’s Hong Kong apparatus.

“One can’t help thinking their behavior amounts to a breach of the [LegCo] oath, and constitutes an offense of misconduct in public office,” read the HKMAO statement.

The HKMAO named one pan-democrat lawmaker, Dennis Kwok of Hong Kong’s Civic Party, and accused him of abusing his power to interfere with the LegCo’s internal proceedings and causing delays in reviewing legislation.

April 14
Tam Yiu-chung, a Hong Kong member of the PRC National People’s Congress Standing Committee, said in an interview with Hong Kong media that lawmakers who do not perform their duties and do not display enough loyalty should be disqualified as legislators.

Tam’s remarks were widely interpreted as confirmation that the HKMAO and Hong Kong Liaison Office were using all means possible to prevent pan-democrat lawmakers from leading the LegCo.

***
In an exclusive interview with Reuters, senior judges say that “the independence of Hong Kong’s judicial system is under assault from the Communist Party leadership in Beijing.”

“If the ant-hill eroding the rule of law is not cleared, the dam of national security will be destroyed and the wellbeing of all Hong Kong residents will be damaged. There’s a need to put effort into maintaining the national security legal system and enforcement system as soon as possible,” Luo said during a speech to mark the PRC’s National Security Education Day.

Hours after Luo’s speech, the PRC State Council announced that Yang Jian, deputy director of the Hong Kong Liaison Office, had been removed from his post. The announcement did not reveal any details about Yang’s next job post.

“Extremist actions that are close to terrorism emerged, including home-made bombs, possession of firearms and attacks on police officers,” she said. Lam also censured people for spreading “cold-blooded and hate speech” on social media. “It’s possible that the national security would be threatened if these illegal acts are not effectively curbed,” she said.

Our take:
1. The removal of Yang Jian and his career trajectory will offer insights into the state of the CCP factional struggle.

Before being appointed deputy director of the Hong Kong Liaison Office in 2013, Yang held senior positions in propaganda and state media in Jiangxi Province and Guangdong Province. From 2000 to 2007, Yang served as president and Party Secretary of the Xinhua News Agency branch in Guangdong. From 2007 to 2013, Yang was deputy head of the provincial propaganda department and the National Radio and Television Administration in Guangdong. Yang Jian’s stint as a senior provincial propaganda official coincided with the period (2000 to 2012) where the propaganda and public security apparatuses were favored by the Jiang Zemin faction-dominated CCP regime; both apparatuses were essential for Jiang’s persecution campaign against Falun Gong. The high-level propaganda posts Yang held in Guangdong suggests that he at least has the Jiang faction’s trust. However, his slow career progression also indicates that he might not have been a Jiang faction associate or member.

From the perspective of CCP operations, if Yang Jian is not appointed to another position after leaving Hong Kong or gets a demotion, then he is almost certainly being punished for the Hong Kong Liaison Office’s failure to sway and gauge the ground sentiment during the anti-extradition bill protests and local district council elections last year. If Yang is transferred to another post of the same level, then the CCP could be giving him a “soft landing” for his failures; propaganda and media work was part of Yang’s portfolio at the Hong Kong Liaison Office. If Yang were to receive a promotion, then it would appear that the CCP does not wish to hold him accountable for its failures in Hong Kong.

From the perspective of the CCP factional struggle, if Yang fails to secure another post after Hong Kong, receives a demotion, or gets transferred to another post at the same level, then it would indicate that Xi Jinping is continuing to clear out the Hong Kong and Macau apparatus of Jiang-era officials. If Yang gets promoted, however, then it would seem that the Jiang faction’s influence over Hong Kong affairs has not waned and Xi lacks political strength to move against his political rivals.

2. From the statements issued by the HKMAO and the Hong Kong Liaison Office, as well as the remarks on “maintaining national security” by Liaison Office head Luo Huining, it is clear that the CCP wants to remove obstacles to enacting Article 23 in Hong Kong. The CCP wants Article 23 to be enacted “as soon as possible” to tighten its grip over the international financial hub, make it impossible for Hong Kong residents to carry out mass protests, and fast-forward the integration of Hong Kong into the Chinese regime ahead of the expiration of the “one country, two systems” arrangement in 2047.

Hong Kong residents, however, will unlikely allow the CCP a “free pass” to manipulate legislative and judicial affairs in the city. We believe that protests and turmoil could break out in Hong Kong as early as May. The Hong Kong government will likely cite the coronavirus epidemic as a reason to stop the Hong Kong people from assembling in public areas to protest. The Hong Kong people, however, showed that they can be very creative and determined when it comes to protesting during the anti-extradition bill demonstrations in 2019. Meanwhile, the Hong Kong government and police would have reservations about repeating the brutal suppression strategies used during the anti-extradition protests given the passage of the Hong Kong Human Rights and Democracy Act of 2019 by the United States last November.

Novel protests in Hong Kong will likely cause even more headaches for the Hong Kong government and heap pressure on the CCP regime at a time when it is already facing several regime-ending crises.