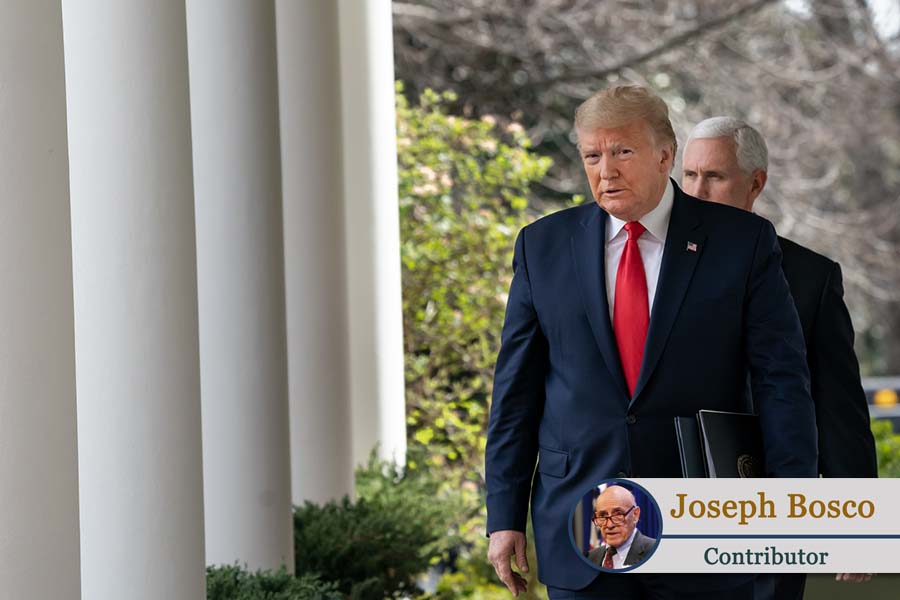 ◎ America is confronting a multidimensional and existential challenge from Communist China and must respond not only with economic, military and other national security means, but also on the ideological level.

President Trump says America is fighting a war on “an invisible enemy — the war is against the virus, that’s the war.” He sees himself as “a wartime president,” implicitly invoking the image of Franklin Roosevelt during World War II or perhaps George W. Bush after 9/11.

War is an apt description of the national mobilization effort being waged against the coronavirus pandemic by the president, governors, local officials and the nation’s public health community.

But the outbreak has dramatized that the United States and the Western world are under attack by an adversary that is actually quite visible. The People’s Republic of China, with reckless disregard for the consequences, initially refused to take the necessary actions to halt the outbreak of COVID-19 affecting its own population, then its Asian neighbors, and finally the rest of the world.

The unresolved question for now is whether the global spread of the virus resulted exclusively from the ruling Communist Party’s incompetence, stubborn bureaucratic rigidity, and inclination to evade the truth, qualities it displayed in previous epidemics.

Further intelligence work over time may reveal a possible connection to other contemporaneous facts. Wuhan, the epicenter of the outbreak, also happens to be the location of at least two Chinese government biomedical research laboratories. One was established by Professor Charles Lieber, an American who heads Harvard’s Chemistry and Chemical Biology Department. Lieber, who funded the project with a U.S. grant, recently was indicted by the Justice Department for hiding his China connections.

At the same time, two Chinese academics were arrested in Boston, one for violating U.S. law by not disclosing her involvement with the Chinese government, and the other for stealing 21 vials of biological materials and attempting to smuggle them to China.

Even if those criminal deceptions and thefts of intellectual property are purely coincidental and unrelated to the pandemic, they reflect the Cold War strategy China has been waging against the United States for decades, which is finally getting the attention it demands.

In the 1940s, Winston Churchill called on the Free World to muster its resolution in the war against the Nazis and Fascists in Europe. In this era’s existential confrontation with China, Trump has been the first president to demonstrate that kind of resolve — on the economic and trade front, on Taiwan, and on China’s maritime aggression in the South China Sea. His administration also has taken unprecedented action on human rights, journalistic freedom and diplomatic reciprocity.

Yet, while Trump’s national security team has had significant success in several arenas of contention with Beijing, his instinctual application of Churchill’s “magnanimity in victory” principle is premature and misdirected.

Even before the economic effects of the pandemic, Beijing had a long way to go in making the structural domestic changes the president has demanded to achieve fair trade and transparent economic relations. It has reneged on commitments on intellectual property theft and in other areas. Its aggression against Taiwan and in the South China Sea has escalated.

Trump maintains that he has good personal chemistry with Chinese leader Xi Jinping and praises his leadership. Xi never publicly reciprocates the compliments, keeping his focus on America as Communist China’s prime adversary. The president even gave China a pass for undermining sanctions against North Korea, whose nuclear and missile programs increasingly threaten the United States and its allies. (Similarly, he excuses Kim Jong Un for his ongoing missile tests, and absolved him of responsibility for his regime’s torture and murder of Otto Warmbier.)

After initially praising Xi for “working very hard” and acting responsibly to contain the outbreak, Trump has come around to “wishing” that China had been more forthcoming much earlier about its spread so that other countries could have prepared their defenses more effectively. What triggered Trump’s criticism was China’s disinformation campaign blatantly suggesting that the virus started not in Wuhan, China, but elsewhere, possibly even with the U.S. Army.

“As you know China tried to say at one point — maybe they stopped now — that it was caused by American soldiers,” Trump told reporters on March 18. “That can’t happen. It’s not going to happen, not as long as I’m president. It comes from China.”

He retaliated against the slander by referring repeatedly to the “Chinese virus,” which immediately invited cries of racism and reports that Asian Americans were being targeted for verbal and even physical abuse. In his Monday news conference, Trump avoided the term, saying at one point that the virus came from “somewhere,” though he eventually mentioned that China was the original source.

The entire pandemic experience seems to have reinforced what the president knows intuitively and what his National Defense Strategy lays out in national security prose. America is confronting a multidimensional and existential challenge from Communist China and must respond not only with economic, military and other national security means, but also on the ideological level, even if Trump would spurn that term.

For the rest of the world, the global crisis that China has created has starkly confirmed what most already know or fear about its government — that it is, at best, politically corrupt and untrustworthy, and at worst, brutally inhumane and aggressive in its intentions. This awareness provides a historic opportunity for Washington to undertake a Cold War-level information campaign, both within and outside China, to demand fundamental political reform. As was done regarding Taiwan and in South Korea, the process can be accomplished peacefully and incrementally but inexorably, leading to full democratization.

When China is finally on that path, which it has falsely promised under four decades of engagement, the president can claim “a very, very powerful victory over the virus” — that is, the political malady of Chinese Communism. Then, in the spirit of both Churchill and Franklin Roosevelt, he can show American magnanimity to the liberated Chinese people.