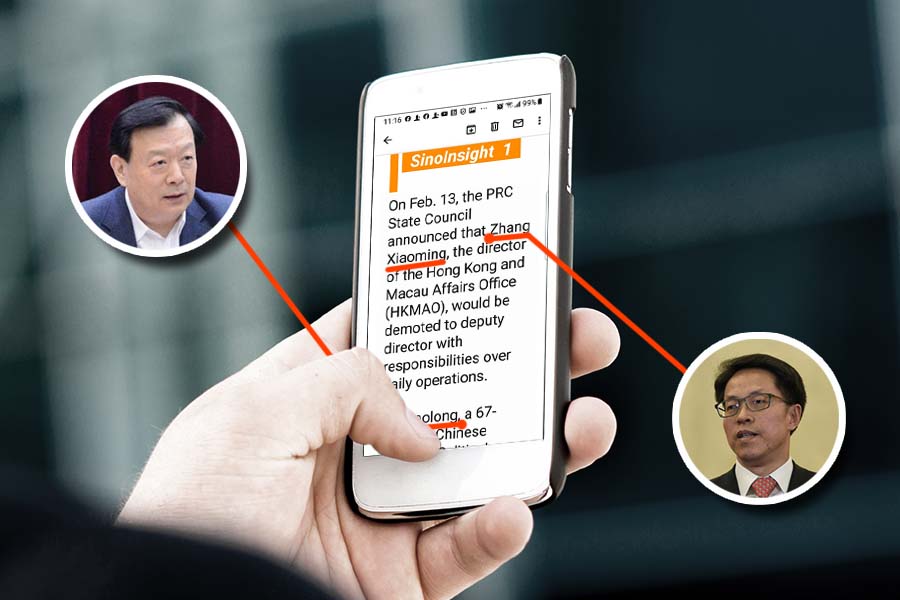 ◎ The following analysis was first published in the Feb. 13 edition of our subscriber-only SinoWeekly Plus newsletter. Subscribe to SinoInsider to view past analyses in our newsletter archive.

On Feb. 13, the PRC State Council announced that Zhang Xiaoming, the director of the Hong Kong and Macau Affairs Office (HKMAO), would be demoted to deputy director with responsibilities over daily operations.

Our take:
1. International commentary on Xia Baolong paints him as a “hardline” long-term ally of Xi Jinping. A closer look at Xia’s career reveals a more complex picture.

Xia began his official career in Tianjin, a Jiang faction stronghold. In 2003, he was transferred to Zhejiang Province to serve as deputy Party secretary, which suggests that he was being groomed to take over provincial leadership positions. Between January 2004 to June 2007, Xia also concurrently served as Zhejiang Political and Legal Affairs Commission chief, a job which at that time was reserved for officials whom the Jiang faction-controlled political and legal affairs apparatus trusted to oversee the sweeping persecution campaign against the Falun Gong spiritual discipline. However, Xia “lost” the Zhejiang PLAC job after June 2007 and was only promoted to acting Zhejiang governor in 2011, or eight long years after he became the province’s deputy Party secretary. Thus while Xia Baolong owed a good part of his career to the Jiang faction, his relative lack of career progression during the Jiang era suggests that he either does not have strong factional allegiances to the Jiang faction or the Jiang faction does not fully trust Xia enough to elevate him to higher office.

Xia’s career also shows that he belongs in the category of officials that Xi trusts sufficiently to not purge and even place in key positions but not enough to be considered an ally. Xia and Xi were once colleagues in Zhejiang in 2003; Xi was then serving as Zhejiang Party secretary and Xia was his deputy. After Xi took office in November 2012, Xia was promoted Zhejiang Party chief in December 2012. In 2016, Party central selected Zhejiang as one of three areas to pilot the National Supervisory Commission system and Xia Baolong saw to it that Zhejiang was the first of the three areas to implement the system; Xia also called on local officials to dedicate themselves to the Xi leadership’s supervisory reform work. Xia Baolong’s show of loyalty to Xi seems to be a reason why he was promoted to a vice ministerial position in the national CPPCC (vice chairman and secretary-general) after stepping down as Zhejiang chief in 2018 due to age reasons (Xia was then 66).

Meanwhile, the general consensus that Xia Baolong is a “hardliner” because he oversaw the demolition of Christian crosses on churches in Zhejiang in 2014 does not hold water. The hardline campaign to tear down religious iconography during that period was a nationwide initiative that was not limited to Zhejiang; the campaign seemed more severe in Zhejiang due to the prevalence of churches in the province. It is also difficult to establish that Xia is a genuine “hardliner” given that he failed to hold on to his provincial PLAC chief job during the period when the CCP political campaign against Falun Gong was at a high-water mark (2004 to 2007) and saw his career stagnate for several years more; in contrast, officials like Zhou Yongkang and Bo Xilai were rapidly promoted up the ranks for enthusiastically advancing Jiang Zemin’s hardline political campaign.

Some commentators believe that Xi Jinping is going to get tougher on Hong Kong with the appointment of the “hardliner” Xia Baolong as HKMAO director. However, we have established in the previous paragraph that describing Xia as a “hardliner” is a misnomer. And if Xi does indeed wish to clamp down harder on Hong Kong, there is no one better suited for the job than Xia’s immediate predecessor Zhang Xiaoming; Zhang has amply demonstrated with his inflammatory rhetoric and with the Hong Kong government’s handling of the anti-extradition bill protests that he is the best candidate to oversee an escalation in the CCP’s hardline policy towards Hong Kong. Thus, it makes little sense for Xi to replace Zhang unless he is considering alternative solutions to resolving the CCP’s Hong Kong crisis.

2. We believe that Xi Jinping’s reasoning for appointing Xia Baolong as HKMAO director is similar to the reasoning behind the appointment of Luo Huining as Hong Kong Liaison Office boss.

The Xi leadership is almost certainly looking to reevaluate its Hong Kong strategy after failing to suppress the anti-extradition bill protests and witnessing the crushing defeat of the Hong Kong pro-establishment camp in local elections for district councilor. Before rolling out a new Hong Kong strategy or policy, Xi would likely want to gather fresh intelligence, get a more accurate read of sentiments on the ground, and find ways to marginalize or work around the entrenched Jiang faction networks in the Hong Kong and Macau affairs apparatus. Thus, it makes sense to appoint Xia and Luo, two retirement age officials no political baggage in the Hong Kong and Macau affairs apparatus (criteria that allows them to be more impartial in their new jobs and ensures that they are less likely to be compromised) yet who have Jiang faction associations and also demonstrated loyalty to Xi (criteria that mitigate complications arising from the factional struggle).

It should be noted that strategic and policy reevaluation on the part of the Xi leadership does not entail a relaxation in the CCP’s hardened stance on Hong Kong. We see no evidence that Xi or the CCP plans to shift away from the tough stance that has been in place since December 2019. However, the reevaluation period does afford the Hong Kong people “breathing space” of sorts to regroup and plan their next move. The outbreak of the coronavirus (COVID-19) on the mainland would also force the CCP to think twice before attempting to quickly ram through the national security legislation Article 23 in Hong Kong.

3. The demotion of Zhang Xiaoming offers some insight into the state of the CCP factional struggle between the Xi camp and his political rivals.

The fact that Zhang was demoted and not purged suggests that Xi Jinping still lacks “quan wei” to move decisively against his main political opponents, including the Jiang faction. Yet seeing how the demotion of Zhang could go through indicates that Xi currently has a very slight advantage over his rivals in the factional struggle stalemate. And if Xi’s rivals are planning to take advantage of the coronavirus outbreak to launch a coup against him, then the demotion of Zhang can be considered to be a move by Xi Jinping to put would-be coup plotters on notice.