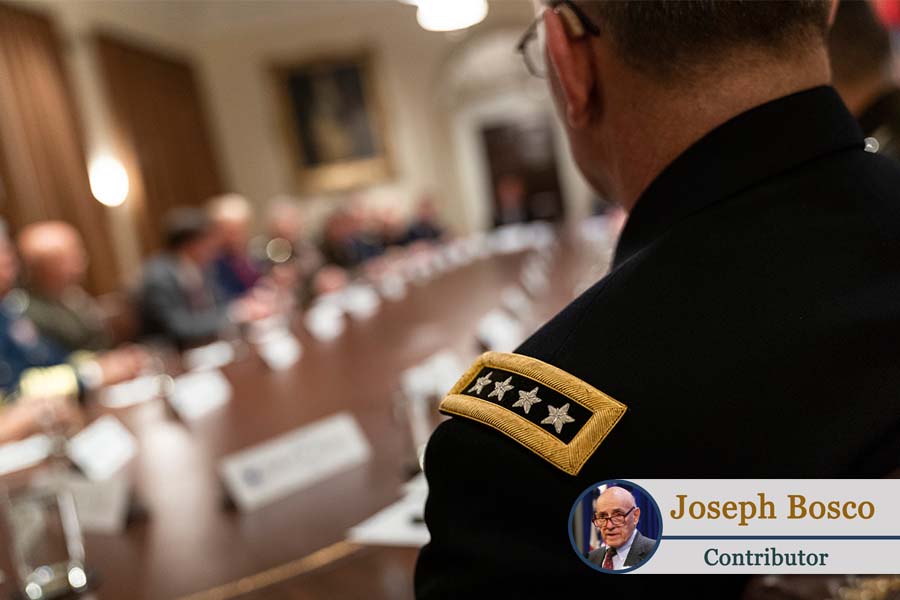 Item: North Korea recently warned the United States to act “wisely” on nuclear negotiations in the next two months, or relations will return to “a state of belligerency.” To reinforce the message, it has launched as many as a dozen ballistic missiles and related projectiles in recent months.

Item: China, after a four-day meeting of the Communist Party’s Central Committee, announced it soon would implement measures to “safeguard national security” in Hong Kong.

Neither government specified what it is prepared to do to achieve its objectives, but, given the nature of the two communist regimes, some form of aggressive action is likely.

Providing a context for these and other issues embroiling the East Asia security situation, Secretary of State Mike Pompeo addressed the Hudson Institute last week and outlined administration thinking in a historic speech on “The China Challenge.” He promised future messages to flesh out specific components of the multifaceted challenge.

The secretary did not mention North Korea specifically, but much of his language necessarily encompasses China’s duplicitous role in the nuclear and missile threat posed by its junior partner in Pyongyang: “[W]e’re finally realizing the degree to which the Chinese Communist Party is truly hostile to the United States and our values, and its worst deeds and words and how they impact us. … [N]ow we know that China threatens America’s national security by developing asymmetric weapons that threaten our strategic assets, too.”

In fact, North Korea itself has emerged as one of hostile China’s major asymmetric weapons against the United States and its regional allies. Beijing has used the escalating threat from Pyongyang’s nuclear and missile programs as a significant geostrategic distraction for the United States. The mounting danger from Pyongyang conveniently obscured what China itself was doing all along to build its military and implement an aggressive strategy from Northeast to Southeast Asia, and in the East and South China Seas and the Taiwan Strait.

Further, while diverting America’s resources and attention, Beijing successfully positioned itself as a reliable good-faith negotiating partner in the eyes of one U.S. administration after another. It has skillfully harvested unearned Western goodwill and insulated itself from criticism for its aggressive posture toward Taiwan and in the maritime domain, its predatory trade practices, its deplorable human rights abuses, its cyber theft and other violations of international law and norms.

Using its veto power on the United Nations Security Council, China shielded North Korea from the most crippling sanctions, then helped it survive the watered-down penalties. Working with Russia and other malign actors, it has also undermined U.S. sanctions. The pattern always was to do just enough to be seen as a responsible international stakeholder, but not enough actually to change North Korean behavior.

Finally, just as the administration’s maximum pressure campaign appeared about to bear fruit at the planned summit between President Trump and Kim Jong Un in Singapore in June 2018, Xi Jinping intervened. Having never bothered to meet Kim since Xi came to power in 2013, when U.S.-North Korea crises were simmering over nuclear and missile tests, Xi suddenly summoned him to Beijing only three months prior to the summit. Thereafter, North Korea’s positive attitude abruptly deteriorated and the old hostile rhetoric returned. Kim remained ostensibly committed to undefined denuclearization, but it was evident his substantive posture had hardened, and the Hanoi summit in February 2019 collapsed in failure.

While Kim’s attitude toward the U.S. president remained surprisingly cordial on the surface, his regime directed its diatribes against Secretary Pompeo and former national security adviser John Bolton as “hostile to the DPRK for no reason, preoccupied with the Cold War mentality and ideological prejudice.”

Foreign Ministry adviser Kim Kye Gwan said last week that time is running out on Kim Jong Un’s pledge to “wait with patience until the end of the year for the United States to come up with a courageous decision.” Senior North Korean official Kim Yong Chol warned that U.S. negotiators would be “seriously mistaken” to ignore both Kim’s deadline and his “special relationship” with Trump.

Pyongyang’s strategy is clearly designed to cause a rift within the U.S. administration by accusing “Washington political circles and DPRK policymakers” of advocating positions “[c]ontrary to the political judgment and intention of President Trump.” The departure of Bolton undoubtedly was seen as a victory.

More recently, North Korea may have been encouraged to hang tough by what was widely seen as a U.S. capitulation to pressure from Turkey, abetted by Russia, to abandon the Kurds in Syria.  China also probably took heart from the self-imposed Syrian setback, which unfortunately diminished the administration’s brilliant success in tracking down and eliminating ISIS leader Abu Bakr al-Baghdadi.

President Trump rightly wishes to avoid unnecessary wars, but history teaches they are more likely to be caused by perceived weakness than by demonstrations of strength. If the U.S.-China stakes are as high as Secretary Pompeo has warned, the administration needs to place the North Korea confrontation entirely within that existential context.

That means returning to the maximum pressure campaign that enabled the initial progress with Pyongyang until China’s unhelpful intervention. And it means stepping up the secondary sanctions on Beijing for undermining the primary sanctions on Pyongyang, which the president once said was “OK.” Beijing is content to see the crisis continue to fester for years, until Trump or his successor throws in the towel and accepts a nuclear North Korea. Trying to negotiate leniency on North Korea for illusory Chinese concessions on trade will result in an additional double loss for America.

Instead, as part of a renewed and expanded pressure campaign, the administration should exploit communist China’s greatest vulnerability. The secretary touched upon it in his speech:

“[W]e can see China’s regime trampling the most basic human rights of its own citizens — the great and noble Chinese people. We’ve seen this in Hong Kong, where they need to live up to their promises and commitments, and we’ve seen it in the gross human rights violation of ethnic minorities in Xinjiang.”

Speaking the truth about America’s commitment to universal human values is our greatest strength, as President Ronald Reagan proved in the Cold War. It was instrumental in bringing down the “Evil Empire” of the Soviet Union. Now it is time for President Trump to follow that example against the emerging Chinese communist empire and its willing ally in North Korea.