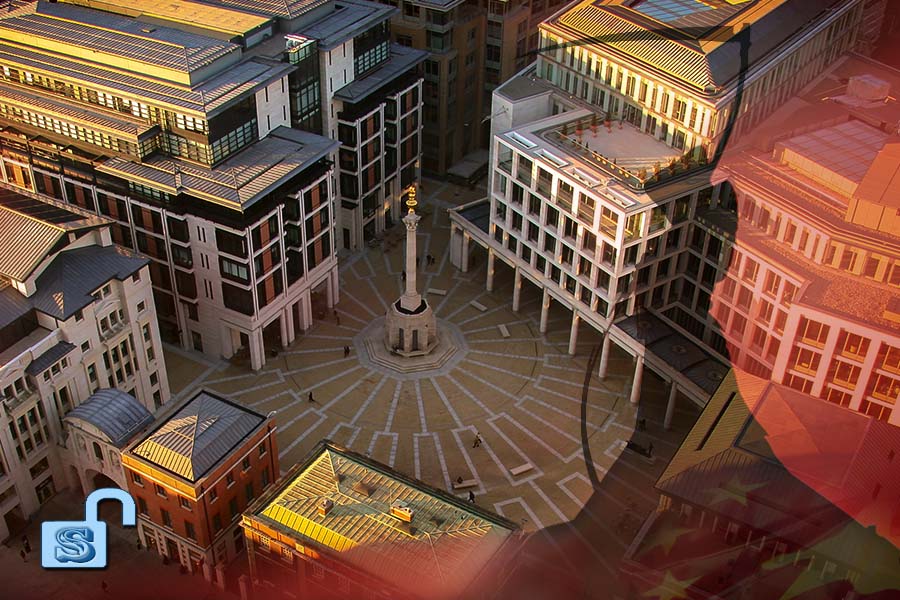 ◎ We have reason to suspect that the CCP has strategic intentions behind the HKEX move for the LSE.

In early September, the Hong Kong Exchanges and Clearing Ltd (HKEX) made a surprise bid for the London Stock Exchange Plc (LSE). The LSE rebuffed the bid, and the HKEX ended its takeover attempt in early October.

We have reason to suspect that the Chinese Communist Party has strategic intentions behind the HKEX move for the LSE.

The backdrop:
On Sept. 11, the HKEX made an unsolicited, $39 billion takeover approach to the LSE. As part of the offer, the LSE would have to abandon a $27 billion deal which it was working on to acquire Refinitiv, a data and analytics company owned by Blackstone Group Inc and Thomson Reuters Corp. LSE shareholders would get 2,045 pence in cash and 2.495 newly issued HKEX shares. Further, the HKEX plans to apply for a secondary listing of its shares on the LSE if the deal is successful. A successful merger would see the HKEX become the main shareholder of the combined exchange with a 59 percent stake. The HKEX also sold the deal as a way of providing London with a major gateway to the Chinese economy. The LSE owns the Milan exchange and has a substantial U.S. presence through its FTSE Russell index subsidiary and its derivatives clearing house LCH.

On Sept. 13, the LSE rejected the HKEX’s bid on strategic grounds and said that it would instead continue pursuing its acquisition of Refinitiv. In a statement, the LSE noted that the HKEX’s valuation of it fell “substantially short” and that the “ongoing situation in Hong Kong” adds to shareholder uncertainty; massive and disruptive protests against a controversial extradition bill had been flaring in Hong Kong since June when the HKEX made its bid. “Accordingly, the board unanimously rejects the conditional proposal and, given its fundamental flaws, sees no merit in further engagement,” read the LSE statement.

On Oct. 7, the HKEX ended its takeover approach of the LSE. Under United Kingdom takeover rules, the HKEX cannot make another bid for the LSE for at least six months unless the LSE management agrees to an offer, another group makes a takeover bid for the LSE, or other events were deemed to be a material change in the LSE’s situation.

Our take:
Among the common explanations for the HKEX bid for the LSE include UK companies becoming cheaper with the pound weakening due to Britain’s inability to settle on a Brexit deal, and the HKEX looking to make a major overseas acquisition to overcome uncertainty at home over the Hong Kong protests.

Here are some of the CCP’s likely strategic reasons for wanting a HKEX-LSE merger:
1. In the short-term, a HKEX-LSE merger around the People’s Republic of China’s 70th year anniversary on Oct. 1 would be great news for Hong Kong and China. The news of a successful merger would bolster both mainland and Hong Kong stocks, as well as deflect attention away from the Hong Kong protests.

2. In the middle-term, the CCP would want to stabilize the Hong Kong stock exchange, which has seen significant swings up and down as a result of global uncertainty over the Sino-U.S. trade war. A bid for the LSE, even an unsuccessful one, would create the impression of there being ample capital on the HKEX and being held by the Hong Kong government; given the links between Hong Kong and the PRC, international observers may also come to believe that the Chinese regime’s foreign exchange reserves and economy are still holding strong despite the trade war.

The CCP can ill-afford an underperforming HKEX over the medium to long-term. That is because many Chinese firms are listed on the Hong Kong exchange; there are 1,201 Chinese-funded corporate stocks on the HKEX (over 50 percent of the 2,395 companies listed on the exchange) comprising 68.3 percent of the bourse’s total market capitalization of about $3.9 trillion. The substantial mainland presence on the HKEX indicates that the Hong Kong exchange is simultaneously an important financial channel for Chinese companies and could easily be influenced or manipulated by the CCP.

3. Over the long-term, a HKEX-LSE merger benefits the CCP’s plans to dominate the globe (see the survival-dominance dynamic).

The LSE ranks among the world’s top 10 stock exchanges and is the second largest exchange in Europe. The LSE also wholly owns FTSE Russell, which covers 98 percent of the world’s investable market capitalization, and trades many government bonds, including U.S. Treasurys. Should the CCP gain control over the LSE via Hong Kong, it will gain access to data covering a sizeable chunk of global financial transactions and “expose” the workings of the Western financial system just when the PRC and the United States on the cusp of open “Cold War”-style conflict.

It is not beyond the CCP to make use of what it gained from a merged HKEX-LSE to pull off a financial “Pearl Harbor” attack against America, as well as target other Western countries.

Get smart:
If our analysis is accurate, then the CCP could be attempting one of the Thirty-six Stratagems, “obtaining safe passage to conquer the State of Guo” (假道伐虢), or borrowing the resources of an ally to conquer a common enemy before turning on the ally. Put another way, the CCP would attempt to ally or win over Western capitalists and countries to “borrow” their resources to later dominate the globe. But once the CCP becomes a global hegemon, all capitalists are in danger of being persecuted as the communist regime’s next “class enemy.”

Businesses, investors, and governments must carefully evaluate the political risks of doing business with China and not sacrifice long term interests for short term gains.