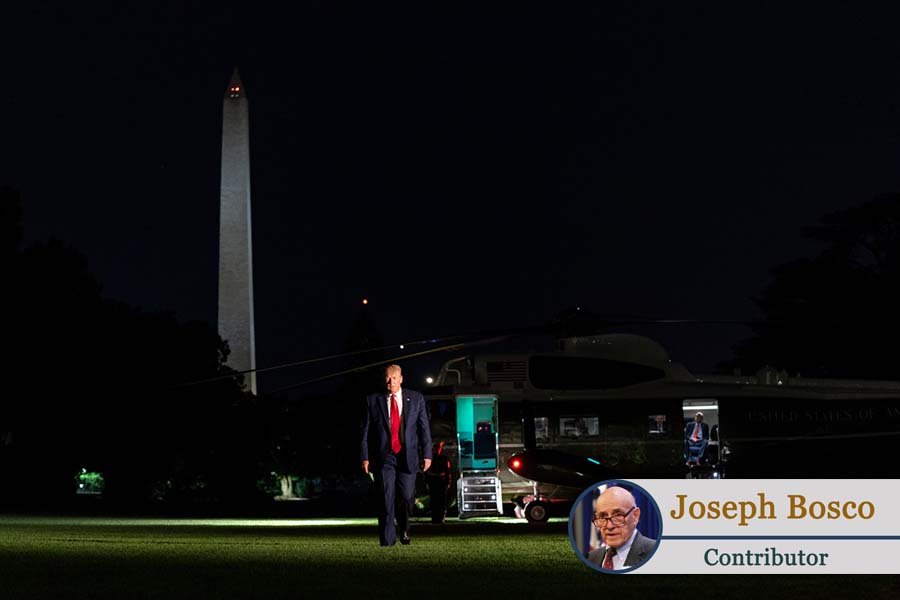 If Beijing unleashes a military crackdown on the city’s protests and brings it ever more tightly under Chinese control, it will put the final nail in the coffin of Deng Xiaoping’s “one country, two systems” formula for both Hong Kong and Taiwan.

If, on the other hand, Xi directs the Hong Kong authorities to accommodate the demands of the protestors, he will suffer some loss of prestige with hardliners in the People’s Liberation Army and political rivals within the Chinese Communist Party.

It could be defended against those internal critics as merely constituting a return to Hong Kong’s status quo ante prior to the despised extradition proposal and the earlier restrictions on Hong Kong’s autonomy.

But it would be seen widely by China’s super-hawks as two steps forward and two steps backward — really three, because it will have demonstrated to other dissatisfied groups within China that the regime can be defied successfully.

If Xi yields to that pressure, he can expect that Western revulsion will be manifested more concretely, and honestly, than it was after the Tiananmen Square massacre in 1989, precisely because of the guilt and shame governments felt after their craven return to business-as-usual then — and because Hong Kongers will have been deprived of something they already enjoyed under the promise of international agreements. The city’s status as a model of financial and legal stability will be shattered along with its usefulness to Beijing as a conduit to the civilized business world.

President Trump — who repeatedly has expressed sympathy for Xi’s dilemma — faces his own, but much less painful, choice. He can pursue the course he has been on for most of the duration of the building crisis, finessing it to the extent possible by mildly calling on both sides to show restraint with the hope that Xi will express his gratitude by coming to terms in the trade negotiations.

Or, he can throw America’s moral weight on the side of the Hong Kong people and risk China’s wrath and retaliation in the form of further bad-faith recalcitrance in the trade talks. That approach would have at least some impact on the United States economy and the stock market — and potentially complicate Trump’s reelection prospects. But not necessarily.

It also would be consistent with the universal principles of Western civilization and the finest traditions of America’s place in the world — welcoming Hong Kong as another “shining city on a hill.” It would provide the basis for a resounding presidential campaign speech and, for many doubters of Trump’s commitment to democracy and human rights, a genuine profile in courage.

But, for those who style themselves as political pragmatists and hardheaded realists, there are less altruistic reasons for the president to take a firm position in support of the Hong Kong people. Their struggle is bringing to a head the inherent self-contradiction within the Chinese Communist system that has been there since 1949: it is fundamentally incapable of meeting the human aspirations the Chinese people share with the rest of mankind.

As the people of Hong Kong are showing, and the rise and fall of dictatorships in South Korea and Taiwan and other places have demonstrated during the postwar era, even material prosperity, while certainly preferable to want and poverty, is not sufficient to fulfill the human condition.  People want their freedom and they want their identity as free people.

Like the Soviet Union before it, the new Chinese Empire ultimately will have to accommodate itself to that reality. It can make the transition bloody and painful, or it can work with the West to arrange a glide path to a soft landing as was done in South Korea and Taiwan. Hong Kong can be the model for “one system, many countries.”

President Trump has shown the remarkable ability to break new ground in challenging the longstanding, and ever-failing, Western policy rigidities toward China and North Korea, proclaimed enemies of America — while at the same time cultivating warm personal relationships with the brutal dictators who lead them. Sometimes, his policy directions seem to collide with the personal collegiality.

He has made many concessionary gestures to both Xi and North Korea’s Kim Jong Un in the hope than man-to-man forbearance and respect will generate official flexibility on critical policy differences and avoid the momentum to military conflict. In both cases, it is time to cash in the goodwill chips he surely has earned by now.

In the Hong Kong crisis, Beijing has played a bad hand badly and given Trump the final ace card he needs to provide a face-saving way out of his dictator’s dilemma.

Despite Trump’s diffident attitude toward Hong Kong until now, Beijing has tried to place the blame for its governmental malpractice on Washington, accusing it of playing a “black hand” to foment trouble.

Chinese spokespersons have gone so far as to publish personal information about State Department officials and their families, behavior that State’s spokesperson has called “thuggish.” The false charges and insults have gotten so inflammatory that, as State has declared, “they have gone from irresponsible to dangerous.”

President Trump has shown signs of taking a firmer stand on Hong Kong. He should insist that Xi reject those false charges, put the onus on the Hong Kong authorities, and press them to accommodate the demands of the protestors, including steps toward the autonomy promised under one country, two systems.

Trump can make clear to his Chinese friend that the United States is fully prepared to state its moral support for Hong Kong’s people and that any resort to force will be met by severe U.S. economic, diplomatic and information actions that will be seen and heard not only around the world, but throughout all regions of China.