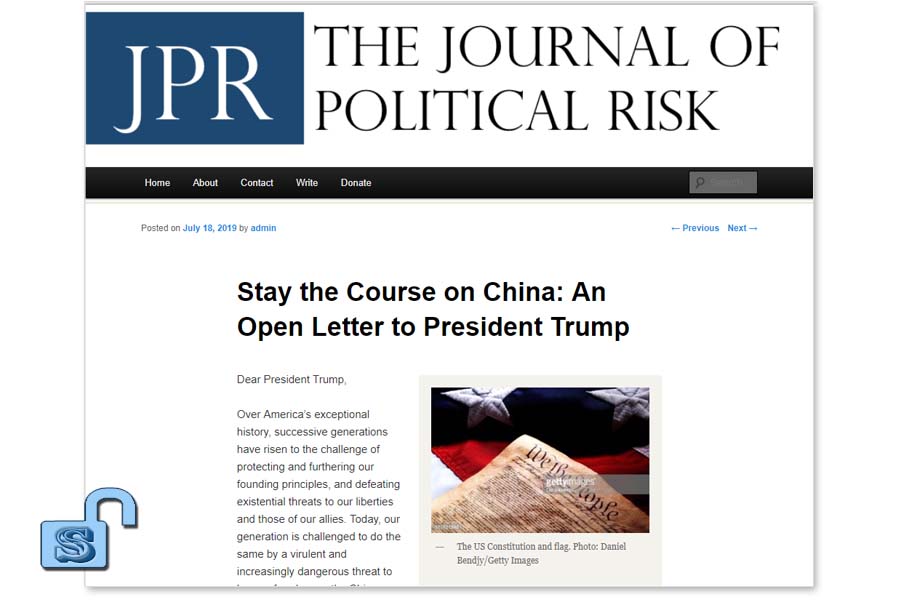 ◎ We believe that the CCP’s response to the “Stay the Course” letter reveals deep insecurities and fears.

On July 18, The Journal of Political Risk published an open letter addressed to U.S. President Donald Trump urging him to “stay the course” on China. The letter is a response to an earlier open letter, titled “China is not an enemy,” published in the Washington Post on July 3.

The “China is not an enemy” letter criticized the Trump administration’s China policy and called for policies that are largely in line with those of the “engagement” period of Sino-U.S. relations. It was signed by over 180 U.S. scholars, foreign policy and military officials, and members of the business community. The “Stay the Course” letter expresses support for the Trump administration’s China policy while strongly criticizing the Chinese Communist Party and the People’s Republic of China. It was signed by 130 veterans and former U.S. military and intelligence officials, scholars, Chinese dissidents, and other China watchers. (Disclosure: Three SinoInsider experts signed the “Stay the course on China” letter and responded to the “China is not an enemy” letter on July 7.)

Between July 19 and July 26, key CCP propaganda outlets published at least 19 articles in Chinese which directly or indirectly denounced the “Stay the Course” letter. The articles were published or mentioned in Xinhua, People’s Daily, Global Times, China Daily, CCTV, Guangming Daily, and Qiushi Journal. Prominent propaganda “columnists” like Xinhua’s “Xin Shiping” (homonym for “Xi Jinping”; the name implies a “new understanding of Xi Jinping) and People’s Daily’s “Zhong Sheng” (homonym for “voice of China” or “warning bells”) also published strongly-worded commentaries on the letter.[1] Finally, many of these articles were released on consecutive days between July 22 to July 26; during this period, Xinhua featured articles critical of the letter in the important articles section of its homepage.

Key criticisms of the “Stay the Course” letter by Party and state media include:

From the above, it is clear that the CCP is paying considerable attention to the “Stay the Course” open letter. The CCP has also mobilized a wide range of propaganda resources to dispute the letter’s points while reinforcing the Party line on how the PRC prefers the world to view China. Historically, the CCP tends to target “enemies” which it believes pose a legitimate threat to its rule with sustained and sizable propaganda attacks.

We believe that the CCP’s response to the “Stay the Course” letter, including the publication of the defense white paper, reveals its deep insecurities and fears. Below, we look at the letter’s message, signers, and the timing of publication to explain why the CCP reacted as strongly as it did.

Message
The CCP would perceive the following points in the “Stay the Course” letter as serious threats:

Many of the points above are based on factual observations found in Western and Chinese-language media, scholarship, and other research. The points about CCP behavior (propaganda, corruption, expansionism, militarism) are self-evident from its open actions.

From the CCP’s perspective, the letter has called it out in the most vulnerable areas, such as ideology and human rights, while exposing its propaganda and malicious behavior. More crucially, the letter clearly distinguishes between the CCP and the Chinese people; the CCP loathes an anti-communist campaign, particularly one that originates from the United States. Hence, the CCP has defaulted to using standard propaganda tactics in response to the open letter, namely, avoidance of debating the details of the letter’s criticism, denying all wrong-doing, name-calling (“Cold War fossils,” “zero-sum thinking,” “extreme”), deliberately conflating the China/CCP distinction in the letter, and heaping on more propaganda (“composition group” columns and the defense white paper).

The idea behind those propaganda tactics may be to “drown out” positive views about the letter in the Chinese language press while shaping the narrative on it to serve as ideological propaganda for domestic consumption. Put another way, the CCP is anticipating a Cold War-style ideological confrontation with America, and has moved to “seize discourse power” (搶奪話語權) early on by producing copious amounts of brainwashing (洗腦) propaganda intended primarily for a mainland audience. The CCP needs to “seize discourse power” on the anti-communist narrative because one of the things that it most fears is losing an ideological battle with America and the free world; once the minds of the Chinese people are lost, their hearts will follow, imperiling the CCP regime.

The intense CCP propaganda directed at the “Stay the Course” open letter can be debunked with its own propaganda: Why is the CCP paying so much attention to a “non-mainstream” letter written by a “miscellaneous troop” that holds “extreme” or “fringe” views?

Signers
A July 26 “Xin Shiping” article titled “The Absurdity of the Open Letter Can be Seen From its Signatories” offers insight into why the CCP is so concerned with the open letter.

The article first slams the letter’s author, James E. Fanell, a retired U.S. Navy Captain and a former director of Intelligence and Information Operations for the U.S. Pacific Fleet, for “fabricating sensational ‘China threat theories.’” The article then proceeds to number the letter’s signers with U.S. military backgrounds before noting that most of them are retired. After that, the article criticizes the signers from “so-called ‘think-tanks’ and civilian organizations” for producing works that show “strong hostility towards China” and “emit an antiquated Cold War stench.” Finally, the article notes that the letter’s list of signatories even contains “some heretical cult followers”; a PRC foreign ministry spokesman earlier identified the “heretical cult followers” as Falun Gong practitioners in his criticism of the open letter on July 22.

Based on our long-term research into the CCP, we believe that it feels the need to “expose” the background of the letter’s signers precisely because their respective backgrounds represent a serious threat to the CCP:

The CCP’s united front operations are designed to infiltrate and control non-communist groups while sowing disharmony in the ranks of its enemies. The CCP prizes its united front “magic weapon” because it deeply fears the reverse—a united front of anti-communist individuals and groups working in concert to rollback the CCP’s domination agenda. From the CCP’s perspective, the “Stay the Course” letter represents the emergence of the anti-communist united front, the undoing of the CCP’s external propaganda work, a coming ideological confrontation with America and the free world, and ultimately, the endangering of the CCP’s revolution.

Timing
The CCP would have noted that the “Stay the Course” open letter was published on July 18, or the day of the U.S. Department of State’s second Ministerial to Advance Religious Freedom. During the forum, U.S. Vice President Mike Pence and U.S. Secretary of State Mike Pompeo strongly criticized the CCP’s human rights abuses, with Pompeo describing the human rights crisis in the PRC as the “stain of the century.”

We previously wrote that “the CCP seeks to survive and dominate above all, and is paranoid enough to suspect the worst of its political and geopolitical enemies.” The CCP will not view as a coincidence the timing of the open letter’s publication and the holding of the State Department’s religious freedom forum. Putting two and two together, the CCP will very likely believe that the U.S. has simultaneously opened the ideological and human rights fronts against the PRC and is trying to win over the Chinese people (爭奪人民群眾)—a nightmare scenario for the CCP. And if the CCP believes that to be the case, then it makes perfect sense for it to mount a sustained propaganda campaign against a “non-mainstream” open letter signed by a “miscellaneous troop.”

Conclusion
We believe that the CCP’s intense propaganda campaign against the “Stay the Course” open letter could prove to be a double-edged sword. On the one hand, the CCP has successfully cast the letter as representing a dangerous but “non-mainstream,” “anti-China” voice in America. On the other hand, many mainland Chinese are used to “reading between the lines” of CCP propaganda and may become curious enough to “flip over the Great Firewall” to read the original English version for themselves. The sheer volume of criticism from the CCP could also potentially attract the attention of mainstream Western media outlets, who did not report on the open letter when it was published.