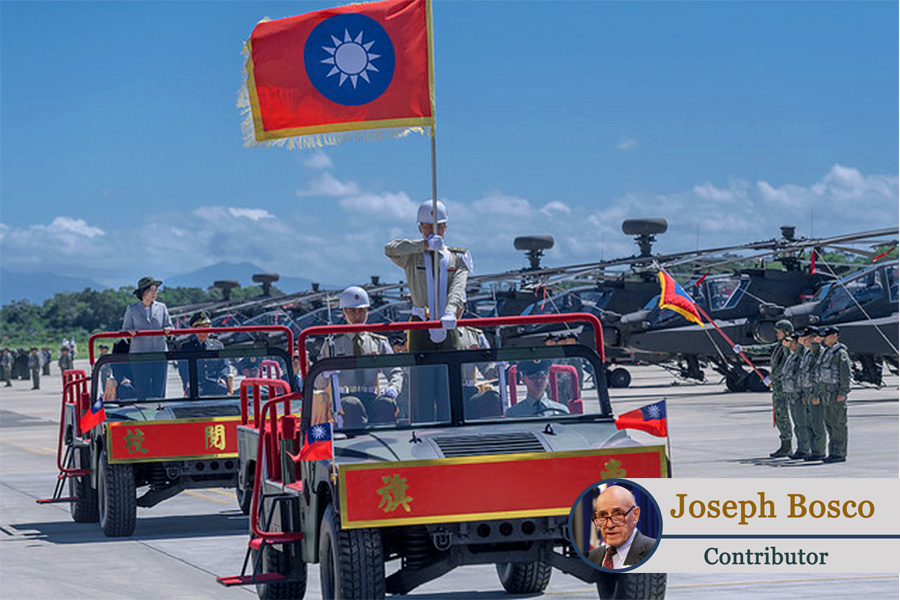 The ‘Taiwan Card’ and its Role in US-China Relations

◎ From Beijing’s perspective, virtually anything the United States does with Taiwan amounts to playing that particular “card.”

When two U.S. Navy destroyers passed through the international waters of the Taiwan Strait in early July, the head of China’s Taiwan affairs office accused Washington of “playing the Taiwan card.”

At the end of August, Taiwan’s President Tsai Ing-wen made “stopover” visits to Los Angeles and Houston on her way to and from Central America. The Chinese Foreign ministry again protested, stating once again that the United States had “played the Taiwan card.”

From Beijing’s perspective, virtually anything the United States does with Taiwan amounts to playing that particular “card.” Those events were not the first Taiwan-related occasions when President Trump and his administration have displeased Beijing, starting even before assuming office with his acceptance of a congratulatory telephone call from President Tsai in December 2016.

When China protested, Trump took offense at anyone telling him whom he could talk to. He doubled-down on his defiance of Beijing by calling into question the One China Policy, the founding document of contemporary U.S.-China relations—and gratuitously linked it to the question of China’s own trade practices.

While the president said as a courtesy to Xi Jinping he would inform him before making or taking future calls and has not publicly acknowledged speaking to President Tsai since then, as Beijing sees it, his administration has continued to play the Taiwan card in other ways.

He approved a long-delayed arms sale package; signed without reservation the Taiwan Travel Act encouraging higher-level and more frequent Taiwan-US visits and exchanges; dispatched a moderately high-level delegation to the opening of the new American Institute of Taiwan’s office building in Taipei; and approved the high-visibility Tsai transits that took on many of the trappings of official visits.

Demonstrating the close U.S.-Taiwan security relationship, Tsai was invited to tour NASA’s Johnson Space Center which is officially off-limits to Chinese visitors. The not-so-subtle American message to Beijing: the Taiwanese president and the country she governs are not part of China.

Beijing invariably objects to any official, quasi-official, or even unofficial interactions between the United States and Taiwan which it regards as a mere province of China. But it especially resents Washington using Taiwan relations as leverage against China on trade or other issues.

This is however a bit rich, since Beijing constantly links one problem area against another in its range of disputes with Washington. The most notable example is North Korea where China has massive leverage over Pyongyang and turns the pressure on and off as it suits Chinese strategic purposes against the West.

For more than three decades, China has played the North Korea card quite adroitly to posture as a responsible international stakeholder. By using the North Korea crisis to keep Washington and its regional allies off-balance, it has succeeded in extracting one concession after another on its unfair trade practices, the East and South China Sea disputes, human rights violations and of course, issues surrounding Taiwan.

Beijing’s double-dealing on North Korea became blatantly obvious as the Trump-Kim Jong Un summit emerged as a real possibility earlier this year. For decades, it sloughed off Washington’s pleas that it pressure Pyongyang to end its nuclear and missile programs by saying it was a bilateral problem for Washington to solve.

When Trump took up the challenge, dealt directly with Kim, and seemed on the verge of a breakthrough, Xi Jinping suddenly took interest and showed his hand. He summoned Kim to Beijing and put a damper on the process. China, in its own way, wants to keep playing the North Korea card.

The Trump administration has quietly made clear to China that there is a host of actions favorable to Taiwan still available in the economic, diplomatic, and security areas. Each of those actions is not only a “card” that can be played to punish China for its many abuses and incentivize it to change its behavior.

More importantly, they are essential to the deepening of U.S.-Taiwan ties in all those areas and will be carried out on their respective merits. The Taiwanese need have no fear of being merely a pawn or “bargaining chip” in the overall US-China relationship.

The recent National Defence Authorization Act calls for an expansion and deepening of US-Taiwan military ties and even greater cooperation in enhancing Taiwan’s military readiness. The president signed it without reservation.

Beijing is on notice that, unlike previous administrations, President Trump and his national security team are more than willing to match the long-standing bipartisan pro-Taiwan sentiment in the United States Congress. China can no longer count on exploiting divisions between the executive and legislative branches. Instead, Congress and the President together have a whole deck of Taiwan cards waiting to be played. Washington’s leverage over Beijing works to Taiwan’s advantage.

Joseph Bosco served as China country director for the Secretary of Defense from 2005 to 2006 and as Asia-Pacific director of humanitarian assistance and disaster relief from 2009 to 2010. He taught a graduate seminar on U.S.-China-Taiwan relations at Georgetown University’s School of Foreign Service. He is a non-resident fellow at the Institute for Taiwan-American Studies.