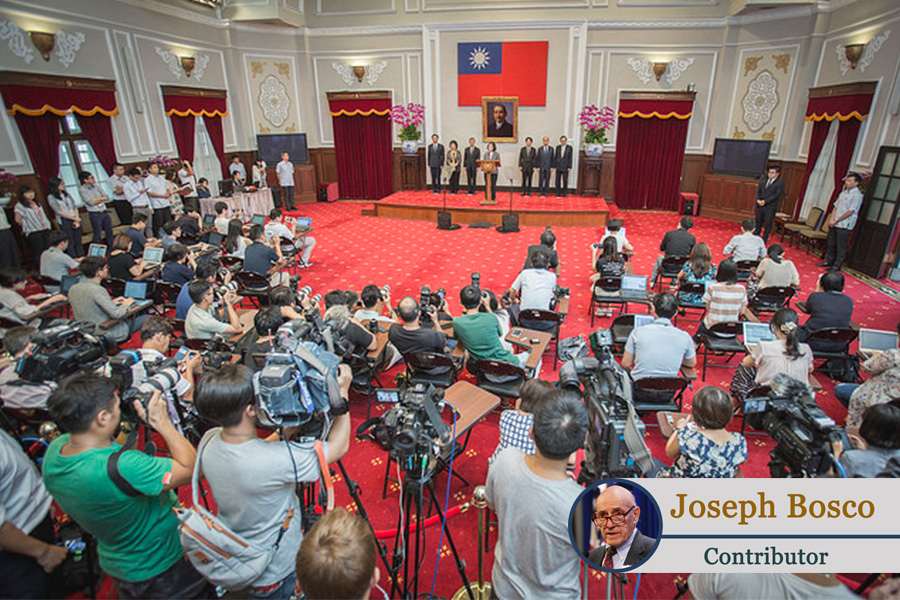 ◎ The People’s Republic of China has successfully defied the international order and is relentlessly remaking it in its own mold.

The People’s Republic of China has successfully defied the international order and is relentlessly remaking it in its own mold. Nothing demonstrates that dangerous reality more vividly, or sadly, than continued global regressions in the cause of human rights and democracy.

It once was hoped that engaging China’s communist regime, and welcoming it to the family of nations, eventually would modify its domestic and international behavior and encourage compliance with international norms, such as the Universal Declaration of Human Rights.

Instead, using the vast wealth it has accumulated, thanks to Western generosity and naivete, Beijing is replacing that noble statement of moral principles with its own operating rule: a Universal Declaration that Money Talks.

Two current events demonstrate the shameful mark the Chinese government is making on the world’s moral standards. Digging into its very deep pockets, Beijing has enticed the government of El Salvador to abandon its decades-long official relationship with Taiwan.

The shift in diplomatic recognition to the People’s Republic is the latest in an established pattern of buying up diplomatic partners among small, poor countries in Latin America and the Pacific Islands who find it impossible to resist the allure of Beijing’s abundant cash resources — in what University of Miami political science professor June Teufel Dreyer has called China’s “anaconda strategy.” Earlier this year, Dominican Republicand Burkina Faso also succumbed to Beijing’s financial pressures and broke ties with Taiwan. (Granted, Taiwan at times participated in this bidding war, but its efforts were defensive.)

Meanwhile, in what was East Turkestan before China’s 1950 invasion but now is Xinjiang Province, Chinese officials are conducting a campaign of political and religious repression that constitutes cultural genocide at a minimum.

With over 1 million Uyghurs confined to “re-education camps” under deplorable conditions, and reports of mass disappearances, the situation may devolve into an ethnic cleansing. If China is seeking to wipe out all or much of a religious or ethnic population, it would be guilty of meeting the United Nations definition of genocide.

The brutal facts of what is happening to the Uyghurs have been exposed to the family of nations. But the nations, including Muslim governments and populations quick to protest every perceived Western slight, have chosen not to get involved for fear of damaging their economic relations with China. Instead, as Beijing commits crimes against humanity, akin in some ways to Nazi Germany’s atrocities, the world conducts business as usual with the perpetrators, just as it did in the 1930s.

Not even one of the world’s great moral heroes was immune to the pressures of China’s financial inducements. As he prepared to run for president of South Africa in 1993, Nelson Mandela visited Taiwan. (He had been to China the year before.) For his lifelong contributions to freedom, democracy and justice, President Lee Teng-hui awarded him Taiwan’s highest honor for a foreign national.

Mandela, in turn, expressed admiration for Taiwan’s efforts to develop a free and prosperous democracy and praised its efforts to promote human rights and social justice.

The Republic of China, under the Kuomintang government, had longstanding diplomatic relations with the deClerk government, while Beijing had supported the black liberation movement. But the ROC strongly supported Mandela’s presidential campaign as Beijing threw its lot in with a rival to Mandela’s African National Congress.

Once he was elected in 1995, Mandela vowed that South Africa, the last major country still to recognize Taiwan, would continue to do so. He prided himself on being seen as a model to the world’s underdogs and he had developed an empathy for Taiwan. For two years he resisted Chinese pressures to cut ties with Taiwan.

But the country’s economic woes, after decades of apartheid rule, simply left no viable alternative to Beijing’s largesse and Mandela had to make a moral choice in the interests of the South African people.

In 1997, in what he described as an “agonizing” decision, he did what outsiders long had seen as inevitable and severed official relations with Taiwan, though he made the change effective a year later to allow Taiwan time to adjust — a courtesy President Jimmy Carter did not accord Taiwan in 1979.

Years later, Mandela expressed his pain at having been compelled to abandon Taiwan. After his death in 2013, Taiwan’s government mourned his loss and lauded his record as a driving force for freedom, justice, human rights and reconciliation.

Forcing one of the world’s moral icons to knuckle under for the sake of money no doubt was a signal achievement for China’s communist leaders. The Chinese people may not feel the same sense of pride.

Joseph Bosco served as China country director for the Secretary of Defense from 2005 to 2006 and as Asia-Pacific director of humanitarian assistance and disaster relief from 2009 to 2010.  He is a nonresident fellow at the Institute for Corean-American Studies and the Institute for Taiwan-American Studies, and has held nonresident appointments in the Asia-Pacific program at the Atlantic Council and the Southeast Asia program at the Center for Strategic and International Studies.