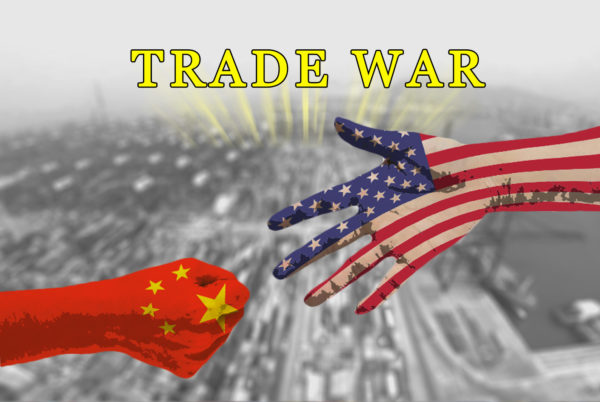 ◎ China, and not the U.S., would be more severely affected by China’s soybean tariffs.

In response to United States planned tariffs, China announced its own set of tariffs on April 4. China will levy additional tariffs of 25 percent on 106 American products, including soybeans, auto vehicles, and some types of aircraft. The goods target by the tariffs are worth $50 billion, and would only come into effect after the U.S. imposes its tariffs.

The backdrop:
April 3: The Trump administration proposes to levy 25 percent tariffs on $50 billion in Chinese imports as part of Section 301 investigations. The list of 1,300 tariffs items include products that are part of the Chinese Communist Party’s “Made in China 2025” strategy like aircraft parts, telecommunications equipment, and robots.

April 4: Trump tweeted, “We are not in a trade war with China, that war was lost many years ago by the foolish, or incompetent, people who represented the U.S. Now we have a Trade Deficit of $500 Billion a year, with Intellectual Property Theft of another $300 Billion. We cannot let this continue!”

Meanwhile, China’s vice finance minister Zhu Guangyao said at a press conference: “Now that the two sides have put the issues onto the table, it’s time for negotiations and cooperation.”

On the same day, U.S. trade representative Lighthizer said that he expects the U.S. tariffs to be imposed 60 days after its announcement, not 30 days as his office previously indicated. That means that the tariffs on Chinese products would not come into effect until at least early June.

Our take:
1. The U.S. and China are both exerting pressure before trade talks. Expect the CCP to eventually make concessions on the opening of China’s markets. Also, the Sino-U.S. trade war won’t be long, and the real economic war could be fought over currency.

2. China’s tariffs appear to target U.S. exports from Midwest states where support for Trump and the Republicans are strong. When imposed, the tariffs could impact the U.S. midterm elections.

3. China’s aircraft tariffs seem to be aimed at the Boeing 737 series and the 737 MAX 7 models, which are Boeing’s main export models to China. However, the tariffs wouldn’t impact Boeing much until at least after a few years, and Chinese airlines would be the ones to suffer more immediate losses.

When Trump visited China in November 2017, China Aviation Supplies Holding Company purchased 300 aircraft worth more than $37 billion (including orders and commitments) from Boeing.

Presuming that China continues to order 200 to 300 plus 737 aircraft each year, Boeing shouldn’t feel too much of a pinch when the tariffs hit. On March 13, Boeing celebrated its 10,000th 737 to roll off the production line. The firm presently has orders to produced over 4,600 737 aircraft, and should take more than seven years (going by a recent production increase from 47 to 52 jets a month) to deliver the orders.

4. China’s tariffs include all American import car models currently sold in China. But the American auto industry shouldn’t be too badly affected. For instance, the Ford Lincoln (64,700 sold) was the only American car which made the top 10 list of imported cars in China in 2017.

Luxury cars form the bulk of auto imports in China. But China’s tariffs would hardly impact the American luxury car imports. First, current tariffs for luxury cars in general are already steep. Next, the luxury car consumer base is a high-income population which tends to make purchase decisions on social status needs rather than price. Finally, China imports most of its luxury cars from Germany while American-made models account for less than 10 percent of its imports.

BMW and Mercedes, two best-selling luxury automakers in China, do manufacture cars in the U.S. for export to China. Both brands, however, could find a workaround with their supply chains to mitigate the impact of the tariffs.

American non-luxury vehicles also won’t be hit hard by China’s tariffs. General Motors has several plants in China, while Tesla is set to build a factory in Shanghai. Ford’s Lincoln division will be affected in the short term (Ford plans to start manufacturing the Lincoln in China starting 2019), but Lincoln only has a small market share in China.

5. China, and not the U.S., would be more severely affected by China’s soybean tariffs.

According to Chinese customs data, China’s grain imports account for 19.71 percent of the country’s total grain output in 2016. After factoring in the CCP’s tendency to fabricate data and smuggling issues, China’s grain self-sufficiency is only about 80 percent. In other words, China is very dependent on imports.

China is the largest export market for soybeans in the U.S. About 62 percent of American soybeans exports go to China, and China relies on the U.S. for a third of its soybean imports. In 2017, China imported a total of 95.54 million tons of soybeans, a record high.

China imports soybeans mainly from the U.S., Brazil, and Argentina. Because the U.S. is located in the northern hemisphere and South America is located in the southern hemisphere, they have opposing growing seasons and combine to export to China year round. China’s tariffs, however, would make finding alternatives to U.S. soybeans from other countries during its winter season very difficult. Also, should China increase imports of soybeans from Argentina and Brazil to make up for U.S. soybeans, the U.S. would eventually end up supplying the excess demand.

China’s tariffs would push up the prices of soybean oil, animal feed, and meat in China. Already, soybean meal prices rose by about 8 percent last week, or up 15 percent from the previous month.

6. The CCP’s strategy of targeting Trump supporters in the Midwest should not affect Trump much. Less than two percent of the U.S. population is engaged in agriculture, and even fewer would be affected by China’s tariffs. Meanwhile, America tariffs on Chinese imports protect the U.S. manufacturing industry where about 10 percent of the population is employed. Thus, Trump is expected to see a net increase in support by taking tough action against China.

7. Increasing tariffs on American imports would eventually cause China’s manufacturing sector to lose competitiveness. Uncompetitive Chinese manufacturers would then slash production and fire workers. When there are large numbers of unemployed and high food prices, the CCP regime is imperiled. Under these circumstances, the CCP has few good options save opening up its markets.