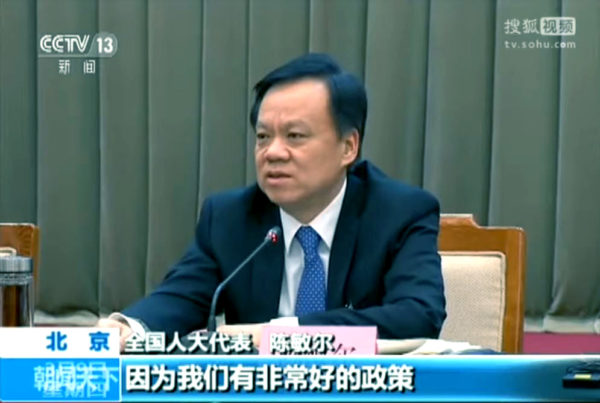 ◎ Chen Min’er’s remarks at the Two Sessions shows that the factional struggle inside the CCP is still very intense.

On March 6, Chongqing Party secretary Chen Min’er told the press on the sidelines of the Two Sessions meeting that the southwestern Chinese megapolis had yet to overcome the political problems left behind by his purged predecessors.

Chen said: “Since the 18th Party Congress, [Chongqing’s] political ecology has fundamentally improved. But the corruption of Bo Xilai and Sun Zhengcai touches many aspects, of which the most prominent is political corruption.”

He then praised Xi Jinping for his “wise and timely” purge of Bo and Sun before the 19th Congress, and for tackling “major hidden political dangers” and the “political pollution” in Chongqing.

The backdrop:
Bo Xilai, a Politburo member and Party secretary of Chongqing, was purged in March 2012, or before the 18th Congress that year. While Bo was officially purged for corruption, he was involved in a failed coup attempt against Xi.

Sun Zhengcai, also a Politburo member and Party secretary of Chongqing, was arrested in July 2017. During the 19th Congress in October, China Securities Regulatory Commission head Liu Shiyu said that Sun, Bo, Guo Boxiong, Xu Caihou, and other purged officials were not only corrupt, but were involved in a plot to “usurp the Party leadership.”

Our take:
1. Chen Min’er’s remarks at the Two Sessions shows that the factional struggle inside the CCP is still very intense. Indeed, if Bo Xilai’s “pernicious influence” hasn’t been cleaned out from Chongqing in the past six years, then the Xi administration’s effort to root out the remaining Jiang faction elements in the government and military is shaping up to be a long-term campaign.

2. The political problem that Chen highlights confirms our analysis of why Xi Jinping removed the presidential term limits.

To briefly recap, Xi is signaling to Chinese officials and his factional rivals that he isn’t a lame duck leader and has all the time he needs to purge the Jiang faction. Xi is locked in a life-and-death struggle with the Jiang faction because they have been plotting to dispose of him even before he took office in 2012. Faced with an existential threat, Xi proceeded to consolidate his authority over the military and the Party while arresting Jiang associates via an anti-corruption campaign. Having more fully consolidated power over the Party at the 19th Congress, Xi now appears to be strengthening his control over the state government through institutional reforms.