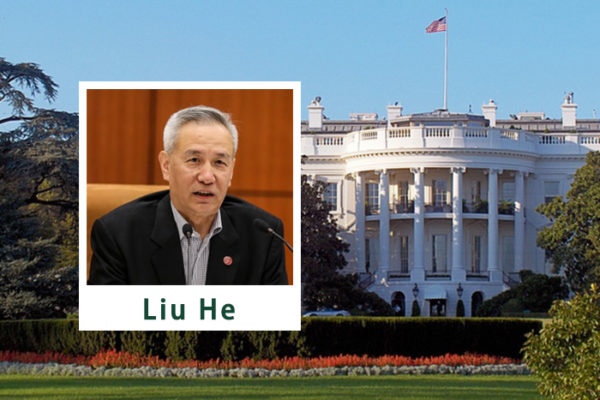 ◎ Liu visiting America during the Third Plenum period without a formal state post suggests that the CCP considers his trip to be of utmost importance.

China’s foreign ministry spokesperson Liu Kang said at a Feb. 26 press conference that Politburo member Liu He would be visiting the United States from Feb. 27 to March 3.

Liu, who is also the Leading Group for Financial and Economic Affairs director, will hold discussions on Sino-U.S. relations and trade with U.S. Trade Representative Robert Lighthizer and other American officials.

The backdrop:
August 2017: The U.S. launches a Section 301 investigation on whether China may be harming America’s intellectual property rights, innovation, or technology development.

Feb. 25: Several media outlets report that Peter Navarro, Trump’s policy trade advisor, could be promoted to assistant to the president and attend top strategy meetings. Navarro, the author of “Death by China,” is perhaps the Trump administration’s most hawkish voice on trade with China.

Also, the White House is reportedly planning to impose tariffs on hundreds of Chinese products using Section 301 in retaliation to China stealing U.S. intellectual property, according to Axios.

In the 1990s, the U.S. initiated three “Special 301” investigations against China. Both countries eventually signed a memorandum of understanding that China should strengthen intellectual property protection. Since the memorandum signing, however, the Chinese Communist Party (CCP) was discovered to have conducted national-level cyber attacks against the U.S. In particular, the June 2015 hacking of the Office of Personnel Management computers compromised the personal data of 4 million current and former federal employees. The Chinese regime later promised the Obama administration that China would stop cyber espionage and stealing corporate secrets. The Obama administration, however, didn’t follow up on the issue of intellectual property protection with China.

Why it matters:
The U.S. could soon enter into a trade war with China, a development which the CCP is very concerned about.

Our take:
1. We earlier wrote that Liu He may become the State Council vice premier in charge of finance and commerce. But presently Liu only has Party positions, and hasn’t yet been appointed to state office. Furthermore, Liu’s trip to the U.S. means that he, a Politburo member, will miss the important Third Plenum meeting from Feb. 26 to Feb. 28.

Liu visiting America during the Third Plenum period without a formal state post suggests that the CCP considers his trip to be of utmost importance.

2. Unlike previous administrations, the Trump administration has adopted a hawkish stance towards China. Trump is serious about resolving America’s trade imbalance with China, and will keep pushing the Xi administration it comes to a compromise with the U.S.

3. If the U.S. imposes its tough steel and aluminum tariffs, it will have a significant impact on the Chinese steel industry, where there is overcapacity, and the Chinese economy at large. And if Chinese workers end up losing their jobs, the CCP’s political legitimacy will be affected.