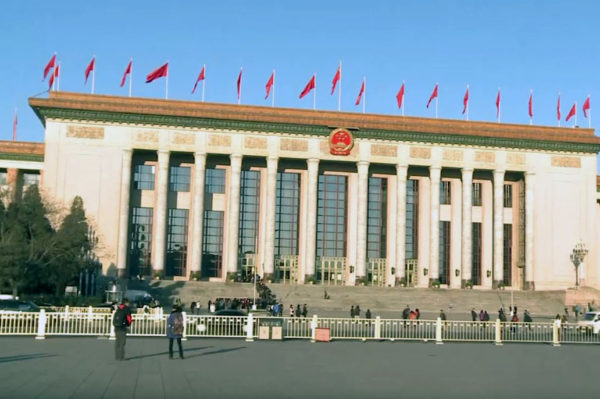 ◎ The announcement of the Second Plenum deliberations more than a month after the meeting suggests that Xi’s rivals may have voiced strong objections to the amendments.

Some key amendments include:
1. Adding “Xi Jinping Thought” to the state constitution, as well as other new terms and phrases coined by Xi during his 19th Party Congress speech. Examples include: “Great modern socialist country,” “reform,” “great goal of national rejuvenation,” “community with a shared future for mankind,” and “ecological civilization.”

5. Adding legislation to establish a National Supervision Commission, as well as related provisions such as restricting the Commission’s director to a two-term limit.

6. Removing term limits for the Chinese president and the vice president.

The backdrop:
At the conclusion of the Second Plenum on Jan. 19, the Central Committee issued a document on the constitutional amendments that were deliberated during the meeting. However, apart from an announcement that Xi’s political thought was added to the constitution and legislation for the new National Supervision Commission was passed, no other details were revealed then.

Our take:
1. The announcement of the Second Plenum deliberations more than a month after the meeting suggests that Xi’s rivals may have voiced strong objections to the amendments. Had Xi released the amendment details earlier, he could have incurred unwanted trouble.

2. Xi’s constitutional changes pave the way for him to implement significant political reforms in 2018 and beyond.

Hu, however, had started standing up to Jiang in his second term, and later ceded all his positions to Xi Jinping at the 18th Party Congress in 2012 to help Xi confront Jiang. After more fully consolidating power at the 19th Congress, Xi was able to reciprocate Hu’s support by according him the political status he should have via adding his “Scientific Outlook on Development” to the constitution.

4. Xi’s renewed emphasis on constitutionalism and the rule of law lays the groundwork for eliminating the Jiang faction.

Throughout his tenure as General Secretary, Xi has frequently signaled to the Chinese officialdom that he is rejecting Jiang’s policies through statements or actions that are taboo during Jiang’s era of dominance (1997 to 2012). For instance, Xi promoted a “constitutional dream” in his third speech after taking office in 2012, an idea anathema to Jiang, who allowed corruption, kleptocracy, and gross human rights violations to flourish. A month after Xi’s “constitutional dream” speech, his administration raised the notion of abolishing the labor camp system, and closed the camps a year later. Under Jiang, the labor camps were key torture and detention sites in the persecution of Falun Gong adherents, Jiang’s pet project. Furthermore, many of the officials purged under Xi’s anti-corruption campaign are members or associates of the Jiang faction.

5. The removal of term limits for China’s president and vice president allows Xi Jinping and Wang Qishan to remain in office indefinitely, or as long as they can continue to win re-election in the National People’s Congress (Wang isn’t vice president yet, but stands a high chance of winning election to that office). However, other national-level positions—State Council premier, National People’s Congress chairman, Chinese People’s Political Consultative Conference chairman, National Supervision Commission director—are restricted to just two terms (10 years).

6. To observers in Western democratic countries, Xi removing presidential term limits may seem like a hugely significant development. Some observers believe that Xi can break “norms” because of his immense authority and power. Our understanding of CCP factional struggle (neidou) and the nature of the CCP leads us to a different conclusion.

What drove Xi to consolidate power as quickly as he could is his life-and-death struggle with the Jiang faction. And despite having more fully strengthened his position at the 19th Congress, Xi still needs to eliminate his chief factional rivals and overhaul China’s political system. Failure to push through major political reform or purge the officialdom of Jiang elements would endanger his life and the lives of his allies, especially seeing how Xi has offended the entire Chinese officialdom with his anti-corruption campaign. So Xi needs to stay in power for as long as he can to finish what he started.