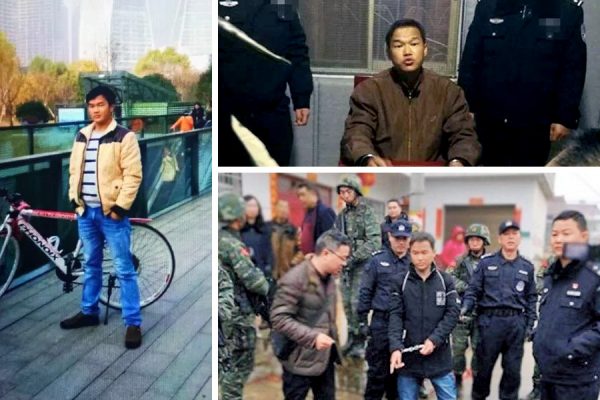 ◎ Social anger towards the authorities has resulted in fatalities.

On Feb. 15, the eve of the Lunar New Year, military special forces veteran Zhang Koukou murdered a local village despot and his two sons in Shaanxi’s Sanmen Village. Zhang, who murdered the despot in revenge for killing his mother 22 years ago, surrendered to the authorities two days later.

Zhang’s murder sparked intense discussion across the country. Most netizens believed that Zhang was a hero for avenging the death of his mother, citing examples from ancient China. Some netizens argued that Zhang was forced to resort to natural law when China’s legal system failed to deliver justice.

Most mainland Chinese news outlets reported the Zhang Koukou murder purely as a case of unlawful revenge killing and avoided moralizing the issue. However, a publication managed by China’s Ministry of Justice has gone against the grain of murder reporting in the country by exploring the motives of the murderer.

On Feb. 20, Daibai News ran an interview with Zhang Koukou’s sister and father. They talked about how the village despot murdered Zhang’s mother, and touched on how judicial corruption at the time led to a miscarriage of justice and sowed the seeds of Zhang’s revenge killing.

Daibai News is the official website of the justice ministry’s half-yearly “Law and Life” magazine.

1. Social anger towards the authorities has resulted in fatalities recently. Two cases that took place over the Lunar New Year period made the newspapers.

Feb. 18: In Chongqing, a motorcyclist killed a police officer who tried to book him for traffic violations.

Jan. 24: The 19th CCP Central Committee and the State Council issued a document notifying of a “sweeping black” drive.

Jan. 30: Xinhua publishes an article on the punishing of 29 Guangdong Public Security Bureau officials for being “protective umbrellas” to local criminal gangs.

Jan. 31: A Xinhua commentary notes that key to “sweeping black” elements is removing their “protective umbrellas.”

Feb. 13: The Central Commission for Discipline Inspection issues a document that emphasizes the intent and direction of the “sweeping black” campaign. The document calls on all discipline inspection units to investigate Party cadres and civil servants who are involved with organized crime and corrupt activity, serve as “protective umbrellas” to criminal elements, and who do not put in enough effort to clear out local mafia.

1. We earlier analyzed that Xi Jinping’s anti-organized crime campaign is chiefly targeted at the domestic security and legal apparatus, as well as grassroots officials. There is a possibility that the government-run news publication covered the judicial malfeasance and legal injustices experienced by the Zhang Koukou family to provide ammunition for Xi’s “sweeping black” drive.

Xi previously encountered resistance to his attempts to clean up the domestic security and legal apparatus. In 2016, Xi publicly weighed in on the side of Lei Yang, a state environmentalist who was wrongly identified as a criminal by five Beijing police officers and beaten to death. However, 4,000 Beijing public security officials protested the prosecution of the guilty police officers, and the local procuratorate didn’t press charges. The outcome of the Lei Yang incident was a blow to Xi’s prestige.

At the 19th Party Congress in October last year, Xi appointed trusted aide Zhao Kezhi as Minister of Public Security. Zhao later said at an expanded meeting of the Ministry’s Party committee that reforming the domestic security system would be an arduous task and that a “breakthrough” is needed in 2018.

2. Per the Chinese Communist Party’s propaganda norms, incidents that rouse the anger of the populace are usually downplayed within two weeks. However, state media is currently circulating two narratives on the Zhang Koukou case, one of which highlights corruption in the judicial system. This development is very abnormal, and should the narrative continue, it would indicate that Xi Jinping does plan to leverage on the Zhang case to tackle judicial corruption.