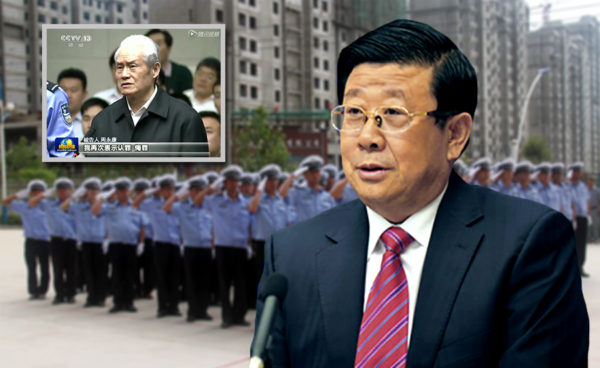 ◎ Zhao has criticized Zhou in at least six official meetings since taking office after the 19th Party Congress.

The backdrop: Zhao has criticized Zhou in at least six official meetings since taking office after the 19th Party Congress. He has also called on the MPS to remain loyal to Xi Jinping.

Before Xi became CCP General Secretary, the domestic security apparatus was controlled by the Jiang Zemin faction. When Jiang faction members Zhou Yongkang and Guo Shengkun was in charge, criminal cases in China shot up, and organized crime was rampant. The general public considered the MPS the most corrupt and murky government department, and it was the target of popular grievances. Furthermore, the Jiang faction tried to use the People’s Armed Police and public security officers in a coup attempt against Xi in 2012.

1. In his 19th Congress report, Xi mentioned the “supremacy of the constitution,” said there was a need for “rule of law,” and announced a new Leading Group for Advancing Law-based Governance. This is consistent with his policies in the past five years where he closed the labor camp system, talked about implementing the “rule of law” in China, and held officials accountable for past wrongdoing even if they are transferred from their office or retired.

But Xi’s earlier reforms was met with stiff resistance from officials of the domestic law and security apparatus. For instance, the five Beijing police officers who killed environmentalist Lei Yang in a case of mistaken identity were found not guilty.

2. Zhao Kezhi’s statements about Zhou Yongkang and the need for making breakthroughs in reform suggests that he is keen to implement Xi’s legal and security apparatus reform vision. We believe that a thorough purge of the public security apparatus is forthcoming.