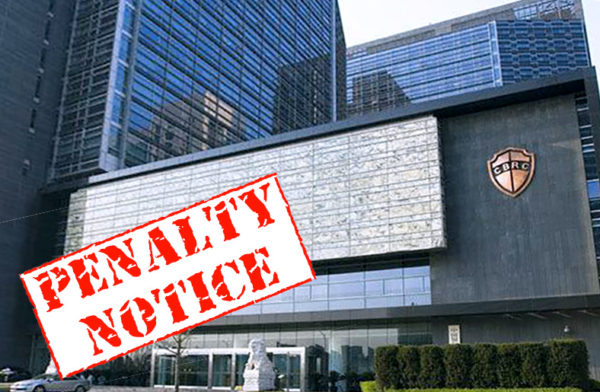 In the first two weeks of 2018, 13 China Bank Regulatory Commission provincial branches and sub-bureaus issued 76 violation tickets to various financial institutions. The total amount of fines to be collected was 56.1 million yuan (about $8.7 million).

Of the 76 tickets, 12 were handed to wealth management businesses for a variety of transgressions, and the firms were fined a relatively large sum. Violations of real estate industry policies were also strictly investigated. The bulk of the violation tickets were issued to businesses in Guangxi Province, while companies in Heilongjiang Province paid the most in fines.

Our take: As we earlier analyzed in our 19th Party Congress wrap-up article and our 2018 China outlook piece, the Xi Jinping administration will focus on cleaning up corruption and tighten supervision over the financial sector.

China has a massive financial and debt problem. Beijing hasn’t been able to rectify the problem because it is perpetually trying to rein in recalcitrant regional administrations. For instance, provincial governments have a tendency to react passively and negatively to Beijing’s warnings and strict financial policies, and Beijing usually relents and shoulders the financial burden of local administrations for the sake of political stability. In light of the Trump administration and United States Federal Reserve economic measures in 2017, however, Beijing is becoming iron-fisted with regional authorities to prevent China’s financial risks from exploding.