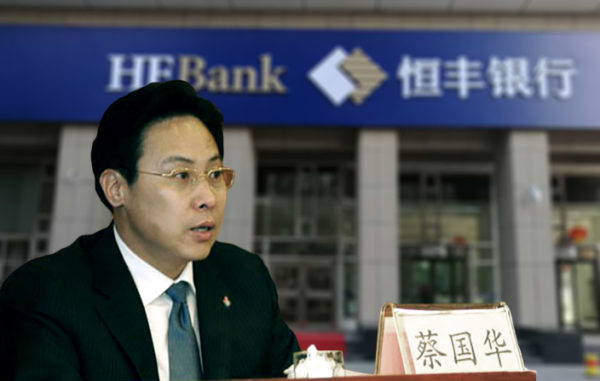 On Nov. 28, the Chinese authorities announced that Cai Guohua, the chairman of Hengfeng Bank (or Evergrowing Bank), was being investigated for severely violating Party discipline—a charge that points to corruption. The announcement came a year after Hengfeng Bank officials were found to have misappropriated public funds for personal use, carried out illegal equity operations, and other scandalous activities.

The Hengfeng case reveals three political hazards that foreign investors will face when taking up controlling stakes in Chinese banks as the Xi Jinping leadership focuses on eliminating corruption in the financial sector while lifting restrictions on foreign ownership of Chinese financial institutions.

Following the outbreak of financial scandals involving Hengfeng Bank in 2016, the China Banking Regulatory Commission (CBRC) launched a formal investigation on March 29. In August, the CBRC determined that the bank was a “typical case of unsound administration.” According to complete statistics, China’s various financial regulators issued a total of 13 infringement notices to Hengfeng Bank identifying issues with virtually all of their business, and fined the bank more than 13.5 million yuan (about $2 million).

Why it matters: After the 19th Party Congress, the Xi administration has been moving to more strictly regulate the financial sector.

In November, the new Financial Stability and Development Committee was set up, and regulators issued a draft guideline with stringent rules governing China’s asset management industry. Then at an annual meeting of city commercial banks on Nov. 23 and Nov. 24, China Banking Regulatory Commission vice chairman Wang Zhaoxing said that regulators will more rigorously supervise the industry and will mete out harsher punishment to rulebreakers. He added that commercial banks have repeatedly been caught carrying out all manners of financial fraud, including major shareholders siphoning funds from the bank through trusts, asset management, and repeated pledges of stock ownership.

On Dec. 9, 2016, Lin was abruptly dismissed and detained in his office for 12 hours. His secretary was also taken away by the police for a day-long investigation. Hengfeng Bank insiders and Lin’s relatives told the media that Lin’s dismissal and the treatment he received came at the behest of Cai, who suspected that Lin and Luan had jointly filed a report against him. In May that year, Chinese media reported that Hengfeng Bank executives had split 100 million yuan worth of public funds between themselves (Cai took 38.5 million yuan) between March and April 2015. Four months after the exposé, Luan, who had earlier left the bank, confirmed the media allegations and accused Cai of misappropriating the funds. Cai followed up by mobilizing 11,000 bank employees to file reports against Luan, and targeted several departments and staff in the bank for reprisals.

Luan Yongtai and Lin Zhihong might not be the only executives that ex-Hengfeng Bank chairman Cai Guohua sought to bring down. Former Hengfeng president Jiang Xiyun was investigated in Oct. 14 shortly after his retirement, a move that seems to have been orchestrated by Cai.

On Nov. 21, 2016, reputable Chinese financial magazine Caixin reported that Cai Guohua had transferred over 430 billion yuan out from the bank using various methods, and had also centered power in hands of Hengfeng executives through the ownership of various shell companies.

The Yantai City government and state banking regulator are presently trying to fix the mess left by Cai through equity restructuring, but the restructuring process may merely end up reshuffling power among various local interests groups.

For instance, the Yantai City government announced plans in February to allow local state-owned enterprises (SOE) to take up a state in Hengfeng Bank. However, state media China Youth Daily reported on Nov. 6 that Shandong Luxin Investment Holdings Group Co. Ltd has been trying to become a majority shareholder in Hengfeng Bank since 2007, but the SOE has never been successful because it was blocked by local interest groups and government agencies.

Based on our research, there are no changes to the political leadership of Yantai City. This indicates that the struggle over Hengfeng Bank’s shares is far from settled.