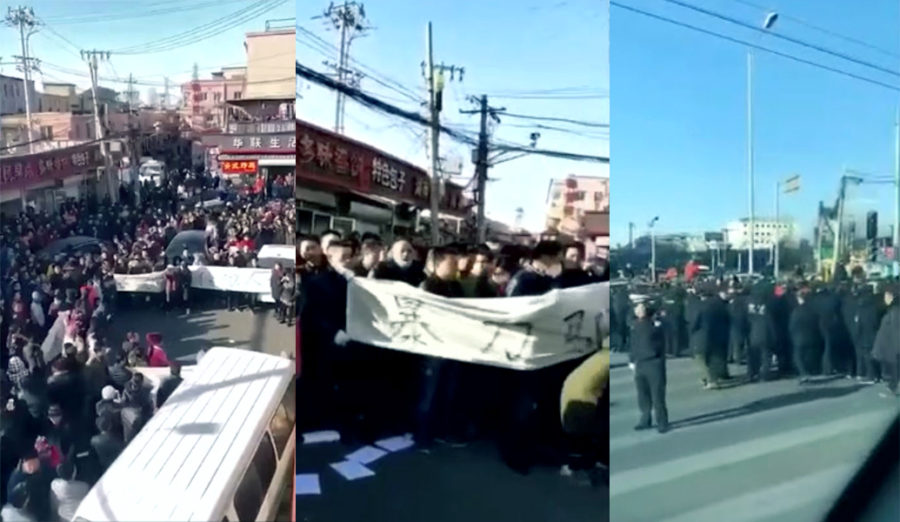 ◎ Over a hundred residents of Beijing Chaoyang District’s Feijia Village marched in the streets on Dec. 10 to protest the Beijing municipal government’s forced eviction of the “low-end population” from the city.

Over a hundred residents of Beijing Chaoyang District’s Feijia Village marched in the streets on Dec. 10 to protest the Beijing municipal government’s forced eviction of the “low-end population,” or migrant workers to the city.

Feijia Village is in Cuigezhuang Town, a town-level administrative area that is nearly 11 miles from Zhongnanhai. The protest, which happened to take place on Human Rights Day, saw Feijia residents carry banners with the words “violent evictions” and “human rights violation” as gathered in front of the Feijia Party committee headquarters. Many public security officers were on hand to keep an eye on the protesters.

A day after the Feijia protest, state media started to prominently promote Xi Jinping’s “corrective instructions.” Xi, the various reports said, has constantly stressed the need for Chinese officials to avoid “formalism, bureaucratism, hedonism, and extravagance” in carrying out their duties.

The backdrop: After a blaze in Beijing’s Daxing District claimed lives of 19 inhabitants of an illegal apartment on Nov. 18, the Beijing municipal authorities launched a 40-day “safety risk investigation” campaign to tear down illegally constructed dwellings. While the campaign was conducted in the name of “safety,” the Beijing municipal authorities seized the opportunity to evict migrant workers. The city’s officials have to meet a yearly population reduction quota.

Meanwhile, several mainland Chinese regions are having problems with a new directive to use natural gas instead of coal for government-provided central heating. Because the new central heating system hasn’t been fully installed in many areas and due to a shortage of natural gas supply, residents in northern provinces are freezing in the middle of the night when the central heating suddenly stops working. On Dec. 4, the Ministry for Environmental Protection issued an urgent directive postponing the transition from coal to natural gas use for winter heating.

Our take:
1. Various social issues that have cropped up in Beijing since the end of the 19th Party Congress, including the RYB Education kindergarten scandal, the mass eviction of Beijing’s “low-end population,” and the tearing down of signboards. The issues are generating a lot of negativity towards the Xi Jinping leadership, partly because Cai Qi, the Beijing Municipal Party secretary, is one of Xi’s associates.

2. The social issues are the inevitable outcome of Chinese Communist Party rule. Officials who come to power through non-democratic means tend to put their career advancement before the interests of the people. This governance problem can never be resolved no matter who is in charge of the communist dictatorship.

3. Our source close to Xi said that he is acutely aware of the need to remedy China’s economic and political problems, but he cannot proceed without honest people and upright officials.