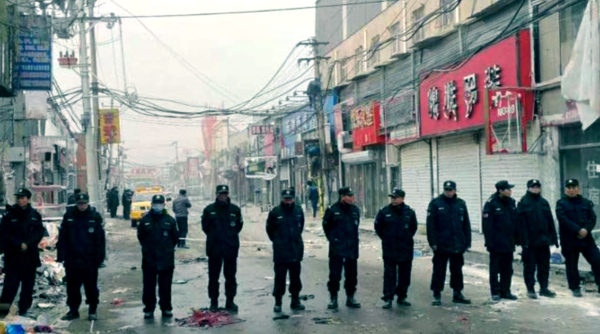 ◎ Eviction campaigns like the one in Beijing will exacerbate the already very intense social conflicts and heighten political risk across China’s provinces.

On Nov. 20, the Beijing municipal authorities launched a 40-day campaign to clear the city of subdivided apartments in industrial and suburban areas. The police then proceeded to evict the residents of these dwellings without implementing a proper resettlement plan or barely any advanced notice. These migrant workers, or “low-end population” in official documents, suddenly found themselves homeless in the cold Beijing streets. Their plight has engendered intense public debate.

The backdrop: The eviction campaign came after a fire in a low-cost apartment building killed 19 people on Nov. 18. Giving the reason that safety risks must be eliminated, the Beijing municipal authorities started mass evictions two days after the fire. According to estimates, at least 100,000 “low-end population” migrants, some of whom are actually from the middle-class, will be driven out of Beijing.

Chinese netizens are describing the eviction as Beijing’s “anti-Chinese” discrimination incident, a reference to the xenophobic and sometimes violent campaigns against overseas Chinese communities by locals. Other netizens compared the Beijing eviction scenes to those in the film “Schindler’s List” where Nazi troops cleared out a Jewish district. Influential scholars and individuals have sent open letters to the Chinese Communist Party (CCP) Central Committee about the callous handling of eviction by the Beijing municipal authorities. Some of these influentials even told state media that they loathe the CCP for driving away the poor and destitute, an irony given that the CCP claims to be leading people towards a classless society.

According to a State Council report released in September, Beijing plans to limit its population to 23 million by 2020. While there are about 21 million Beijing residents at the end of 2016, the number of “low-end population” people is unclear. The Beijing municipal authorities will likely issue yearly population reduction targets until the 2020 population figure is met, and this year’s target has already been issued to the governments of the city’s many districts.

Why it matters: The Beijing municipal government’s rough eviction campaign will inspire similar campaigns in other cities; Shenzhen is currently carrying out evictions. Such campaigns will exacerbate the already very intense social conflicts and heighten political risk across China’s provinces.

Our take:
1. The Beijing evictions is a negative consequence of political and economic policies enacted during Jiang Zemin’s era of dominance (1997-2012). Coastal and first-tier cities are relatively more prosperous than other areas, but economic inequality is growing, and the inhabitants of small cities and rural areas live especially hard lives. To make a better living, many Chinese become migrant workers in big cities like Beijing. This is why Beijing’s population density is high.

2. Beijing’s “migrant worker” issue stems from the hukou (house registration) system, which was designed as a form of population control. Chinese citizens are issued a hukou internal passport, and will not be eligible for social benefits (like buying apartments or school registration for children) outside the place they are born. This creates an artificial urban-rural divide and causes issues where “migrant workers” to Beijing are forced to live in low-budget apartments because they have no legal access to better living quarters.

3. Chinese officials are used to putting their careers before the interests of the populace. For instance, Xi Jinping plans to move the seat of the Beijing municipal government to Tongzhou District, but progress for the move is slow because it affects the interests of many local officials. Likewise, Beijing municipal officials could have approved of the recent mass eviction so that they can meet the yearly population reduction quotas.

4. Should the eviction of “low-end populace” become a country-wide phenomenon, it could be the spark that ignites the gunpowder of citizen discontent towards the CCP that has been building up over the decades. In this scenario, the CCP’s collapse cannot be ruled out.