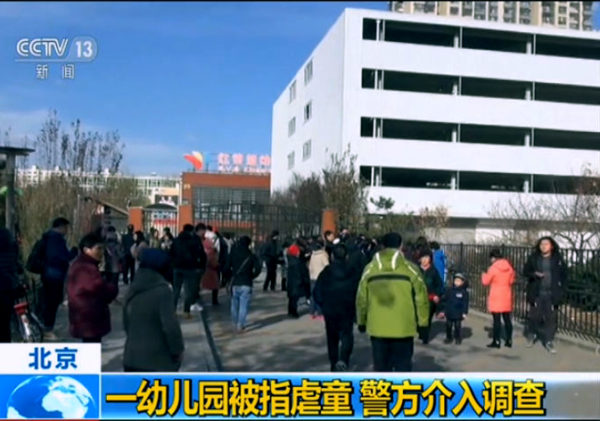 ◎ Mainland Chinese press has been carrying reports of child abuse by a kindergarten run by RYB Education since Nov. 22.

Mainland Chinese press has been carrying reports of child abuse by a kindergarten run by RYB Education since Nov. 22. RYB was listed on the New York Stock Exchange in September and raised $102 million with an offer of 5.5 million shares at $18.50 apiece.

RYB’s shares have plummeted since the scandal broke; as of Nov. 24, the shares are down 36.35 percent.

The backdrop: The RYB branch in question is New World kindergarten in Beijing’s Chaoyang district.

According to media reports, the husband of New World’s principal is from the 13th regiment of the third division of the People’s Liberation Army’s Beijing Garrison, and she had allowed the 13th regiment’s leading officers sexually assault her kindergarten’s children. The 13th regiment, nicknamed the “Tiger Group,” is the Beijing Garrison’s top unit, and is usually tasked with providing security for major state events.

Over a dozen parents with children who are in New World’s second grade told mainland news outlets that their children bore needle marks on their bodies, were given unidentified white pills, suffered corporal punishment, were locked in a dark room, and were molested. Four girls developed swelling in their lower body, while another girl was molested when she was in a stupor. A boy was found to be bleeding from his anus.

Chaoyang police began investigations on Nov. 23 after the parents filed complaints, and took away three teachers who were involved in the abuse. The following day, Feng Junfeng, the Beijing Garrison’s 13th regiment political commissar, officially refuted claims that his unit was involved.

The New World kindergarten is a bilingual international school. Children at the age of three are enrolled in their second grade. The preschool charges monthly fees of over 5,000 yuan (about $758), and applications are submitted a year in advance.

RYB Education was founded in 1998, and has 1,300 parent-child parks and nearly 500 kindergartens in over 300 cities in China, according to its website. On September 27, the company became the first Chinese preschool education service provider to be listed on the New York Stock Exchange. The company was worth $766 million before the scandal broke.

Why it matters: The scandal has inflamed Chinese society because children are especially valued in a country where the authorities have long enforced a one-child policy (replaced by a two-child policy in 2015).

Furthermore, the abused children come from families that are least from China’s middle class—a prominent group that the Chinese Communist Party (CCP) cannot afford to alienate if they wish to stay in power.