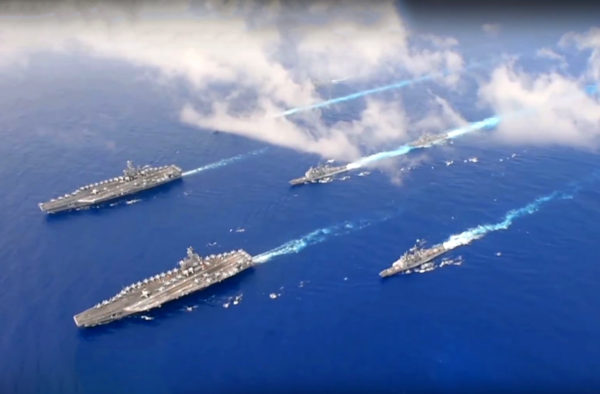 With North Korea unwilling to abandon its nuclear program and America dropping hints that the military option is on the cards in the event of further provocation, there’s an increased chance of conflict breaking out on the Korean Peninsula. However, external pressure against Pyongyang could end up triggering internal conflict in North Korea and lead to the downfall of Kim Jong Un.

1. Recent commercial satellite imagery shows a high-level of activity at the Punggye-ri Nuclear Test Site since North Korea’s sixth nuclear test. This indicates that Kim is not done with nuclear testing.

2. According to a Dec. 12 report by South Korean newspaper JoongAng Ilbo, North Korea’s top military commander and General Political Bureau director Hwang Pyong So and his deputy Kim Won Hong are currently being held in a detention center for political prisoners. In late November, South Korean intelligence noted that the two men were punished for “impure behavior.” Hwang was one of Kim’s most trusted advisor, and his detention could lead to a fresh round of purges in North Korea.

1. On Dec. 1, South Korea inaugurated a special military brigade that will seek to “decapitate” North Korea’s war command and secure its weapons of mass destruction in the event of an emergency.

2. When South Korean leader Moon Jae-in was in Beijing from Dec. 13 to Dec. 16, him and Xi Jinping said that they do not wish to see war break out on the Korean Peninsula.

2. In an interview with The Atlantic that was published on Dec. 14, U.S. Senator Lindsey Graham said that America has a 30 percent chance of using the military option against North Korea, and a 70 percent chance if North Korea tests another nuclear device.

3. China makes plans to build refugee camps in a county across the North Korean border, according to a Dec. 11 New York Times report.

4. On Dec. 16, hawkish retired general Wang Hongguang said that the Korean Peninsula would be in a state of high risk when America and South Korea hold its annual “Key Resolve/Foal Eagle” military drill in March.

5. Renmin University of China lecturer Shi Yinhong said on Dec. 16 that the probability of war breaking out on the Korean Peninsula is the highest it has ever been in years given the present situation.

1. Since the Xi-Trump April summit in Florida, the U.S. and China have proceeded to roll out the most stringent-ever sanctions against North Korea. When President Donald Trump visited Beijing in November, both him and Xi expressed their resolve to denuclearize North Korea

Our take: China, America, and North Korea all appear to be preparing for war. While the probability of conflict breaking out on the Korean Peninsula is quite high, there is room for alternative developments to unfold.

Kim Jong Un purging his former top advisor could unsettle his other senior officials and cause them to move against Kim (perhaps with some prodding from China and South Korea). The nuclear situation could be peacefully defused if Kim suddenly meets with an “accident” and is unable to rule North Korea.