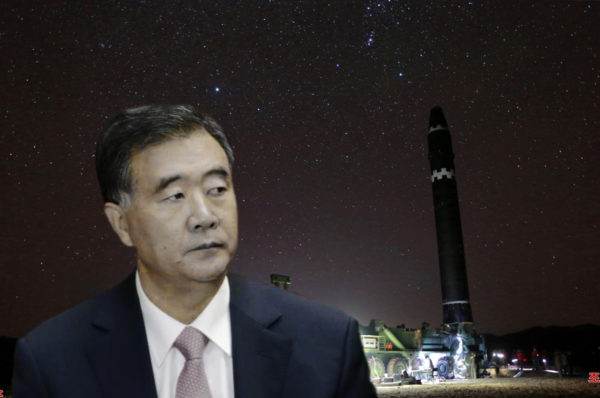 ◎ From China’s perspective, its number one priority is neutralizing the nuclear facilities near the Chinese border to prevent the possibility of a nuclear detonation.

New Politburo Standing Committee member Wang Yang met with Natsuo Yamaguchi, leader of Japan’s Komeito Party, on Dec. 1. According to Japanese media reports, Wang told Yamaguchi that China and North Korea are now in an antagonistic relationship over Pyongyang’s nuclear provocations. He added that China is opposed to Kim Jong Un’s nuclear testing, and hopes that chaos and conflict won’t break out on the Korean Peninsula.

Nov. 30-Dec. 3: The Chinese Communist Party (CCP) held a dialogue with various world political parties in Beijing. Nearly 300 delegates from over 120 countries and regions were in attendance. A day before the dialogue session, North Korea tested a new ballistic missile.

President Donald Trump spoke to Xi Jinping over the telephone, and “emphasized the need for China to use all available levers to convince North Korea to end its provocations and return to the path of denuclearization,” according to a White House statement about the call. Nikki Haley, the United States Ambassador to the United Nations, urged China to cut off crude oil supplies to North Korea.

Dec. 1: South Korea established its new “decapitation unit,” a special military brigade that will seek to take down North Korea’s war command and neutralize its weapons of mass destruction in the event of an emergency.

Dec. 4-Dec. 8: The U.S. and South Korea conduct a massive military exercise known as Vigilant Ace. About 12,000 U.S. troops and 230 fighter jets, including F-22 Raptor stealth fighters and planes stationed at U.S. military bases in Japan, are involved in the drill.

2) North Korea appears to have procured its nuclear material and imported technological know-how during the era of Jiang Zemin’s political dominance. Members of Jiang’s faction are also very close to the Kim family. If China and North Korea are now in opposition—a rare development given their communist heritage—then this suggests that the Xi leadership has rejected the North Korean policy of the Jiang era.

What’s next: If Beijing heavily sanctions North Korea but is unable to force Pyongyang to abandon its nuclear program, then there will be a higher probability of American military action. A joint Sino-US military operation cannot be ruled out.

From China’s perspective, its number one priority is neutralizing the nuclear facilities near the Chinese border to prevent the possibility of a nuclear detonation.